If the city we live in robs us of our movement, does it rob us of our agency? 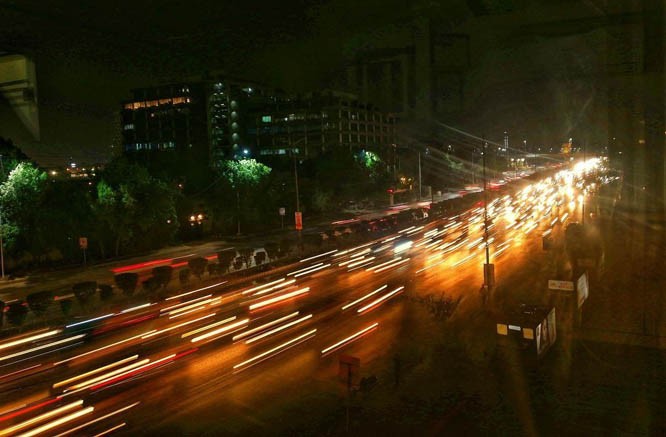 Big cities are all glitter: filled with opportunities, laced with money, jammed with people, sprinkled with parties. You can touch down in one not knowing a single soul, take a leap and become someone you’ve never been before. Their sheer size buys you anonymity, the chance to invent or reinvent yourself -- a gift that I think makes them magnetic to young people, particularly in their twenties, who haven’t yet signed up for the rest of their lives, but who are getting there seemingly slowly and essentially fast.

Loneliness is sewn into urbanity. The same vastness that buys you anonymity also buys you invisibility. But for all the cities I slipped through during my frenzied early twenties -- London, Barcelona, Berlin, New York -- the deep aloneness I felt never pierced the way it likely would have had I lived out one of those years arriving anew in Karachi, the city of my upbringing, which I eventually returned to when I struck 25.

Despite loving it profoundly, I have always suspected Karachi (bigger by far in numbers than all the aforementioned cities) is uniquely unfriendly to the lost and hungry twenty-somethings it clutches within it confines.

This suspicion was swiftly confirmed when I put out an open call, asking to speak to young people experiencing loneliness in the confounding seaside megacity I have called home all my life. My inbox immediately flooded with a barrage of messages from young men and women, some who had always lived here, some who had left and returned, some who had come from elsewhere for the first time. Some were students, others were professionals, and they ranged from 18 to 30 years old.

Until I spoke to them, I had leaned on writer Olivia Laing’s explanation (detailed in her book, The Lonely City) of what constitutes urban loneliness: "[it] doesn’t necessarily require physical solitude, but rather an absence or paucity of connection, closeness, kinship: an inability, for one reason or another, to find as much intimacy as desired." But many of the Karachi-dwellers I spoke to defined their loneliness more as an inability to connect with themselves than with other people.

"To me, loneliness is feeling like you can’t express who you are," 30-year-old Jahanzeb told me. "I feel a crisis because I just can’t be myself. My surroundings don’t allow it -- my family, my workplace, even the places I frequent socially. There’s a unique dimension to the loneliness young people tend to suffer here, that has nothing to do with how many people you’re surrounded by, but that is centered on an internal crisis."

We talked for a long time about the institution that rules Pakistani society: the family. Though the culture of living with one’s family into adulthood lends young people a firm layer of financial support as they embark on their own lives, it also lends them a layer of surveillance. "Your parents treat you like a three-year-old even if you’re thirty. You can’t have that on your head 24/7," Jahanzeb said.

"I fail to communicate my experiences and emotional needs to my family," said the 22-year-old Aliza. "I’m surrounded by them, but I don’t feel like they understand me." As I consider Aliza’s words, I am reminded of something a friend once told me, when I first came back to Karachi after living abroad -- that everybody here is socially incarcerated. Young people’s lives are structured so that they move from one institution to another -- the home to university and back again; or the home to the workplace and back again.

Most workplaces are hierarchies, leaving little room for a meritocratic rise. Young people, who have come of age with the Internet and have been exposed to drastic value shifts through their education and experiences, have different ways of doing things. When not given opportunities to take ownership of their work, they feel as restricted in the workplace as they do in the home. When you feel trapped in both the institutions you shuffle between, there is virtually no breathing room to experiment outside of them. One of the reasons for this is Karachi’s extreme lack of both non-privatised public spaces and safe, affordable public transport.

In his book, Happy City, journalist Charles Montgomery writes about how Enrique Peñalosa, the mayor of Colombia’s capital city, Bogotá, transformed the city from one plagued by drugs, crime, and poverty, to one of the happier ones in the world. "[He] threw out the city’s ambitious highway plan and instead poured his budget into hundreds of miles of cycle paths; a vast new chain of parks and pedestrian plazas; and a network of new libraries, schools, and nurseries. He built the city’s first rapid transit system using buses instead of trains. He hiked fuel taxes and banned drivers from commuting by car more than three times a week." Elsewhere, Montgomery quotes Peñalosa saying: "And what are our needs for happiness? We need to walk, just as birds need to fly."

If 27-year-old Unaiza lived in a city like Bogotá, would she be happier? "I live in Gulshan, I went to university in Clifton, and now work on I. I. Chundrigar Road. I have friends all over the place, but the geographical distances are painful to navigate on an everyday basis," she told me. In this way, she misses out on things -- not big parties necessarily, but the small, regular catching-up-over-coffee dates that lend everyday life its critical sheen of joy.

"All these restrictions make me feel like I’m not in charge of myself," 18-year-old Rania said, mentioning both the curfews imposed by her parents and the difficulty of getting around. "I am detached not just from the city, but from myself."

Rania’s words raise flashbacks of a conversation I had with a South African friend years ago, who was raised in Johannesburg. He told me about how a friend of his would be sent to Europe every summer, because his mother wanted her children to, "know what it was like to move through a city with a sense of agency." If the city we live in robs us of our movement, does it rob us of our agency? And if it robs us of our agency, does that eat away at the flowering of our identity? I would answer yes and yes. If we aren’t given the space to express our identities… then aren’t we made ever lonely, forced to live with the ghosts of who we could have been?

The right company -- platonic, romantic, and anywhere in between -- is critical to the alleviation of loneliness. By "the right company" I mean people with whom we don’t have to pretend, people who do not misunderstand us, people with whom we can be our true and best selves. In other cities, opportunities to meet these people abound -- and these opportunities are inherently connected to the fact that most young people live on their own, are searching for company, and can move freely as they search for it.

Also read: Friends in my phone

In Karachi, more often than not, young people are weighed down by both family obligations and expectations, and are limited in their access to spaces that are free of these pressures. What this creates is a city filled with people locked in their own loops, intersecting only when occasionally crossed. This radically reduces the spontaneous opportunities so fundamental to creating the friendships that contribute to and shepherd us through our own self-discovery. If we don’t have chances to make these new friendships, we struggle to grow.

There is another kind of company that Karachi prohibits: the solitary joy we can feel on our own. "If I was just given a chance to be alone, I would enjoy my own company, but I haven’t been able to do that here," an old friend, Amal, told me. "I was happy being alone abroad, here I get asked why I’m not married. That’s the problem -- I’m not allowed to feel alone." I couldn’t get over the irony of that: how Amal longed to be alone, in order to escape her loneliness.

There’s an infrastructure Karachi lacks when it comes to giving young people the freedom to find company, in others and themselves. There are few spaces to congregate and commingle; few spaces to roam through or linger in. Karachi simply doesn’t have what makes other cities infinfite. Driving back home after a single cup of coffee, or before it gets too dangerous to be alone on the streets after dinner, I recall café-hopping, meandering through parks, riding the undergroud without feeling anxious after midnight. That feeling that time can stretch on endlessly, that I am not being watched, that nobody is asking me where I am. That feeling that I can do whatever the hell I want, forever. These things were so fundamental to me, to my feeling of not being lonely even though I was alone. I didn’t understand how much it meant to me until after I had lost it.

There is a Yrsa Daley-Ward quote that often lights up in my mind when I think of big cities, "There are enough lonely people in this city to cure loneliness." It’s both not true and true when applied to Karachi. The presence of millions of lonely people alone will not produce the mechanisms needed to break down the structures that contain and divide them. But the knowledge that so many of us experience the same thing has got to count for something.

For me, Karachi has its un-lonely pockets, and though rare, they are generous when you find them. I worked to build an open relationship with my family, and I was aggressive in my approach to finding and making friends. These journeys did not come without their pitfalls, but they ultimately led me to a destination peppered with raucous laughter, early morning beach drives, late night chai runs. For now, it’s enough.