The first coup in Pakistan-I 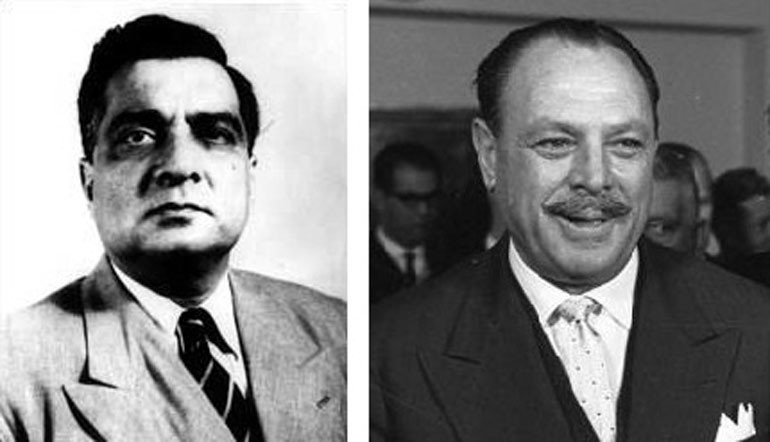 It was October 1958 that Pakistan witnessed the twin coups staged in quick succession by Maj-Gen Iskandar Mirza and General Ayub Khan. Iskandar Mirza, the first president of Pakistan, imposed the first countrywide martial law on October 7 and appointed Ayub Khan as chief martial law administrator (CMLA). After just 20 days, on October 27, 1958, the CMLA toppled the president and took over as an autocrat to establish a dictatorship that lasted for almost 11 years; only to be surpassed by General Ziaul Haq who ruled for more than 11 years (1977 - 1988).

In the first part of this essay we look into the events leading to the rapid rise of Iskandar Mirza culminating in his becoming president in 1956. In the second and final part, we will discuss the events from March 1956 to October 1958, the months that witnessed not only the promulgation of the first constitution but also repeated removals of governments by the president and finally the unravelling of the constitution itself that had come into being after nine years of constitutional, political, and religious wrangling.

Iskandar Mirza has an inglorious distinction of being the head of state just for three years and masterminding or overseeing the exit of six prime ministers in three years (1955 - 1958). So, who was this gentleman? Iskandar Mirza was born in 1899 in Murshidabad, Bengal, British India. He joined the British Indian army in 1920 and later moved to Indian Political Service.

After faithfully serving the British Empire, he was awarded the Order of the British Empire (OBE). He ultimately enjoyed the ranks of brigadier and Maj-Gen of Pakistan army after independence. In the newly-created Pakistan, Iskandar Mirza served as secretary of defence from 1947 to 1954.

He was not a politician, never participated in the freedom struggle in any capacity, and neither did he play any role in the creation of Pakistan. His appointment as defence secretary was perhaps entirely based on his experience and services as an army officer and a bureaucrat in administration. Being a defence secretary at the federal level enabled him to play his part in the shenanigans of bureaucracy against the political governments of his time. After the assassination of the first prime minister of Pakistan, Liaquat Ali Khan, in 1951, a gang of four bureaucrats, gradually consolidated its power.

Two of them from Punjab -- Chaudhary Muhammad Ali and Malik Ghulam Muhammad -- had their background in civil bureaucracy. Ayub Khan from the NWFP (now KP) was the first Pakistani commander-in-chief of the army, and Iskandar Mirza from Bengal had his background in both the army and civil administration.

After LA Khan’s assassination, the gang of four persuaded governor general Khawaja Nazimuddin to become prime minister and appoint Ghulam Muhammad as governor general (GG). Some historians believe that it was Nazimuddin’s personal decision to opt for premiership and appoint a semi-paralysed Ghulam Muhammad as GG, hoping that an ill GG won’t create many problems for the PM.

Anyhow, Iskandar Mirza’s star shone brightly when Ghulam Muhammad appointed Mirza as governor of East Bengal in May 1954. In East Bengal, a popular Bengali leader, Maulvi AK Fazlul Haq had won the provincial elections by defeating the Muslim League. The United Front (Jugtu Front) formed the government and Fazlul Haq became the first non-Muslim League chief minister of the largest province of Pakistan in April 1954. Iskandar Mirza played an instrumental role in the dismissal of Fazlul Haq and the suppression of Bengali nationalist movement. By doing this Mirza improved his credentials in the eyes of Pakistani establishment and enhanced his position in the gang of four.

As the governor of East Bengal he also imposed a ban on the Communist Party of Pakistan in early July 1954. The same month the ban was extended to West Pakistan also. Iskandar Mirza’s next elevation came about in October 1954 when Ghulam Muhammad, the governor general, dissolved the first Constituent Assembly of Pakistan. In the new government that was selected rather than elected, Mirza was appointed federal home minister, in which capacity he served from October 1954 to August 1955. In the new cabinet, General Ayub Khan was appointed as the federal minister for defence.

So now we can summarise that after serving for seven years as defence secretary (1947 - 1954), within a year or so, Mirza enjoyed two highly important positions i.e. governor of East Bengal and then federal home minister.

Now comes the most crucial juncture in Mirza’s career, and for that we need to understand what was happening in 1954-55. By 1954, the first constituent assembly had outlived its tenure. The assembly members were elected in 1946 and after Pakistan came into being the assembly was responsible for drafting a constitution to replace the Government of India Act 1935, which was adopted with some amendments as an interim constitution of Pakistan called the Independence Act 1947.

Another important current of events was related to the formation of One Unit. Though the assembly at the centre had been dissolved, the provincial assemblies were forced and manipulated to pass the bill for dissolving their own provinces and forming the One Unit. The new assembly was elected by indirect vote meaning the provincial assemblies voted for the new Constituent Assembly. Since the Muslim League had lost its majority in East Bengal, in the new constituent assembly also the ML did not command a majority. The elections for the new constituent assembly were held in June 1955.

In East Bengal, parliamentary rule was restored so that the provincial assembly members could vote. Ideally, Fazlul Haq should have been restored as chief minister, but Iskandar Mirza was strongly opposed to him, so Abu Hossain Sarkar was asked to form the provincial government in East Bengal which he did as the new chief minister in June 1955. Now the United Front which had Awami League (AL) of Suhrawardy and Krishik Sramik Party (KSP) of Fazlul Haq, split as AL withdrew support to AH Sarkar of the KSP. Now there were three major political forces in the country.

The Awami League, United Front and ML emerged as the leading parties in the Second Constituent Assembly elected in June 1955. Out of a total of 80 seats, the ML got only 25, while it had had 64 members in the First Constituent Assembly. In East Bengal, only one candidate of the Muslim League won and he was prime minister of Pakistan, M A Bogra. The United Front won 16, and Awami League 14 seats for the new assembly. Technically speaking, the AL and UF could have formed a government in the centre, ousting the ML, but that didn’t happen.

HS Suhrawardy, who had been the federal minister for law and justice in the Bogra government since 1953, decided to support the Muslim League in the formation of new government and when the new constituent assembly met in July 1955, Bogra won 40 votes thanks to the Awami League and independent members. Within a month, the AL demanded the resignation of Bogra and wanted to form a government led by H S Suhrawardy. The United Front negotiated with the ML and formed a new government led by Chaudhry Muhammad Ali (CM Ali) who had been minister of finance since 1951.

August 1955 was a turning point for Iskandar Mirza and CM Ali. Up until then the health of Ghulam Muhammad was deteriorating rapidly and he was on a wheelchair, while most decisions were taken by Mirza, the home minister, CM Ali, the finance minister, and Ayub Khan, the defence minister. On August 7, Mirza became the acting GG and on August 12, 1955 he administered the oath of office for the new prime minister, CM Ali. By then, despite strong opposition, most of the ground work for the formation of One Unit had been done.

In the next six months, two important developments took place. The formation of the One Unit was completed as the new assembly passed a bill dissolving all the provinces in West Pakistan and the creation of One Unit i.e. one consolidated province of West Pakistan with its capital at Lahore. In the run up to the One Unit, all those provincial leaders who protested or opposed the One Unit, were harassed or incarcerated. The chief ministers who opposed it were dismissed or forced to resign such as Pirzada Abdus Sattar in Sindh and Sardar Abdur Rasheed in the NWFP.

The bill on the integration of West Pakistan met with strong opposition in the second Constituent Assembly. Even those who had initially supported the One Unit such as Feroz Khan Noon were now opposing it. The opponents of this idea were demanding a referendum on this issue. However, the bill was passed by the votes of the ruling coalition comprising the ML and UF. The duo of CM Ali and Iskandar Mirza managed to get it through and in October 1955, the One Unit formally came into being.

With Mushtaque Gormani as governor and Dr Khan Sahib as the first chief minister of the newly-formed province of West Pakistan, the former chief ministers who had helped pass the bill, became cabinet ministers e.g. M A Khuhro from Sindh, Sardar Bahadur Khan from the NWFP, and Hamid Dasti from Punjab. Mumtaz Daultana, Abid Hussain, and Qurban Ali also joined the new provincial government. Interestingly, when the new provincial government was formed there was no legislative assembly; it was formed in January 1956 with members chosen from the former provincial assemblies, and from Karachi and Balochistan.

Right from the formation of the One Unit, it faced stiff opposition especially from the Red Shirts, Vror Pakhtoon, Sindh Awami Mahaz, the Hari Committee, and Ostoman Gul (the party of the masses) and the Awami League of the former NWFP led by the Pir of Manki Sharif. It is interesting to note that HS Suhrawardy, as law minister in the Bogra government, had supported the One Unit scheme. The Azad Pakistan Party of Mian Iftikharuddin also opposed the One Unit.

After the formation of the One Unit, Prime Minister CM Ali also moved swiftly to formulate a consensus constitution for the country. Finally, after nine years of debates and delays the first constitution of Pakistan was promulgated in early 1956. Iskandar Mirza secured his position as the head of state and became the first president of Pakistan on March 23, 1956.

In the next part of this essay, we will discuss the events leading to the failure of this constitution and the promulgation of the first martial law in the country.

The first coup in Pakistan-I