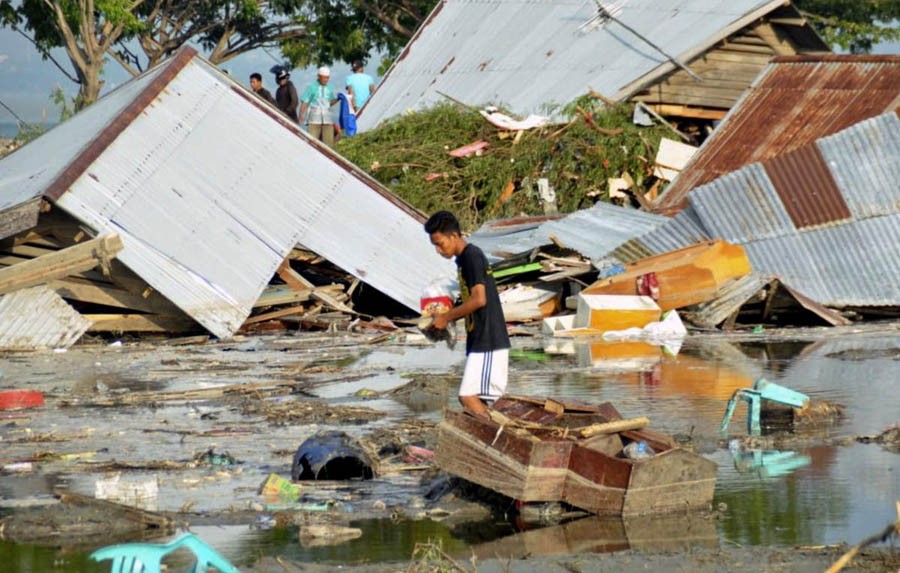 Since August this year, Indonesia has been tragically hit by tsunami and earthquakes that annihilated more than 2000 people so far. Hundreds have been seriously injured while many are reported missing.

But this is not an isolated disaster. Japan, Indonesia, Chile, India, Mexico, Iran, Italy, United States, China, Ecuador, Taiwan, Nepal, Turkey and Pakistan are some of the countries hit by earthquakes and tsunami during the past thirty years. And people of Karachi must remember that a tsunami hit the city in November 1945 that killed over 4000 people.

Our memories of the deadly October 8, 2005 earthquake that saw complete devastation of many cities, towns, villages and hamlets in Azad Kashmir and parts of Khyber Pakhtunkhwa are still fresh. More incidents followed in Ziarat and Awaran in Balochistan. People and governments responded instantly.

Immediate relief assistance to the quake-hit families, rescue and search operations, provision of essential services, enaction of shelters to accommodate the vast shelterless population and provision of essential healthcare services were some of the tasks that were undertaken with meticulous organisation and swiftness by all the concerned stakeholders.

Due credit must be given to the military agencies, their zealous personnel and workers from different countries and professional groups from all across the globe. New institutions were created to deal with rehabilitation and reconstruction works; Earthquake Rehabilitation and Reconstruction Authority (ERRA) and National Disaster Management Authority (NDMA) are two mentions. But the country is still not equipped to deal with earthquakes and tsunamis, given the peculiar geo-seismic facts.

Our major concentrations of population are still under tremendous threats of various kinds of earthquakes and tsunamis. Earthquake engineering experts, geologists and seismologists have given red signal to the southern coastal strip of the country -- terming it danger zone. Shivers run down the spine when one even attempts to think about any such disaster in the chaotic urban contexts of Karachi and its environs.

Leaving all the other urban maladies aside, each of these locations is characterised by dense inner city areas with poor accessibility. In case of fire, the approach of fire tenders is severely constrained. Tens of thousands of people inhabit each of these micro settlements. None of our cities are prepared to deal with disasters or emergencies at any scale. Many reminders have come on the way but little notice was taken. A properly structured disaster management plan cannot be delayed for our cities and districts any further.

Attempts to prepare a disaster management strategy would find many chronic problems. Most of them are deliberately created in connivance with our greedy and unscrupulous building control authorities as well as autonomous land management agencies. Permission to construct high-rise structures along major corridors, unchecked densification in inner city areas, rampant violation of building regulations, whimsical twists in land use and lease grant conditions, inappropriately laid down infrastructure, particularly gas and electricity conduits/wiring are standing hazards common in the cities and sub-urban locations of Pakistan.

Provincial disaster management authorities must begin by stock taking and analysis of buildings and structures in the various localities. The buildings must be analysed for their current usage; occupancy and utility; structural stability; safety provisions including fire escapes, exit ways and fire fighting systems; potential hazard points comprising electricity boards, gas installation and harmful storages; parking lot study and hazard assessment of micro environment in which the building is located.

Appraisal of under-construction buildings and building plans need to be done. It is a common place observation that hazardous activities have penetrated into the city neighbourhoods without much restraint. Storage of gas cylinders, chemicals, inflammables and the likes must be carefully noted and dealt with according to safety regulations.

After a careful analysis of data and facts related to the potential disasters, the building codes and infrastructural planning procedures must be reviewed. This must be done in consonance with the disaster mitigation requirements. For instance, while it is true that no building can claim to be earthquake proof, construction should be such that it must give adequate warning before collapse so that the inhabitants can safely evacuate the premises.

Upscaling of civil defence organisation is a foremost requirement. Training of volunteers capable of taking lead in the event of a disaster is an important requirement for this institution. Mass awareness and basic training at schools and colleges must be mobilised on war footings. Trained teams comprising capable and equipped rescue workers must be raised and deployed along each town. Disaster preparedness drills must be a regular feature in this reference. Every district must develop a disaster mitigation and coordination centre located at a safe site. Communication and management of such activities must be its terms of operation. A disaster management unit in the existing group of offices in local government framework may be added.

Public universities in Karachi and Peshawar have elaborate earthquake labs and testing facilities for assisting the building industry. They possess arrangements for examining micro-sized and even life size building design for different set of parameters. Due benefit must be derived from these facilities. Given the fact that our construction process is largely unregulated and informal in nature, the disaster management authorities at the provincial level must facilitate training and capacity building of artisans, labourers and contractors of various scales.

The building codes and regulations have been revised many a times. But the real benefit of these packs of professional wisdom can only come when this technical knowledge is made digestible for the everyday users. The professional and statutory bodies of engineering, architecture and planning must be kept on board to make the above initiatives effective and inclusive.