Tied to the river 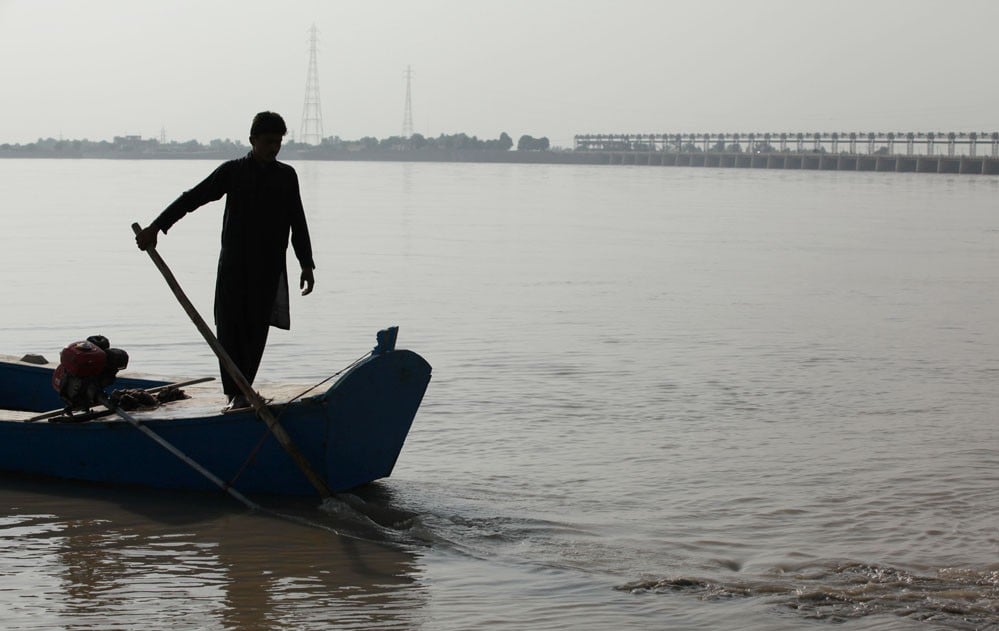 They visited Ghulam Sarwar’s house numerous times, day and night. Each time the threats escalated as they demanded that he pay back what he owed their boss. Sarwar stood firm, "I will not pay you any money, I will not fish for you anymore, I will starve and die before I fish for you again."

Sarwar’s predicament was common amongst the adivasi (indigenous) fishers around Taunsa Barrage. The rivers had suddenly been set free for them and tentatively they were learning how to navigate this freedom. Those visiting Sarwar’s house, paid employees of the contractor who previously held the lease on this public water, find themselves cast adrift by this freedom, struggling to assert their power and authority.

Just as the Supreme Court focuses the nation’s attention on building dams in response to the debate around perceived ‘water scarcity’, another court made strides in addressing the concerns of those communities who have suffered the most as a consequence of river engineering and its hegemonic understandings of water. In August, the Lahore High Court issued a temporary injunction upon the annual leasing of public waters, the rivers, lakes and ponds of Punjab, to the highest bidder.

Sarwar brings us back with a shout to his grandson to lash down the boat. The boat is the means of survival for him and six male relatives, and their families, who work the river with him. The contractor had come a couple of weeks ago and seized the boat, claiming that it was payment for the debts that he had accrued over the years. It took a visit to the MPA Ashraf Rind by a delegation of Sindhu Bachao Tarla (Plea to Save the River Indus, a grassroots network of fishers across the Punjab) to finally have the contractor’s men return the boat. They returned the boat with threats of violence if he spreads the word to other bonded labourers that his debt is somehow now in abeyance, a fear that those who were bonded to the contractor would express a freedom that destroys their monopoly and their astonishing profits.

"This has always been our home," Sarwar looks out across the river. Joined by others from the basti, they explain how, where we sit, was once part of the river, that the sweep of the river was vaster than our imagination could ever capture. They tell of the adivasi way of life tied to the river, its geography, its time, the way it breathes -- sharing how they have always fished on the river.

They describe how granting a monopoly to the contractor has led to most fishers to be drawn into bonded labour conditions, arguing that in fact the leasing system itself is formed by the sweat and blood of bonded labour. Despite their own condition of bondedness they lament that it is the Sindhi community that suffers the most -- those who have had to travel upstream in search of fishing waters as the rivers and lakes increasingly dry up in Sindh, a steady migration that matches increased intervention in river flows. "They come with nothing but their ties to the river, and find themselves enslaved the moment they stop moving," Sarwar says. It is the nature of the leasing system, he repeats.

It is under these conditions that Sarwar and other members of his community organised as Sindhu Bachao Tarla. Over a decade of struggling against the contract leasing system has brought them to challenge the practice in court. As Sarwar so eloquently puts it "when a contractor wins a lease all he is concerned about is earning money, nothing stops him in pursuit of this money. He will kill the river in this search".

He demonstrates, with a lucidity born of an eyewitness, a range of practices which have devastated the river ecosystem -- methods which contractors force those bonded to them to practice. "To be forced to kill the river with our own hands, we kill ourselves," he adds in a deathly whisper. "(We) who have nurtured the river for centuries, who understand its nature, whose lives are the river, the state has silenced us by taking away our rights to fish."

In some waters, for example around Head Muhammad, Taunsa Barrage and South along the river to towards DG Khan, the stay has meant a breaking of the monopoly of the contractors and resulting in the adivasi fisher communities to both fish and sell their catch freely -- a freedom that has not been exercised for generations.

And so it is with these claims that he, along with two other petitioners, Khadim Hussein, and Bashiran Mai, approached the High Court, lamenting how it is that a public resource, held in trust by the State, could be the site of such brutal conditions of slavery.

It is late September with the summer heat at its last ebb. The Sindh Sagar Sath (People’s Tribunal) has been organised by Sindhu Bachao Tarla, besides the river Indus in the shadow of Taunsa Barrage. The Sath is an inventive praxis, drawn from vernacular traditions of truth-telling common in the Siraiki wasaib -- it acts as a form of witnessing, authorship, control, judgment, or quite simply, a process of law-doing. Participants come from across the Punjab to explore a range of issues related to the fishers. The focus though is on the legal challenge that has been mounted against the contract system -- from explanations of the process, and the petition filed, to an exploration as to what the stay order means for fishing and the status of their debts. A complexed picture emerges.

In some waters, for example around Head Muhammad, Taunsa Barrage and South along the river to towards DG Khan, the stay has meant a breaking of the monopoly of the contractors and resulting in the adivasi fisher communities to both fish and sell their catch freely -- a freedom that has not been exercised for generations. The result has been that the local communities along and close to the rivers and lakes have, for the first time, the ability to add fish to their diets. Ordinarily the fish would be taken by the contractors for faraway markets that are far more lucrative.

In other waters, such as Chashma Barrage, Layyah, Bhakkar, Alipur, the stay has re-arranged the balance of power and contractors to whom the bonded labour ‘owe’ money share the fishing yield more equitably (on Chashma Barrage previously the equivalent of 900 rupees per mann of fish caught was shared, now the fishers take half the catch).

The role of the Fisheries Department also varies along the river. In some areas there is collusion with the contractors creating illusions of the continuation of the contract regime, in others in recognition of the hardships that the fishers have historically suffered local officials have entrusted the fishers to fish freely. In still other waters (Rajanpur, Taunsa, DG Khan Canal) numerous reports appear to show that the Fisheries Department has leased out waters despite the illegality of the auctioning process, this patina of legality sometimes effective, often not. Quite simply, wherever you go the waters are abuzz with whispers of freedom.

Yet there is a fear that comes from years of bondedness, lingering over the proceedings of the Sath. What happens to their debt, often as an unknown amount, paid off many times over, yet carrying a weight on their shoulders? If they do not work for the contractor what happens to this debt? Despite clarity that the debt is illegal and that it dies with the end of the leasing system the temporary nature of the courts intervention leaves the shadow hanging.

This contradictory tone of fear and freedom shifts again with a number of assertions at the Sath: that the adivasi fishers would fish just for their subsistence and for the local communities along the river. The tale that ‘they’ would fish to excess that market capitalism tells time and time again, in its imaginary tragedy of the commons, was laid to rest in this affirmation. Acutely aware that this approach to the law can just easily take away what it has thus far granted, the common refrain asks if their condition, they refer to themselves as both river and fishers interchangeably, could ever be worse than what has already been lived. Talk of imagined fisher co-operatives replaces any fear.

It is October now and Sarwar tells me that the river has had the chance to breathe, that this stay order has allowed the river to start repairing itself from years of overfishing.

Many years ago a similar Sath was held in which the adivasi fishers had decided to assert their right to fish freely. Then the contractors and the state wielded the threat of a violent assertion of legal right and so the fishers caught fish only to release it back into the river, disarming the State functionaries and symbolic of their non-violent approach to struggle. This year, the Sath culminated in a yatra and a manooti, a pilgrimage and a pledge, to the river, and then they fished.

Tied to the river