A woman’s bargain with the city

The dark hours are those that are perceived objectively as a time where the populace of the city goes out to de-stress itself, but women alone can only be caught up in unwanted situations 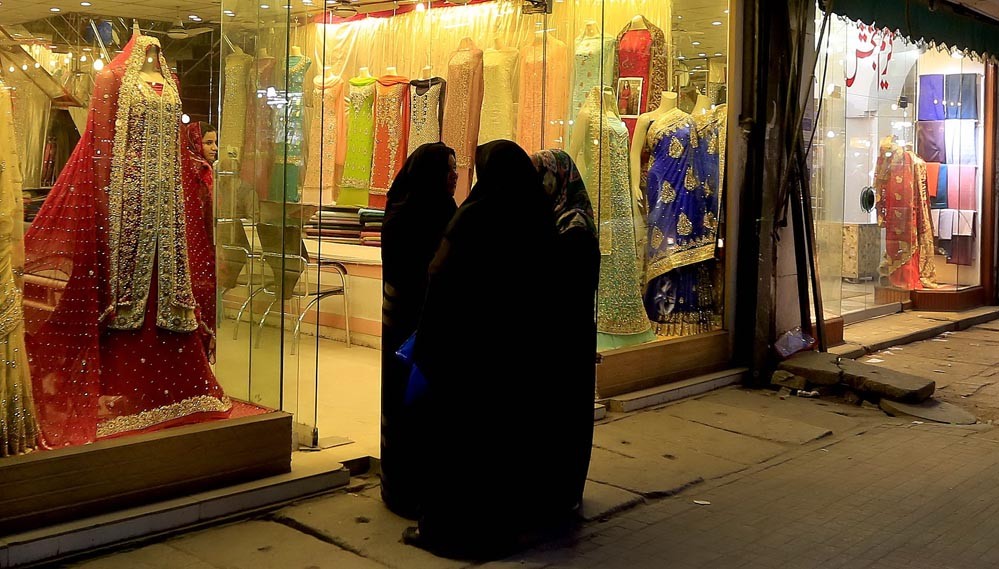 Whenever one hears about Lahore, it’s always talked about in relevance to the historical sites that reside in it, the numerous food places, from the infamous food street to posh places towards the new city, its colorful ambiances and its famous Liberty Market.

Its roads are always bustling with people, and the famous line "the city that never sleeps" rings true. But through this holistic account one often forgets to see the subjective experience of Lahore. Is it so easy to access the city in all its glory? Is the experience really so objective? Is it really a space that welcomes you with open arms? We are forced to ask ourselves at the end of the day -- is Lahore the same for everyone?

A woman in the city is often immersed in the perpetual dilemma of what to wear and what bargains to make every day she steps out into the city. Everyday a woman who goes to her college in a local bus, prepares herself to occupy what the objective narrative calls merely the busy streets of Lahore. She wakes up to the question of what she would wear, or perhaps more accurately what could she wear that is conceived appropriate, how she would talk to the bus conductor, and how then would she carry herself with an air of utter aloofness as she makes the trip from her house into the city.

Her bargain with the city is very simple: she will occupy it, and pay the price of endurance by ignoring all aspects of the city that make her uncomfortable such as the men cat-calling her. Perhaps, more accurately, she occupies the silent, unnoticed spaces within the city.

Fatima, 17, has been making use of public transport for a couple years to pursue her education. The journey to the other end of the city from her home takes over an hour. She remembers getting ready in the morning to leave for college, when her father saw her outfit and told her to change into something more conservative because the "bus conductor is a man and you should not dress this way around men when going out in public."

Her father’s words have forced her to internalise the need to cover up as much as possible before she boards the bus to her educational institution. It is a constant reminder that these spaces are not hers to occupy.

The Liberty Market, or the famous Anarkali bazaar are innocently perceived as simple shopping markets where you will find all the necessary traditional clothes and accessories. But this account fails to capture the common experiences of a woman who actually feels so unsafe, ironically, in a market which is supposedly only for women.

Street harassment is often a part of her experience of what Liberty Market is. From the time she enters until the moment she leaves, she is most likely to face harassment of all kinds -- the shopkeeper’s persistent behaviour, being ogled by every passing man, and being groped by strangers. The experience is one filled with extreme fear and anxiety, where she is constantly fearful of any passing strangers.

It is in those small actions through which we really understand what the city means to her; draping her long black shawl around her to ensure it covers her, the niqab around her covering her face, fixing her kameez all the time, and constantly worrying that unwanted strangers would bump into the realm of her psychical and psychological sanctuary.

Shanzeh, 21, has been going to these markets for as long as she can remember. She seldom visits the market alone; it’s always with someone else, to avoid being harassed. On one occasion, she remembers telling her mother that she had a quick errand to run at the market but was told by her mother to "take your brother along." Since then she has always felt the need to take a male member of her family along to ‘protect’ her.

Young girls internalise that these public spaces are not theirs to be in, from a young age because of our society’s socialisation process.

Essential to her experience of the city are the number of hours she can operate within. The city that never sleeps is primarily a very masculine account for her, for she cannot occupy the spaces of the city within the odd hours of night on her own. The Maghrib time is her cultural and social curfew, silently understood by her, and loudly told to her by others.

How bright the sun shines and the brightness of the daylight is what describes her relationship with the city. The dark hours are those that are perceived objectively as a time where the populace of the city goes out to de-stress itself, but women alone can only be caught up in unwanted situations.

Sara, 22, is used to the constant reminders like "Be back home before sundown" from various members of her family. Even if she wanted to take control of the spaces that she deems are hers to be in, the city remains unreachable because of the norms we install as a society.

Lahore has a long way to go and it is evident that even for those who have lived their entire lives within its blurred boundaries, the experience of the city is not consistent. It is truly a shame that such a marvelous city filled with culture, communities, food, music, theatre and so much more still cannot provide an inclusive experience to all its inhabitants. Women and their relationship with spaces is something erased from accounts of the city.

A woman’s bargain with the city