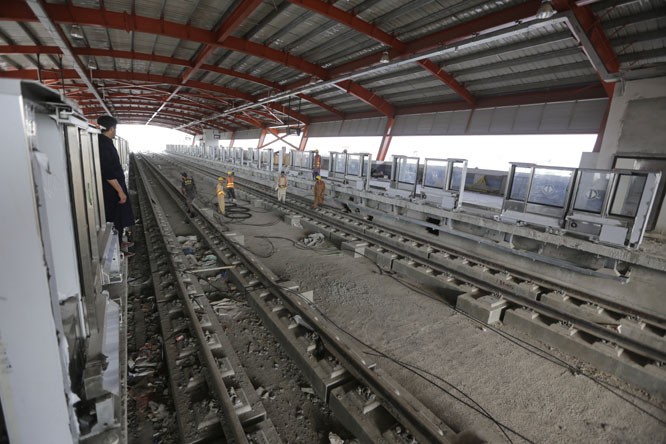 Metropolitan cities drive the economy of a country and public transport facilities act as the ‘lifeline’ for urban culture and development. The Lahorities have long been waiting to avail the Orange Line Metro Train, work on which is said to be 91.07 per cent complete.

Recently, the mega project -- started on war footing by the previous Punjab government -- was stayed by a court order. But, after getting clearance from the Supreme Court of Pakistan, NESPAK, the project consultant, started to revise the project cost.

Chief Engineer, Lahore Development Authority (LDA), Mazhar Khan tells TNS that all formal approvals have been sought now, and the LDA should resume work on the train very soon.

The project is being completed as two "packages": the first involves the train track starting from Dera Gujjran on GT Road and ending at Chauburji; the second has the track from Chauburji up to Ali Town on Raiwind Road. Technically speaking, the train covers almost 95 per cent of the city in a circle.

Figures further reveal that 46 out of 48 elevators at package 1 have been installed, while in the package 2, LDA has installed 51 out of 52 elevators. The installation of platform screen doors is also complete at most stations.

Chief Engineer LDA Mazhar Hussain says the need for mass transit project in Lahore was identified in 1990, and studies were carried out at that time. Despite various attempts, no project could take off. "A feasibility study of a Rapid Mass Transit System (RMTS) for Lahore was prepared in 2005-06. It covered the development of a Long-Term RMTS network for Lahore. Also, the feasibility of the priority Green Line was prepared, based on identification of potential mass transit corridors, followed by a broad assessment of patronage and engineering constraints in those corridors.

According to Hussain, the Orange Line will provide important links between areas slated for new development in the south and the major employment and education centres, concentrated in the city.

He says the maximum saving is on Multan Road where a reduction of 337 buses (two-way) can be achieved. Much of the saving can be attributed to the reduction of long distance through buses, a move which also helps to provide relief for the congested city centre area.

He also speaks of another benefit of the project: "it promotes clean and green environment through low greenhouse gas emission (e.g. chlorofluorocarbons)."

Studies show that in Delhi, India, reduction in carbon dioxide emissions up to 145227.5 ton per annum pro rata was recorded after completion of its metro bus project. The CE LDA says that the project also has social benefits such as reduction in congestion on the side roads, cleaner air, and reduction in accidents.