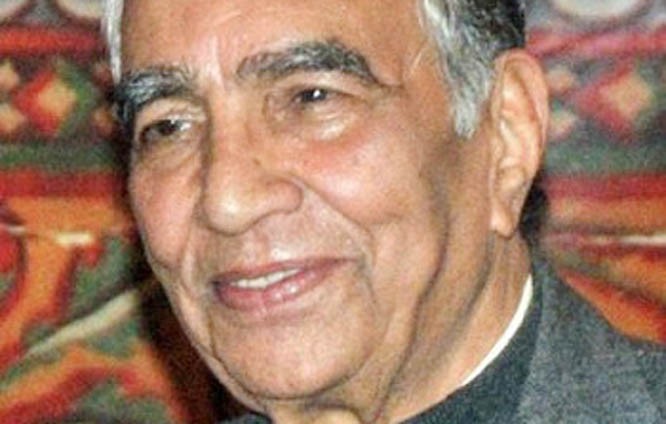 Pran Nevile, the acclaimed Indian author, was comfortably seated in the green room of Alhamra Arts Council, Lahore. He had been invited as a speaker at the Lahore Literary Festival 2014, and had promised to meet me two hours ahead of his session on Amrita Sher-Gil.

As I entered the lounge, accompanied by renowned painter Ajaz Anwar, the then 92-year-old Nevile stood up to greet us both with a generous smile on his bright face. He said jokingly: "Yeh munni karegi mera interview?" (This little girl will interview me?)" I responded that I was not little but the tall Munni Sohi from Rajinder Singh Bedi’s short story, ‘Lambi Ladki’. Though he laughed, he remained unconvinced that I was not a little girl.

Throughout our conversation, he continued to address me as Munni that I took as a loving expression from a gentle, grandfatherly figure. Dressed in a smoky grey coat and pants, with silver grey hair neatly combed towards the right of his broad forehead, he spoke with enormous energy. His wistful eyes appeared to carry nostalgia for his beloved city, Lahore. But he turned out to be an utter rationalist when he said, "Let bygones be bygones. We are done with Partition, and we must move ahead now. Many stories have been written about the partition of India, graphically depicting the tragedy but what’s the point? It’s useless to relive through those violent days." (Nevile left Lahore two years before partition but he frequently visited the city between 1945-46.)

Though he was hesitant, I insisted that he should narrate his experience of partition. "My father always wanted to stay back in Lahore but when riots broke out and Hindus began fleeing the city, one of my father’s friends told him, ‘Panditjee, it’s time to take off your turban and head to the other side.’ My mother and father took the last train to Amritsar amidst horrific bloodshed."

Nevile got his postgraduate degree from the famed Government College, Lahore. H.B. Dunicliff was the principal then. "It was in Lahore that I was born, raised, spent my childhood, and became a young man."

Did he find his first love in Lahore too, I asked. He replied that girls and boys would not commonly intermingle in those days "but I learnt that one should love one’s own self before falling in love with another person." He talked about the Muslim girls of Lahore, saying that 99 per cent of them wore burqa in those days. "I have noticed the trend is coming back." According to him, the Muslim girls didn’t like wearing burqa but would give in to family pressure: "As soon as my sister’s Muslim friends stepped into Hindu bazaars, they would take their burqas off."

His excitement was visible as he narrated tales of his regular visits to the Heera Mandi of Lahore. Tamancha Jan, the singing siren of 1940s, mentioned in his book Lahore - A Sentimental Journey, had her kotha there. Nevile saw her for the first time at a marriage reception of his friend’s brother at his mansion on the Racecourse Road. After graduating from the Punjab University, he and his friends considered themselves ‘mature’ enough to visit Heera Mandi for the ghazals, thumris and dadras. "I still remember how nervously I requested Tamancha Jan to sing ‘diwana banana hai to diwana bana de’."

"I disagree with those who say the true essence of Lahore has faded over the years. I believe that change is inevitable and an integral part of life, which must be appreciated," he said, recollecting the fragments of his life, adding that he had lived in a number of cities but the magnetism of Lahore was unmatched.

His fascination for performing arts later inspired him to produce an illustrated masterpiece, titled Nautch Girls of India, depicting their allure that had held spellbound the English settlers for nearly two centuries. Nevile chose to address them as performing artistes who have been degradingly called ganikas, devdasis, kanchanis and tawaifs across history. He also mentioned visiting the kotha of Inayat Bai, saying, "Ustad Bade Ghulam Ali Khan was fond of her, too".

He regretted the fact that exotic melodies by such forgotten singers had not been archived, calling it a "huge loss".

He relived many a moment from yore. His voice did not crack, his eyes didn’t moisten, though he spoke with pain: "I returned to Lahore after 51 years. I didn’t want to disturb the images and the memories that were stored in my mind before completing my book [on Lahore]. So, after it got published, I came back to the city of my birth."

His friend Khalid Hasan used to call him "Chalta phirta Lahore", just like people call Manto, "Chalta phirta Bombay". "All those years that I was away from Lahore, not a single day passed when I would not yearn to return to my city," Nevile recalled.

"It was unfashionable to talk about religion in those times," he said, ruminating about the Sitla Mandir that once stood between the Shah Alami and Lohari Gates and was believed to be the ancient temple attended by Hindus and non-Hindus alike before the partition. The Mandir as well as the Hanuman Temple don’t exist now.

"I disagree with those who say the true essence of Lahore has faded over the years. I believe that change is inevitable and an integral part of life, which must be appreciated," he said, recollecting the fragments of his life, adding that he had lived in a number of cities but the magnetism of Lahore was unmatched: "Lahore for me is a city that defies description and must only be felt and experienced."

Nevile had to rush to Hall 2 to speak on Sher-Gil, so we wound up our conversation. I asked him if his pragmatism and rationality were the secret of his good health. He laughed and said, "Yes, and add to that staying happy, eating well and drinking alcohol".

Before he left, he scribbled his email address on my notebook, asking me to share the copy of the published interview with him, so that he knows "the munni can actually write". I promised I would. As days passed in procrastination, the interview became a part of my pile of unpublished writings. Now that he’s left us, Nevile would never be able to know that Munni could write.