Knocking on the IMF door? 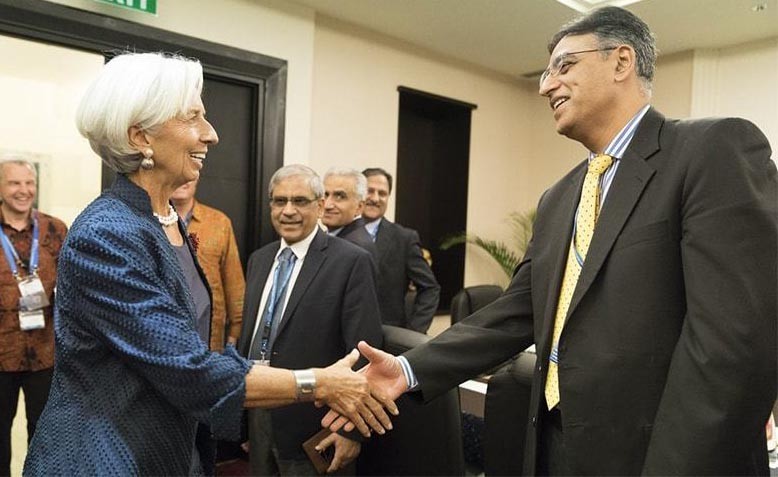 It has become a tradition of sorts that whenever Pakistan’s economy falters it looks for an immediate fix rather than taking hard long-term decisions.  Each time Pakistan can’t afford its overwhelming expenditures, its heavy imports exceed its diminishing exports over a substantial period of time, and when it can’t pay back even interests on its piled up past loans, its governments borrow more money from domestic and foreign entities or countries.

So, as we have seen before, Pakistan runs through its very tiny list of ‘friends’, begging for a quick monetary support. These countries usually notice that Pakistan’s bills are exceedingly accumulating, and if the cost to contribute funds outruns their own vested agendas they either refuse altogether or offer very little in exchange. Pakistan, then, ends up knocking the IMF door.

Thus, begins the affair of moaning, loaning and all that jazz.

The PTI government’s finance minister has met with the IMF delegation to request financial assistance. As the process goes, once the letter of intent is submitted, the Fund’s Executive Board reviews the petition and recommends the loan with preconditions already agreed upon and familiar to both sides.

Contrary to the misplaced popular belief that the IMF dictates domestic policies, the Fund just identifies budgetary issues, offers assistance, and suggests structural reforms so that a member country seeking support could break the cycle and turn its economy around.

As in the past, this time too, Pakistan is suffering from imbalances in its fiscal and current accounts. It also has low reserves and a currency that was too rigid and overvalued, resulting in further financing gaps. The government had, on its own, started taking measures that were required to catch up with the ever-evolving global economic conditions. These steps were followed by the announcement that the government had to reach out to the IMF, which kicked up a huge brouhaha at home that the Fund had started directing unfriendly terms including a price-hike in utility bills, or a reversal of the 18th amendment.

The IMF, however, is dealing with the matter on technical grounds. Instead of micro-level discrepancies, it is advising macroeconomic corrections, most importantly, structural reforms to maintain a reasonable balance of payments. "Our job at the Fund -- through surveillance, through our capacity development -- is to help our members try to attain their potential," said Maurice Obstfeld, the Fund’s Economic Counsellor and Director of the Research Department, at the release of the 2018 World Economic Outlook.

Surveillance here simply means that when a country joins the IMF, it agrees to subject its economic and financial policies to the scrutiny of the international community. It also makes a commitment to pursue policies that are conducive to orderly economic growth and reasonable price stability, to avoid manipulating exchange rates for unfair competitive advantage, and to provide the IMF with data about its economy.

The Fund has announced that a team will visit Pakistan for a round of comprehensive consultations to access economic and financial developments. The discussions might predominantly cover a range of economic policies, including exchange rates; monetary and fiscal policies; assessment of risks and vulnerabilities, institutional and structural issues.

Another serious factor that would play its part in the decision-making is the CPEC -- a Chinese loan-based project for which Pakistan imports equipment and services. Experts believe the terms on much of Chinese lending are sketchy, resultantly unbearable for Pakistan to afford its interest rates.

Coincidently, another team that recently concluded its trip to Islamabad also mentioned that the fast rise in international oil prices, normalisation of US monetary policy, and tightening financial conditions for emerging markets as additional factors to Pakistan’s economic difficulties, indicating that the country’s economic growth could slow down while inflation rises. Around the same time, the World Bank in its report ‘Pakistan Development Update’ also warned that with diminished reserves and elevated debt ratios, Pakistan’s ability to withstand external shocks has weakened significantly.

The report underscored that policy adjustments were needed to correct macroeconomic imbalances which were likely to decelerate GDP growth.

Given the scenario, the government had to raise prices, increase taxes and adjust the currency value accordingly, with or without IMF’s advice anyway. But, it’s just passive and uncreative of the government to overburden consumers that are already in the tax net, instead of broadening the tax base and bringing in sectors that somehow manage to avail subsidies or avoid taxes.

Both the financial institutions are of the view that these recent measures taken by the PTI government could be steps in the right direction, yet not sufficient. Pakistan must also "implement a reform agenda" to avoid international borrowing every five years, they have been arguing for quite some time.

Now that a substantial external financing is needed once again, the proposed benchmarks would include mid-term to long-term changes. "Priority areas include modernizing the tax system and public financial management, strengthening fiscal federalism arrangements, improve governance and eliminating losses of public enterprises, enhancing the SBP’s autonomy, intensifying AML/CFT efforts, improving the business climate and anti-corruption efforts, and fostering the economic inclusion of the poor, youth, and women," the IMF team suggested in its last report.

The Fund has had 21 programmes with Pakistan since the late 1950s. Every time, Pakistan reversed its own successes. The last three-year IMF-sponsored Extended Fund Facility Program, that was completed in September 2016, strengthened Pakistan’s macroeconomic resilience. Yet, following the completion of the programme, policy implementation weakened, thus bringing all the economic ills back. During all this period, it was the decision of the ruling authorities whether to implement the agreed-upon reform agenda or not.

The inefficiencies of government functionaries did not let the repeated reform requests materialise, which brought Pakistan back into the borrowing cycle.

Meanwhile, given the Trump administration’s strong posturing on Pakistan, the US has withdrawn its favour to convince the IMF in providing aid to Pakistan on relaxed terms. The country will be treated like any other this time. "This issue of debt transparency and an appropriate understanding of debt is not only going to apply to Pakistan. It has to apply to all countries. It is part of a necessary disclosure exercise that we have to agree with our members for the purpose of a debt sustainability analysis, but also for the purpose of the governance and corruption project that has been approved by the Board of the IMF, and for which we are now moving into the implementation period," the Fund’s Managing Director Christine Lagarde said during a press brief.

Another serious factor that would play its part in the decision-making is the China-Pakistan Economic Corridor -- a Chinese loan-based string of projects for which Pakistan imports equipment and services, ultimately adding more debt and debt service to its current accounts.

Experts believe the terms and conditions on much of Chinese lending are sketchy, resultantly unbearable for Pakistan to afford these loans and interest rates on them. "I think part of the reason that Pakistan found itself in this [economic] situation is Chinese debt and the fact that there is debt that governments have incurred that they may have thought wouldn’t be so tough to bail themselves out of but has become increasingly tough," the State Department Spokesperson Heather Nauert reiterated earlier this month.

The State Department also reminded that "we examine [the assistance program request] closely from all angles of it, including Pakistan’s debt position, in evaluating any type of loan program." Earlier, Secretary Mike Pompeo had stressed that any potential IMF bailout for Pakistan should not provide funds to pay off Chinese lenders. "Make no mistake. We will be watching what the IMF does," he had warned, "There’s no rationale for IMF tax dollars, and associated with that, American dollars that are part of the IMF funding, to bail out Chinese bondholders or China itself."

The IMF has also emphasised that it needs "to have a complete understanding and absolute transparency about the nature, size, and terms of the debt that is bearing on a particular country. And to really understand the extent and composition of that debt, both in terms of the sovereign, in terms of state-owned enterprises and the likes of it, so that we can actually really appreciate and determine the debt sustainability of that country, if and when we consider a program."

Pakistan is likely to ask the IMF for a whopping 9 to 15 billion dollars worth of loans, according to some experts. Depending on the performance criteria, the Fund might extend loans in portions, but it all depends on how much Pakistan is open to scrutiny and how determined it is to implement and maintain macro-level structural reforms.

Knocking on the IMF door?