Partaking of the grand cultural experience of ‘Daastaangoi’ 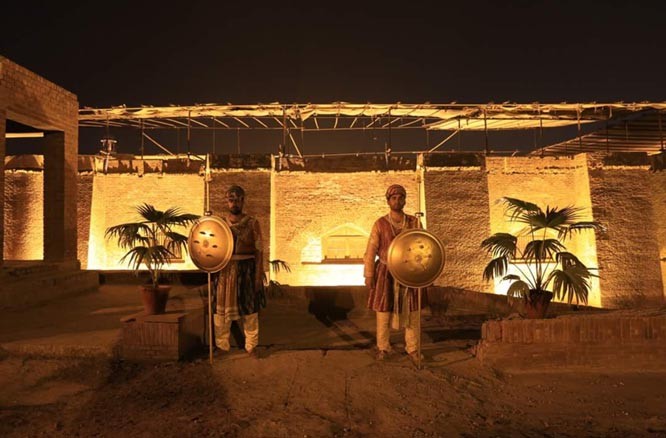 The dust-laden chaos of streets in and around the Lahore Fort form a major part of the memories of Lahoris who grew up here in the 1980s and before. The fort, like most colonial-era monuments of the city was a dead behemoth, occasionally dusted and scrubbed, but mostly a relic in mournful ruin. Brittle lawns and litter above, political dissenters in dungeons below.

For someone who remembers those days of ruination vividly, today’s Lahore Fort presents the picture of a remarkable renaissance. Painter Iqbal Husain’s Cocoo’s Den kickstarted the curiosity of Lahore’s Gulberg and Model Town elite in this side of the city, but despite a regeneration of interest, the streets still had no lights and the area remained seedy and neglected.

Around 2005, with the internet becoming more commonly accessible in the country, food and restaurant lists propelled Cocoo’s into greater prominence, as well as the area around it, and the Punjab government started taking some serious interest in it. Today, the Fort Road Food Street is a well-curated space with dozens of restaurants offering a wide variety of local cuisine. Many of these also afford spectacular views of the Badshahi Mosque, though the fort is largely cordoned off from view by its thick, high walls. I have always preferred the Badshahi’s grand but intricate beauty to the fort’s lumpish pomp. It has never moved me quite the way Badshahi always has. Last week, that changed.

Upon the prompting of a few friends I bought a ticket to the opening of Royal Kitchen inside Lahore Fort. There is something in that last sentence that should immediately strike you, if you are a middle class Lahori who has spent most of their life in this city. I bought a ticket to a major cultural event in the city, organised by the Punjab Government. I did not beg, borrow or steal a ‘pass’ from someone higher up in the bureaucracy or arm-twist someone into getting me into the affair by impressing the importance of my press pass upon them. I just simply drove to a small office near Lawrence Gardens, presented two thousand rupees at the front desk and was handed a printed ticket.

This was a liberating experience: partaking of a grand cultural experience in the city that did not require me to have an exclusive club membership or a connection with ‘higher ups’.

On the day of, I faced the same old difficulty that has plagued this area for decades: traffic so chaotic it sucks the joy out of a touristy excursion. Despite new bridges, better roads and considerable infrastructural development, the traffic conditions have remained as nightmarish as ever and figuring out where and how to get to the right gate of the fort for entry remains a challenge. As always I ended up at the wrong gate, the small one near the food street that remains permanently closed, even to those on foot, a move whose rationale I’m unsure about. This time around, unlike my previous unsuccessful attempts at other occasions, I was able to appeal to the guard’s better nature who allowed me in.

One step over the dehleez and I was transported to another time by the undiluted stillness of late dusk and the pleasant October breeze inside Huzoori Bagh; not a soul in sight as I walked towards the fort’s entrance in the distance, flanked by light columns projected on the Badshahi’s minarets, Iqbal’s mausoleum, the lush grounds and the fort’s thick walls -- the very picture of idyllic repose. In that moment I learnt why those kings killed and plotted for throne and power.

Personnel from the Walled City of Lahore Authority (WCLA), the government organisation responsible for this transformation welcomed me at the entrance, hospitably hiding their surprise at my showing up from the wrong side by quickly dispatching a guide dressed in a crisp white shalwar qameez and embroidered waistcoat to walk me to the event area. He introduced himself as Laal Shah, welcomed me to the fort, and regaled me with stories about its construction and history.

The inaugural of Royal Kitchen was marked by a Dastaangoi event, a tradition of storytelling revived in the 21st Century by Indian writers Mahmood Farooqui and Danish Hussain, and taken forward in Pakistan by Badar Khan, a theatre actor and script writer from Lahore. This particular event was an original production by Badar called ‘Daastaan Shehr Lahore Ki’. Badar is talented, though not as much as his ustaads, and going by some of the reactions I overheard from a decidedly Lahori crowd, markedly Punjabi; particularly for one reciting something that can only work in highbrow Urdu. His accent acquired a more formal Urdu tinge, though, once he started the actual daastaan.

A ride largely through Mughal-era Lahore and centred mainly on the fort and its surroundings, the synergy between place and subject matter lifted the storytelling. Small tidbits about the city and its great inhabitants and a multicultural past lit up the Royal Kitchen, but a sprinkling of bigotry and bad history marred the experience somewhat. It is regrettable that scripts aren’t vetted for accuracy or sensitivity before they are brought on to a big stage like this.

Badar repeatedly talked about a Mercedes Benz gifted by Hitler to Allama Mashriqi, and the casual mentions of the German leader like any other ‘great man’ from history jarred on sensitive ears attuned to historical excesses, especially knowing how in the subcontinent Hitler is often celebrated as a formidable leader rather than reviled as a mass murderer. Apart from that there was an interesting slant in the favour of the Sikhs whom Badar referred to as brothers, but a strong bias against Hindus in the stories told about Chandumal and Sikh Guru Arjun Dev or Data Ganj Bakhsh and a Hindu magician. Muslims, of course, were completely absolved of all historical wrongdoing. These clear biases reminded one of history textbooks instead of a rich and multidimensional tapestry that such an endeavour should evoke.

Nonetheless, it was a start that I hope others, or even Badar Khan himself, will improve and hone as he goes further down this path of original storytelling. His efforts are laudable and deserve further patronage that people like Kamran Lashari and his team are doing a fine job at.