The stage is set for UMA-CNS Open Asian Tour Championship. TNS takes a look at the International players featuring in the coming week’s much-anticipated event 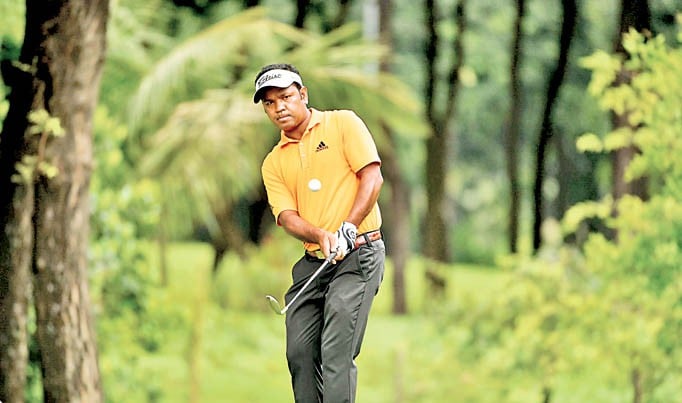 Dozens of fans cheered as Pakistan No. 1 Shabbir Iqbal birdied the last hole to win the Rs5 million UMA-CNS Open with enviable ease at the Karachi Golf Club last Sunday. But the championship was just like a dry run for what will be Pakistan’s biggest golfing event in more than a decade. I’m talking about the US$300,000 Asian Tour event which will be staged at the prestigious KGC from October 11-14.

What Shabbir won last Sunday was just the national leg of UMA-CNS Open which this month becomes part of the prestigious Asian Tour. Pakistan last hosted an Asian Tour event back in 2007. Over the years, several plans were made for its resumption but without much success. However, this year Pakistan Navy, KGC and sponsors like the United Marine Agencies (UMA) joined hands to finally make it happen.

Dozens of international players will be featuring in the UMA CNS Open Asian Tour Championship from all over the world. There are players from Austria, Australia, England, Bangladesh, India, South Africa, Thailand, Malaysia, Singapore, Sweden, Korea, Indonesia, Spain, Venezuela and the United States of America.

In terms of international participation it would by far be one of the biggest sporting events in Pakistan in recent times. For the last ten years or so, Pakistan has been, more or less, a no-go zone for international athletes. But I’m sure that successful hosting of events like the forthcoming UMA-CNS Open would help in changing the perception about Pakistan.

But hosting sporting events of such scale aren’t easy. For the last several weeks, the event’s organisers have been frantically making arrangements to ensure that the championship is a big success. Last week, they overcame some major hurdles when many of the foreign players in the entry list received their visas. Those players included several from India including seasoned ones like Amandeep Johl and Digvijay Singh. In fact India provides one of the largest share of international players as there are nine players from the country taking part in the UMA-CNS Open. That’s a welcome development considering that efforts are on to normalise sporting relations between India and Pakistan.

Speaking of participating players, the entry list of international players include 14 invitees from six countries. The invitees include England’s Luke Joy, a 30-year-old professional from Dorset. Joy, who has won five professional titles, including two on the MENA Tour, spends his winters in Abu Dhabi where he is associated with Yas Links. Then there is another invitee from England, Adam Sagar, who is based at the Michael Campbell Golf Academy at the Villa Padierna Golf Resort near Marbella, Spain.

Then there are several invitees from Austria, South Africa, Australia and Singapore. But among the star attraction would be Digvijay Singh and Amandeep Johl as both of them have many friends in Karachi.

Singh, 46, holds 12 career wins on the Indian Tour. He enjoyed a 4th-place finish in his debut event in 2008 at the Indian Masters.

Johl who was one of India’s flag-bearers on the Asian Tour and recorded several top-10 finishes from over 300 appearances. He was crowned national champion of India in 1989.

However, the real contenders for the title are unlikely to come from amongst the invitees.

Among the leading golfers from the Asian Tour are Bangladesh’s Mohammad Siddikur Rahman, Thailand’s Tirawat Kaewsiribandit and India’s Chiragh Kumar. Even 50-year-old Mardan Mamat from Singapore would be fancying his chances.

My list from among the foreign contenders would definitely be topped by Siddikur. The 33-year-old is vastly experienced and has been doing well on the Asian Tour since joining it back in 2009.

As an amateur, Siddikur won 12 events in Asia including two in Pakistan. Most of his wins (five) came at home but he also won in India, Sri Lanka and Nepal. Siddikur turned professional in 2005 and joined the Professional Golf Tour of India the following year. He won his first professional event in India in 2008 at the PGTI Players Championship at Poona Golf Club and he picked up his second victory two months later at the Haryana Open. Siddikur won his third event in 2009 at the Bangalore Open and his fourth event in 2010 at the Bangladesh Open. He became the first Bangladeshi golfer to win an Asian Tour event at the Brunei Open in the summer of 2010. In 2016, Siddikur became the first Bangladeshi ever to qualify for the Olympic Games after finishing 56th in the final eligibility list for the Rio 2016 Games.

Siddikur is followed by Thailand’s Kaewsiribandit on the list. He secured his first ADT victory in style last year at the Betagro All Thailand Championship, battling through a back injury to close with three straight birdies and win the title by three shots. He came close to winning his first Asian Tour title at the 2017 Indonesia Open before settling for second. He claimed a top-10 finish at the Shinhan Donghae Open to finish inside top-60 on the Order of Merit and kept his Asian Tour card for 2018.

Then comes India’s Chiragh Kumar, who won a silver medal as an amateur at the 2006 Asian Games, before turning professional later that year and joining the Professional Golf Tour of India. In 2011 he won three times, was the leading money-winner on tour and was named tour player of the year. At the 2011 Hero Honda Indian Open, an Asian Tour event, Kumar was the halfway leader and went on to finish second to David Gleeson in the event.

My choice for the tournament’s dark horse would be Mardan Mamat, the legend from Singapore. Mamat would turn 51 later this month but as they say age is just a number. Mamat, who turned professional in 1994, has way too much experience to be ignored. His first Aian Tour triumph came at the 2004 Royal Challenge Indian Open. In 2006 Mamat won the OSIM Singapore Masters, which was co-sanctioned by the Asian Tour and the European Tour. This made him the first player from Singapore to win a European Tour event, and earned him a two-year exemption into the European Tour. Mamat was the first Singaporean to play in The Open Championship when he qualified in 1997. He has also won several minor professional tournaments and was a member of the winning Rest of Asia team at the 2005 Dynasty Cup.

Khalid Hussain is Editor Sports of The News