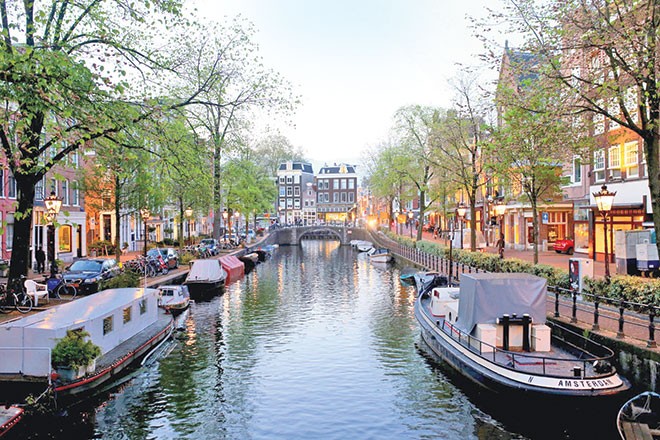 On my trip to Amsterdam, I was surprised at how picturesque the city is. Its long canals and historical houses add so much character to the city. The little cafes and restaurants, the stunning tulips and the lovely people all make this city noticeably scenic. There are cafe bars on every corner, selling coffee and pancakes in the morning and rustic sandwich creations at lunchtime. People queue up outside the museums to get a glimpse of the historic art and culture that Amsterdam is home to including the Anne Frank house, the Van Gogh museum, the Rembrandt house and the Rijksmuseum, among many others. There is thoughtful composure behind each street and an intrinsic beam of joy inside the people who live on them.

What to do when in Amsterdam

When I got back from Amsterdam, I was asked two questions over and over again: a) if I went to the red light district and b) how the weed brownies were. It is no surprise that these questions were asked by fellow millennials. But there is much more to Amsterdam than its reputation that can take away from its culture and essence.

If you’re an art connoisseur, you’ll need a greater part of the week or even more to truly enjoy all the museums and the art and cultural scene.

But for someone who wants a taste of Amsterdam without dwelling too much into any one aspect, it’s a great tip to start from the Museumplein, the area with the big IAMSTERDAM sign. That’s where my friend and I started our trip. After clicking a few pictures at the sign, we went to the Rijksmuseum.

The Rijksmuseum is the only museum in the world that was constructed entirely around one painting – The Night Watch. This painting is probably the most important painting of the Netherlands. It is not of a king, or a queen or Christ – it’s a painting of pharmacists, lawyers and merchants. The room itself proclaims Rembrandt genius, tells the story of his life and at the center is this painting. He is the Shakespeare of painting; he showcased humanity like no one could. One easily needs a day to explore the museum. Every room has gems inside but if anyone has a few hours to spend in the museum, it is advised to look at the top works at the museum and head to the Rijksmuseum library next.

It is said to have the most extensive art history library in the Netherlands. Items have been collected since 1885, including catalogues (auction, exhibition, commercial and collection), collection-related books, periodicals and annual reports. It’s basically a huge book heaven.

While the Van Gogh museum is in the same area, we decided to go there the next day to let the art sink in. We spent the rest of the day roaming around the city and its canals, letting our eyes enjoy the sights of the stunning architecture and the narrow alleys the city has to offer. We enjoyed the Dutch pancakes and the fries - which were making the rounds of Buzz feed around that time.

I also stumbled on a cute little cafe called De Drie Graefjes where we enjoyed coffee and red velvet cake, which was by far the richest velvet cake I’ve ever had. It’s also interesting that I had the best Shawarma of my life in the streets of Amsterdam. My friend and I had been walking all day and were dying of hunger. The nearest pancake place had a huge queue and we spotted a Shawarma shop so decided to go for it. Three words: Oh My God!

The next day, we explored the Van Gogh museum, which had been on my bucket list for too long. Van Gogh’s works that one gets to see at the National Gallery in London or MOMA in New York City are just a glimpse of the treasure that his museum holds in Amsterdam. The place actually tells the story of who he was as a person, his life, his inspiration and offered the biggest display of his works. You can hear the letters he wrote to his brother and actually feel like a part of their conversation and dwell in the mystery behind his life. To this day, Van Gogh’s life and art continues to inspire artists around the world.

A day at the Keukenhof Gardens

I particularly planned my trip in late spring and early summer so I could visit the Keukenhof Gardens. Keukenhof, also known as the Garden of Europe, is one of the world’s largest flower gardens, situated in Lisse, South Holland, Netherlands. It is a twenty-minute drive from the Amsterdam Schiphol Airport. According to the official website for the Keukenhof Park, approximately seven million flower bulbs are planted annually in the park, which covers an area of 32 hectares, filling the area with colors and fragrance. For Bollywood lovers, these gardens are where Amitabh Bachchan and Rekha shot the iconic ‘Dekha Ek Khwaab’ song 37 years ago.

The gardens are open from end of March to mid-May every year for eight to nine weeks. In 2019, the gardens will be open from March 21 until May 19. Getting there is not so difficult either. One can buy a [combi] ticket online or at the airport. The combi ticket has tickets to the park’s entrance and return pass of the bus that leaves the airport every 20 minutes for the park and returns to the airport too.

Accommodation in Amsterdam can be very expensive. Sometimes, even more expensive than London or New York City. Therefore, it is best to look for accommodation in advance. Renting an apartment by the canal on Airbnb is always a great option but one definitely has to splurge some extra cash for that. If you’re unable to find accommodation in the city, getting one near the airport is not a bad deal either. It’s going to be much cheaper and will take you to central Amsterdam in about twenty minutes to half an hour. Just make sure there is a bus stand next to your hotel and be prepared to spend 150 euros per night on decent accommodation in Amsterdam, especially during tourist season.

Walking around the city is the best way to explore Amsterdam because there are hidden gems and interesting photo opportunities in narrow alleys that one can’t figure out when exploring the city on a tram, metro or bus. Chances are that if you walk around the city, you will also be tempted to try gelato from a cafe you spot and it will be the best gelato your taste buds have devoured in a very long time. Europe does gelato better than any other space.

But if walking is not your cup of tea, there are buses, metros and trams to take you around. For those who can cycle, renting a bike for the day and biking around the canals is always a great way to get around the city and enjoy it in a unique way.

Regardless of how you explore the city, one thing is for sure - you’re going to enjoy every bit of it. The city will become a part of your favorite memories. I hope to find myself in this city again, because it has enough treasure(s) to keep bringing people back.