Lahore was once home to a number of statues -- of both Indian and British personalities -- erected at different locations. Of these, only one still stands; the rest have been removed and forgotten 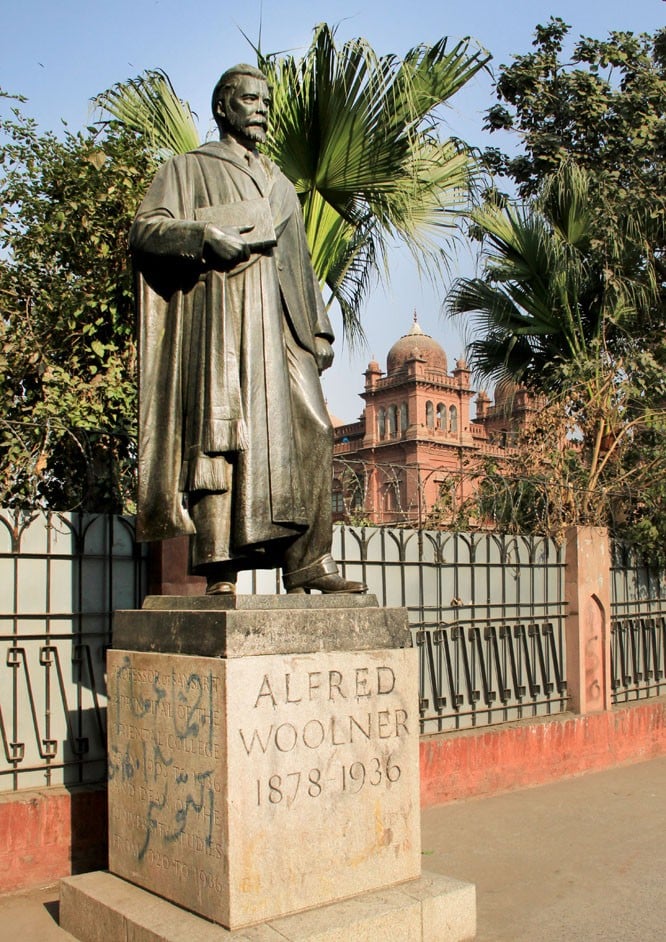 Lahore, the city of parks and colleges, as we read in books, was the city of my summer vacations and winter breaks. Witnessing its growth, from the late 1950s onwards, I realise that many memories of the Lahore I grew up in were being lost as our elders passed away.

I am reminded of a bus tour in Washington DC, during which the guide pointed out a statue of Mahatma Gandhi in the middle of a road, and the Indian Embassy nearby. A little way down, the Pakistan Embassy went by without a mention! And this, I believe, is the story of the statues in Lahore we heard about from our elders and which we lost over time.

Lahore, the favourite city of travellers, marauders, conquerors, authors, poets, and intellectuals from ancient time, has a mystic aura that keeps the Punjabi language phrase, "Lhor Lhor ae!" (Lahore is Lahore) alive. The cultural hub and the regional seat of learning, like all cities under the British, it had a number of statues and busts -- of both Indian and British personalities -- standing in different locations. Of these, only one still stands in its original location; the rest have been moved and forgotten.

Let’s revisit the statues of Lala Lajpat Rai and Sir Ganga Ram that stood in the Gol Bagh (present-day Nasir Bagh), a large ground circled by the Lahore Municipal Corporation, Mayo School of Arts (now National College of Arts) and Museum, on the one side, and Government College University and the University of Punjab on the other; the Kim’s Gun facing the Mall completing the enclosure.

Lala Lajpat Rai (1865-1928) was a prominent lawyer, politician, author, and an activist against the British rule in India. On October 30, 1928, while leading a demonstration against the Simon Commission on Constitutional Reforms in India, he was injured during the Police baton-charge. The injured Lala is reported to have said, "Every blow aimed at me is a nail in the coffin of British imperialism." He died shortly afterwards, on November 17, due to a heart attack. His bronze statue, made by Bhabesh Chander Sanyal, was erected in the Gol Bagh in 1929. As per the inscription on the pedestal, the foundation stone was laid by Mahatma Gandhi and Pandit Jawahar Lal Nehru collectively, and unveiled by Sheikh Vithal Bhai Patel on January 1, 1930.

Rai gave Lahore the Gulab Devi Chest Hospital which was opened on July 17, 1934, to treat women with tuberculosis, and named after his mother who had died of the ailment.

Rai’s statue was removed sometime in 1948, and taken to Shimla in India shortly thereafter, to be erected at Scandal Point, The Mall, in Shimla.

The statue of Sir Ganga Ram was attacked by a frenzied mob in the aftermath of the Partition Riots in 1947, and broken. Saadat Hasan Manto wrote about this incident in his book ‘Siah Hashiye’ (Black Borders): "The rampaging mob suddenly changed direction, its wrath now directed at the status of Sir Ganga Ram. Another strung together a garland of shoes. The Police arrived and started firing at the mob; the man with the garland of shoes was shot, and then sent to Sir Ganga Ram Hospital to be bandaged."

Ganga Ram died on July 10, 1927 in London. His ashes were brought to India, partly scattered in the Ganges River and the rest buried on the bank of the Ravi, Lahore. Today, his Samadhi stands in ruins on Ravi Road.

Sir John Lawrence, the First Governor of Punjab and, later, the Viceroy of British India (1864-69), stood in front of the Lahore High Court on the Mall, with a sword in one hand and a pen in the other, the inscription on the statue said: "By which will you be governed?"

In October 1921, the Lahore Municipal Committee resolved that the statue should be removed and stored temporarily in the Town Hall, and a sub-committee should deliberate on the final disposal of the statue. However, the statue remained in front of the LHC till it was moved to the Lahore Fort on August 25, 1951. In 1960, the statue was taken to the Foyle and Londonderry College, Ireland, where it stands.

King Edward VII riding a horse stood at the Neela Gumbad square near Anarkali and the blue tombed shrine of Sheikh Abdul Razzaq. Not much is known about the statue, but judging from old photographs, it stood on a pedestal that can be guessed to be over 10 feet tall. The statue was removed from the area at some point in time; it is now lying in the Sikh Gallery at the Lahore Fort.

A bust of King Edwards is in the Lahore Museum, next to the statue of Queen Victoria.

A marble statue of the Indian banker, newspaperman, and philanthropist Sardar Dyal Singh Majithia, also the founder of Dyal Singh College and Library, was kept in the corridor of the Dyal Singh College Library building. A news story in the 60s claimed that it had been stolen and sold. However, the college officials and Trust denied the allegation saying it had been moved to create space for new books. Its current location is not known.

Professor Alfred Woolner’s is the only statue that stands at its original location on The Mall, outside the University of the Punjab. It is not easy to locate in the rush of traffic, and one has to drive slow to be able to see it, the foliage of the trees covering it partially as if keeping the Professor in shade!

The Malka ka Bu’ut, as every tonga driver or Omnibus conductor would call out when passing by the Charing Cross on the Mall, signified the statue of Queen Victoria installed at the White Marble Pavilion in 1902. Made of bronze, it showed her wearing her Crown and a Veil, cradling the Scepter and holding the Orb.

Cast in London by B. Mackennal in 1900, the pavilion was designed by Bhai Ram Singh. The statue was moved from here to the Lahore Museum in 1974 before the Islamic Summit Conference could be held, and the Pavilion became the house of a bronze model of the Holy Quran.

Interestingly, the same people who held umbrage to these statues have little issues with the busts of the Muslim leaders of the Partition movement, and a number of these statues still find space in different locations in the city.

Lahore and its heritage as indeed the heritage of all peoples need to be respected and protected. While I respect the opinion of those who say that sculpturing and statues are not in line with Islamic tradition, I feel that we should reach an understanding thereby preserving these statues, artifacts, buildings, and traditions -- not as pieces to be venerated but as objects that give a glimpse to our rich past. This may be done as has happened in some Islamic countries.