Sartre and Simone in the Parisian air

A literary pilgrimage to the city of notable authors: backdrop to countless books, films and artworks 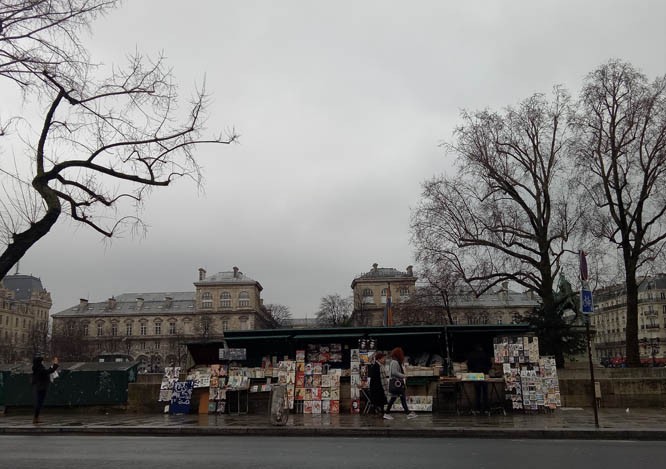 As it pours down, the poetic charm of the damp city is in full glory. People in clusters gather along roadsides under their umbrellas. And we are reminded of Audrey Hepburn’s dialogue from the Billy Wilder classic, Sabrina, where in one of the scenes, she slants the brim of Humphrey Bogart’s hat, and says, "Never carry an umbrella in Paris! There’s a law".

My Indian friend Srilekha Chakraborty is accompanying me. Our common interest in literature has brought us together in Paris for a literary pilgrimage. Over centuries, the city has been an abode of notable authors and a backdrop of countless books, films and artworks. Thus, Paris is a natural choice for us to pay homage to luminary literary icons whose works have inspired us.

We are lodged in a compact modern studio apartment in Rue Riquet on the fourth floor of a rather dreary building. The metro from Riquet Station to Franklin D. Roosevelt takes us to Champs-Elysees, the world’s most extravagant avenue. We are delighted at the thought of treading the path of our beloved philosophers Jean-Paul Sartre and Simone de Beauvoir.

We recall having read about Sartre’s obsession with crabs - that crabs chased him down Champs-Elysées in Paris. Lined with spunky horse-chestnut trees, the street is studded with overpriced luxury restaurants and cafes, no good for budget travellers hunting for proletarian prices.

We stride for more than a mile on the boulevard to the foot of historic Arc de Triomphe, and then on to Seine River. We lose ourselves in the maze of alleys and fall prey to French linguistic pride. When we ask a passer-by "Do you know English?", we invite scorn and scoff. One response is particularly witty, "Well, yeah, as much as you know French".

A narrow road leads up to Champ de Mars where our eyes catch the enchanting Eifel Tower, sparkling in golden lights. The air is heavy with the scent of roses. Romancing couples either curl up in the manicured gardens under the tower or stroll along the river, arm-in-arm. The monument woos lovers but we’re looking forward to romancing the lost Left Bank.

We go down to the Left Bank to sink into the romantic nostalgia of the 19th and 20th century Paris. In the bustling Latin Quarter, we locate the steps of Église Saint-Étienne du Mont, and I see an excited Srilekha dancing her way up the steps where Gil, the protagonist of Woody Allen’s Midnight in Paris, sat down waiting. She waits for the yellow Peugeot to transport us back to the Paris of our dreams.

Three chalkboards outside the store carry notes from George Whitman, the shop’s American-born proprietor, who called the bookshop, "a socialist utopia masquerading as a bookstore". Whitman said the bookshop was a novel written in three words. "I created this bookstore like a man would write a novel, building each room like a chapter," he said.

Their joint grave is covered in red lipstick kisses. We drop a metro ticket on the grave among several tickets already there, flowers and love notes.

Shakespeare and Company is indeed more than a bookstore. It exudes a folksy charm, a literary character often emoted in little conversations only creative minds could grasp. The shop, initially set up by Sylvia Beach in 1919, was meant to provide refuge to struggling authors and avid readers. It was shut down during the German occupation of Paris in 1941 after Beach refused to sell her last copy of Finnegan’s Wake to a Nazi officer. It was re-established by George Whitman in 1951 and soon after it became a crash pad for the city’s literati. To date, the benches inside the bookstore can be converted into small folding beds at night for walk-in readers (called tumbleweeds), in return for writing a one-page autobiography.

Inside the bookstore, we meet an old homeless man who tells us how he saves pennies to buy books of his choice. We are reminded of Hemingway’s memoir, A Moveable Feast, that features this bookshop. In one chapter, Hemingway rummages through the books of Tolstoy, Dostoevsky and D.H. Lawrence but doesn’t have money to buy them. Sylvia, the bookshop owner, waives off the deposit fee and allows him to borrow books from the library’s rental service for free. He returns the favour by taking her to horseraces, one of the writer’s lesser-known hobbies. They both sit down to talk, and Sylvia tells him James Joyce visits in the shop in the afternoons.

Shakespeare and Company was the first publisher of Joyce’s Ulysses, the novel that was rejected by other publishers for its sexually explicit content.

Towards late afternoon we join a group of local poets and authors in the library upstairs to celebrate an evening of verse accompanied with jazz. In Krista Halverson’s biography of the bookstore I had read about how Pablo Neruda would sit in the library sipping wine from old tuna cans. And that has been an old custom at the bookstore -- to serve wine in tuna tins to visitors. But, as we listen to the poetry recitals we wait for our half-full cans that never arrive!

We rummage through the windy, cobbled avenues, walking past street musicians playing gypsy jazz -- tunes that come straight from the hearts of outcasts. We hit Saint Germain-des-Pres, the trendy boulevard graced with illustrious cafés and high-end bookshops that would once be jam-packed by literary expats.

We stop by at 42 Rue Bonaparte -- the apartment where Sartre lived from 1945 to 1962 - and immediately photographs, stories and anecdotes from our collective memory come alive. We peek inside the balcony through the dusty windows to imagine the bespectacled French philosopher seated at his desk, surrounded by messy bookshelves, with a cigarette in his left and a pen in his right hand, diligently writing about Flaubert. Loose sheets of paper, lots of cigarettes and some cigars, overflowing ashtrays, a pile of books and a little lamp make up the clutter on his desk.

A short distance from Sartre’s apartment is Hotel La Louisiane, where Simone de Beauvoir lived in a top floor room, between 1943 and 1948. It was during her stay here that she had a moment of epiphany, expressed in her words as: "It was a revelation. This world was a masculine world, my childhood was nourished by myths concocted by men, and I hadn’t reacted to them in the same way I would have done if I had been a boy." This later developed into her most enduring work, The Second Sex, popularly known as the bible of feminism. We wonder if she wrote the book’s first draft with a green ink pen she was so fond of.

Philosophy’s power couple, Simone and Sartre, both fell in love yet led independent private lives, based on what they called a "transparency pact". They had their own apartments where they would dedicate their morning hours to writing, followed by a daily walk to the famed Café de Flore.

We tread in their footsteps to the trendy yet bohemian café. We are taken aback by the classic art deco interiors in red moleskin. The historic cafe is the birthplace of some exceptional literary masterpieces. The waiter dressed in his black waistcoat and a bowtie guides us to the left of the entrance thronged by regular visitors. Overwhelmed, as we sit down on the edge of our cosy seats, we catch Sartre and Simone’s reflection slithering over the windowpanes. My mind’s eye turns back to see both seated at their desks in the east corner of the café.

The café walls are witness to their existential philosophical discussions and their secondary liaisons. Sartre and Simone’s daily sojourn at the café lasted from midday till dinnertime. In afternoons they would resort to quieter rooms upstairs with their pile of notes to write incessantly.

We sit down at Sartre’s desk and glance out of the window, as Sartre would have stared into the bohemian streets of post-war Paris. He dedicatedly wrote political essays during the Second World War and his anti-colonialist stance against the French rule in Algeria earned him the title of a traitor. It’s certainly the Sartrian radical political philosophy that runs down the bloodstreams of dissenters even in India and Pakistan who fearlessly fight fascism at the cost of being labelled traitors by fellow citizens.

The pace of passers-by going up and down the lanes of the Left Bank matches the pace of our thoughts, oscillating between past and present. As we pass by Les Deux Magots café, we imagine figures of Pablo Picasso, James Joyce, Bertolt Brecht and Albert Camus lurking inside. Our literary musings take us back to the era of camaraderie between Sartre and Camus, the two intellectual stars of the city. Their first meeting at the premiere of Sartre’s play, The Flies, led to regular gatherings in private home parties and cafes of Saint Germain des Pres.

Sartre was planning the production of his new play, The Exit, and had convinced the ladies’ man, Camus, to play the lead role of Garcin. The play rehearsals would take place at De Beauvoir’s hotel room. Their friendship soon began to sour as initial rivalries began. However, their ultimate historic split came about after Camus’ publication of The Plague over ideological discord.

Lost in the thoughts of Sartre, De Beauvoir and Camus, we land up at the massive sandstone façade of the Sorbonne University campus, where Sartre and Simone had first met as students. We see streams of students and professors going about the glorious building. We engage in a little conversation with a young student who luckily knows English. "I haven’t seen enough people coming to Paris to meet Sartre and Simone," she remarks excitedly while guiding us to Montparnasse.

Lumbering a few miles around the city streets, we reach the entrance of the Montparnasse Cemetery. We imagine how Sartre and Simone stood on the tenth-floor balcony of their apartment that overlooked the cemetery. Once a journalist asked Sartre if the cemetery’s proximity to his apartment depressed him as his whole family lay there. "No, I have always loved cemeteries," was his response.

Their joint grave is covered in red lipstick kisses. We drop a metro ticket on the grave among several tickets already there, flowers and love notes. The tradition of metro tickets offers salutation to Sarte and Simone’s support to a French Maoist group that gave away free metro tickets to workers during a price hike in the 1960s. We stand there around tall heavy grass singing rhapsodies of praise to our heroes. We breathe life in moments of crying.

Sartre and Simone in the Parisian air