Peter Travers
In the picture
September 30, 2018 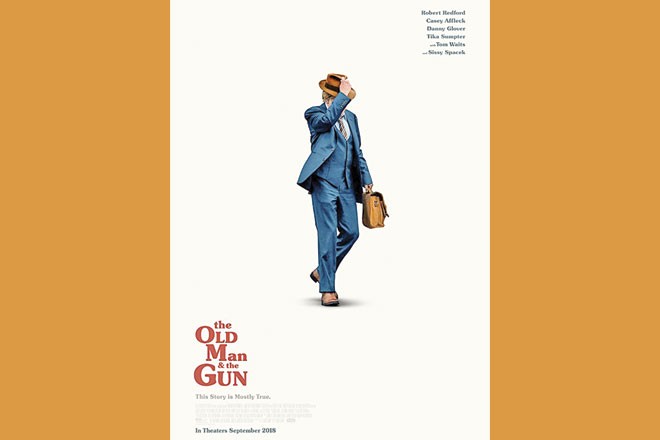 Sometimes a movie arrives that charms its way into your heart -- and The Old Man & the Gun is just such an unassuming, exuberant gift. Only afterwards do you see that its roots go deeper, that its evocation of the past points to an uncertain future. In this self-proclaimed "mostly true story," Robert Redford -- still defining movie-star magnetism at 82 -- takes on the role of Forrest Tucker, a real-life bank robber who prides himself on having escaped from prison 16 times. You might call him a "gentleman bandit," since he’s unfailingly polite to those he robs. Hell, he never even puts bullets in his gun. That wouldn’t be nice, now, would it? And deep into his AARP years, Tucker still has the itch to add to his record of 80 stickups.

The exceptional writer-director David Lowery (A Ghost Story, Ain’t Them Bodies Saints) had previously worked with Redford on the 2016 remake of Pete’s Dragon. But actor and filmmaker find a rhythm here that bubbles up into pure, irresistible pleasure. With a devilish wink, blue eyes that age cannot wither nor custom stale, and a soulful presence that comes from years of experience at his craft, the former Sundance Kid slips into the role like a comfy pair of boots. He had previously announced that this would be his swan song as an actor. Luckily, he’s since walked that back -- we’re not ready to give up watching Redford show how it’s done. Not yet. Not ever.

Basing his screenplay on David Grann’s New Yorker article about Tucker’s career in lawbreaking, Lowery never pushes for effect, shooting Old Man like one of Redford’s 1970’s films -- think The Sting or Three Days of the Condor -- that expertly balance action and character. We meet this career criminal in 1981, after his jailbreak from San Quentin, and Redford makes it clear that this outlaw loves his trade too much to ever consider retirement. He’s a breed apart from his cohorts, the other members of the so-called Over-the-Hill gang played by Danny Glover and Tom Waits; crossing the country from Texas to Missouri has taken its toll on these aged boys. They’re feeling their aches and pains. Not Tucker. He only feels the thrill of the chase. Even John Hunt (a winningly low-key Casey Affleck), the cop on Tucker’s trail, starts showing a grudging appreciation.

If you don’t fall for the elderly rascal right away, you will when he meets up with a ranch widow named Jewel. As played by the glorious Sissy Spacek, whose flirty rapport with Redford is the essence of screen chemistry, this horse trainer is the audience surrogate. She can’t believe Tucker is the man he says he is. And when Jewel does accept it, she sticks with him anyway. On paper, the connection between the bank robber and the lady may seem like Hollywood pap. But watching Redford and Spacek court, spark and connect is a beguiling acting treat. Suddenly the camera disappears and there’s nothing between them and us. They’re magic.

Some have accused The Old Man & the Gun of glamorizing criminals. (Have they every seen Bonnie and Clyde? Or The Godfather? Or The Sopranos and Breaking Bad and… ?) But finding the humanity in flawed personalities is called "characterization," and Redford and Lowery make it painfully clear how much Tucker’s unarmed bank jobs have robbed him of permanence, family and personal freedom. As he leads the cops on one last, merry chase, his defiance isn’t aimless -- it’s the whole point. What the star does, and it’s no small thing, is to show why one man nurtures his renegade spirit above all else. And whether it’s really his final bow or not, Redford gives a virtuoso performance that feels like a valedictory. You want to salute him.

Here in the States, the populace worships the Kardashians. In the U.K., there’s nothing like a Dame. In a sane world, there’s no contest. So do have tea with the Dames: Maggie Smith, Judi Dench, Eileen Atkins and Joan Plowright.

Director Roger Michell (Notting Hill) has had the good sense to round up this quartet of acting royalty and listen to each of them dish about the highs and lows of their careers, their fears, their tears, and their love lives. From acting to aging, no subject is off limits.

How do I love this movie? Let me count the ways. The setting is the garden of a rural cottage that Plowright built with her late husband, Lord Laurence Olivier, the legendary actor.

Mags, as her friends call Dame Maggie, allows that working with the demanding Olivier -- they were both Oscar nominated for 1965’s Othello -- was "tricky." Playing Shakespeare is discussed. Jude, as the diminutive Dame Judi is tagged, recalls being openly mocked as a "menopausal dwarf" when she took on the role of the Egyptian Queen Cleopatra, opposite Anthony Hopkins, in the Bard’s Antony and Cleopatra. To the sound of laughter, Dame Joan -- who costarred with her husband in The Entertainer, on stage and screen -- notes slyly that "none of us was ever in the front ranks of world beauties."

Perhaps so, but the glorious clips from films and stage productions that Michell generously sprinkles through Tea with the Dames shows each actress radiating talent, youth, smarts and sexual vitality. Plowright, the eldest of the group (they’re all in their eighties now) complains of the failing eyesight that halted her career. Mags sneers at her success in Downton Abbey, claiming never to have watched the PBS series that won her three Emmys. She adds, teasingly, that Jude gets all the plum parts, including playing M in eight James Bond films. A bizarre claim since Smith figures prominently in the entire series of Harry Potter films.

Atkins, who co-created the TV series Upstairs, Downstairs and currently stars as Queen Mary on The Crown, is the first to admit to a crippling stage fright. "On my way to the theater I always think, ‘Would you like to be run over now, or in a massive car accident?’ And I only just about come out on the side of ‘No.’" Nodding in agreement, the four Dames talk about the perils of acting with their husbands, now divorced or dead. Dame Joan uses the word "privilege" to describe acting and living with Olivier, adding that it was also "a nightmare." Director Roger Michell wisely just turns on his cameras and lets the ladies rip. No point in giving away any more of what gets said in that garden and in that cottage. Just know that it’s delicious -- sweet, tart, surprisingly moving and funny as hell. Tea with the Dames is an invitation to a conversational feast with four acting paragons who are not above a little profanity and confessions that make them human. Don’t miss the chance to bask in the pleasure of their company.