With all its six air-monitoring machines out of order, the EPD is unable to measure harmful particulate matter (PM) in city’s air. This limits the department’s ability to launch targeted operations against polluters 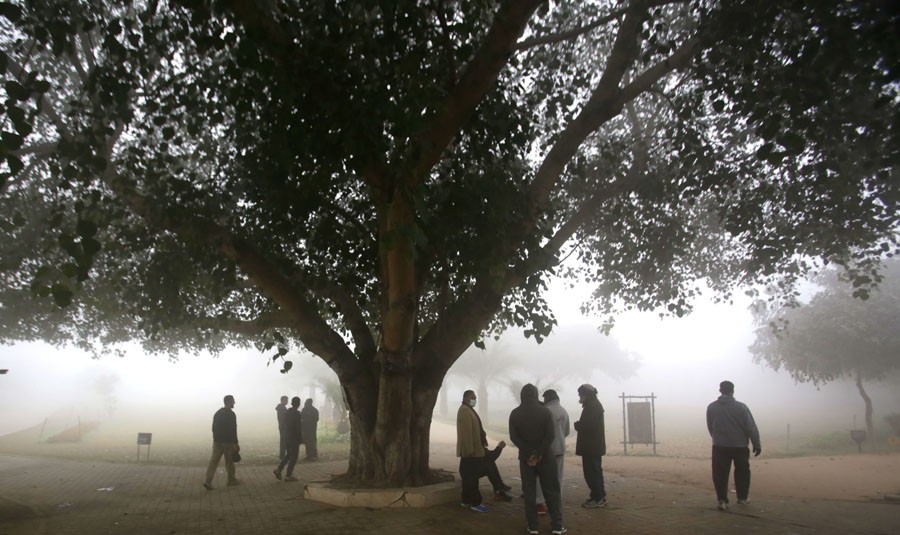 The weather in Lahore is changing and temperature is likely to drop in the following weeks. While the cooler temperatures bring relief to citizens, the government departments are gearing up to tackle a challenge that comes along around this time: thick smog that obstructs visibility and brings life to a halt -- the flights are cancelled and road accidents are a norm. It also destroys crops and causes serious respiratory issues.

What happens is that with the fall in temperature, the water vapour in air condenses and gets trapped under the layer of air formed close to the ground. This phenomenon normally causes fog as the water vapour settles on the particulate matter such as dust present in the air. Of late, however, the increase of pollutants in the air like those generated by harmful emissions and burning of hazardous fuels has led to the creation of smog which can be described as a combination of smoke and fog.

As the ‘smog season’ is round the corner, the Punjab government and the district administration of Lahore have announced emergency measures such as closing down of brick kilns during the season, taking strict action against vehicles emitting hazardous smoke, banning the burning of crop residue, and shutting down industrial units etc.

But one thing that needs to be seen is as to what do these departments do during the rest of the year. Is the Punjab environment department equipped to measure harmful particulate matter present in the air at different locations in the city throughout the year, or this activity is just limited to the smog time?

Aleem Butt, Chief Environmentalist, Solution Environmental & Analytical Laboratory (SEAL), a private sector facility, and member of Environmental Consultants Association of Pakistan (ECAP), asserts that the government is "only taking cosmetic measures, and has failed to execute long-term plans. For example, the Environment Protection Department (EPD) was instructed under the smog policy to carry out scientific studies of different sectors to measure the exact contribution of each to the air pollution created in the city. Instead, the department has been working on guesswork and cracking down on different sectors in a haphazard manner.

"They are not clear whether the main culprit is the brick kiln industry, or the farmers’ community that burn stubble, or it’s the emission from vehicles or the steel industry."

He says that going for solution without determining the exact causes is like treating a patient without proper diagnosis. He points out six air-quality monitors purchased by the EPD around two years ago that are not working. Hence, "the readings about air quality are not real. The purpose of purchasing and installing these machines was to measure the concentration of particulate matter such as PM10, PM 2.5, Ozone, Carbon Monoxide (CO), Sulphur Dioxide (SO2) etc in Lahore’s air but this is not happening at all." (The term particulate matter (PM) is used for airborne particles that include dust, dirt, soot, smoke and liquid droplets.)

While the machines owned by the government are not working, the results obtained by light scattering devices imported from China by the private sector are alarming, to say the least. For example, the value of PM2.5 remains well above the acceptable limit of 35µg/m3 during the year. It has been reported that this figure reaches well above 350µg/m3 in smog, which is ten times higher than the acceptable limit.

"The dangerous particles known as PM2.5 are not visible to the eye and small enough to penetrate into the lungs and the bloodstream," says Samiullah Randhawa, President, Environmental Journalists Association of Pakistan (EJAP).

Randhawa says that it’s a pity that the particulate matter is not measured by the EPD which is criminal, "If the department does not know about the existence of harmful pollutants in different areas at different times of the day and year, how can it do the needful?"

According to a statement by the World Health Organization (WHO), almost 60,000 Pakistanis have died from the high level of fine particles in the air. This endorses the claim made by Randhawa and points to the need for tackling the issue at the earliest. PM10 particles, which are relatively larger in size, cause respiratory problems such as lung infections and asthma whereas the finer PM2.5 particles damage heart function by entering the airways and pulmonary vein and cause ischemic heart disease, lung cancer, cerebrovascular disease etc..

Aleem Butt criticises the EPD for failing to monitor quality but at the same time appreciates certain measures announced by the PTI government in Punjab. He hopes the plantation drive announced in the province shall help to improve things because the loose ground in the absence of plants is one of the major sources of dust particles rising into the air. "Once the plants are there, dust hardly leaves the ground."

TNS contacted the EPD to confirm whether the air quality machines at its disposal were working fine and how it hoped to tackle the situation. Naseemur Rehman, Director, EPD, said that the machines obtained for the purpose were not functioning properly. He also spoke of the EPD secretary calling the contractor who supplied the machines and asking him to fix these as early as possible.

He says that though they do not have perfect data on air pollution and pollutants in Lahore, they have launched an operation against the factories, unfit vehicles, those burning solid waste and crop residues and so on. This time around, stricter action has been taken, as the sealed factories are not being opened without the guarantee of respective chambers of commerce and industry and other umbrella organisations.