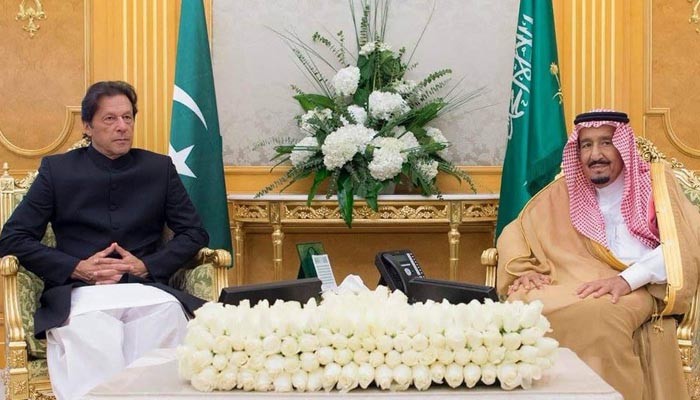 Prime Minister Imran Khan has kept the state tradition alive by visiting Saudi Arabia for his first official trip abroad. It reminded me of Liaquat Ali Khan, who brushed aside an invitation from Soviet Union over a visit to Washington DC, even though the US was not the first to invite him.

Those were early days of Pakistan. Back then, it was struggling to develop a strategic-dependency linkage with the US. More than six and a half decades on, the newly-elected PM Khan is following the same policy.

The Saudi royals honoured their guest generously that included a visit inside the Kaaba, a gesture that is bound to increase Khan’s currency among his Muslim followers at home. This treatment indicates the Saudis would not allow absence of personal ties with Khan to cloud the relations between the two countries.

It seems the Saudis do not want a repeat of 2008 when they were extremely uncomfortable with Asif Ali Zardari, and labelled him the greatest obstacle to the country’s progress. The US embassy cable published by WikiLeaks revealed that Adel al- Jubeir, Saudi Ambassador to the US, had said, "We in Saudi Arabia are not observers in Pakistan, we are participants".

Saudi Arabia would not have allowed the Pakistani prime minister to get cozy with Iran; even though Iranian President Hassan Rouhani called Khan on August 8, before Mohammad Bin Salman Al Saud made the ceremonial call to the newly-elected PM. Iranian Foreign Minister Javad Zarif was the first foreign dignitary to visit Pakistan after the elections.

At this juncture, when Iran is plagued by economic problems, Khan is likely to be more easily drawn to Saudi Arabia. Also, Pakistan is in desperate need of ‘financial injection’ from Saudi Arabia to save it from going to the IMF. Besides, Pakistan has always looked up to Saudi Arabia, for religious identity and cash flow problems.

Saudi Arabia would not have allowed the Pakistani prime minister to get cozy with Iran; even though Iranian President Hassan Rouhani called Khan on August 8, before Mohammad Bin Salman Al Saud made the ceremonial call to the newly-elected PM.

Over decades, Pakistan’s financial needs have led to entrenchment of Saudi stakes in the country. And this time it doesn’t look any different. Currently, in Pakistan, the state of both non-development and development sector are worrying. The security establishment alone lost approximately USD900 million in the US aid, a shortfall that the government would like to fill through financial gifts from Saudi Arabia like it had back in 2013. Therefore, the new government clearly seems willing to create strategic space for Saudi Arabia, by offering it a partnership in the China-Pakistan Economic Corridor.

While the previous government had resisted Saudi pressure to overtly commit troops in the Yemen war, the new government may concede space to Saudi Arabia by allowing it to invest in Gwadar. Even before the visit, there was news of Saudi Arabia and Abu Dhabi investing in real estate in Pakistan’s southern province.

One may question Saudi interest in the Pakistani port of Gwadar -- to pursue Mohammd bin Salman’s infamous Vision 2030 that aims at reducing dependency on oil -- as this would require a generational change in his country to gather productive manpower. His vision looks more geo-strategic. The Saudi investment would augment Gwadar’s value regarding the Iranian port of Chahbahar. This is where Pakistani and Saudi states see eye-to-eye.

Gwadar’s development has additional benefits for Saudi Arabia, as it may give it access to Indian Ocean and Arabian Sea and also help link up with its interests in Central Asia. Saudi Arabia has stakes in Tajikistan and other Central Asian Republics as well.

While Pakistan’s new leader has voiced his intent to play a role of a mediator in the Middle East, in reality such claims are rather ambitious. Despite the fact that Saudi Arabia is willing to give Pakistan space to cater for its own security, considering the large number of Shias in the country, the CPEC partnership will increasingly impose limits on Pakistan’s neutrality.

The Saudi and UAE investment in Balochistan may result in their greater influence in rest of the country. Already, there are reports of Saudi links with insurgent groups in Balochistan just like it has ties with Taliban in Afghanistan independent of Pakistan.

Pakistan’s southern province is infested with both religious and nationalist militant groups that may benefit from Saudi interests. Also, there are religious groups and individuals in other parts of Pakistan that not only get Saudi financial assistance but also represent Kingdom’s larger political interests inside the country.

Thus, even if Pakistan remains unwilling to fight a war in Yemen, it may end up creating bigger stakes for Saudi Arabia inside Pakistan. Besides the traditional Arab versus Persia rivalry that flows in the veins of the Middle East, the current Saudi partnership with the US and their combined aims of restructuring Middle East’s geo-politics have a lot to do with how it wishes to position itself in South Asia.

Although the Pak-Saudi relationship holds its own set of risks for the master-planner of CPEC, China will not be averse to Pakistan opening more doors for it in the Middle East. The Saudi inclusion in CPEC will not have an impact on China’s relations with Iran. The more the energy resources, the merrier China would be. But there is no doubt that both Pakistan and Saudi Arabia will have to walk on eggshells to keep the internal balance and peace.

In the longer-term, Pakistan will secure what it has hoped for since the early 1950s - a key role in the Arabian Peninsula as a mark of Pakistan’s identity as an Islamic state in South Asia.

The Saudi visit will surely leave a mark on how the government’s Middle East policy will pan out in future.