A 1-4 scoreline is hard to ignore. Is being the best among hesitant tourists a truly aspirational benchmark? Had India extracted a draw at The Oval, even 1-3 would have led to the question 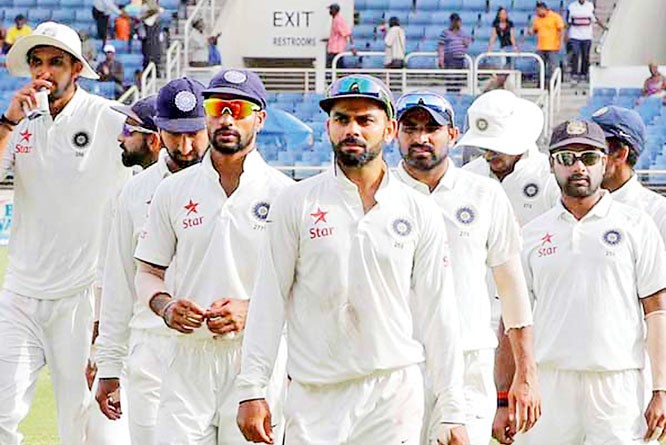 In a little over a week following a tour of missed opportunities comes the perfect cricketing blue pill: India v Pakistan in coloured clothes. No disrespect to the short form, but in terms of a place and time for everything, the Asia Cup has just been the most convenient detour away from the uncomfortable questions thrown up by the 4-1 Test defeat to England. Before getting mesmerised by India v Pakistan in Dubai – and mesmerised every one of us will be – let’s splash some cold water on our memories to revisit what just happened. In England, history waited with open arms, only to be spurned. Not by intention but due to a series of escalating errors by the team’s "leadership group".

Few want the Indian team to do badly in any format, contrary to peevish statements saying so. However, an acceptance that there have been missteps and miscalculations would be welcome – and may eventually help. After the Oval Test, Virat Kohli spoke at length about the character of his squad and the manner in which they had competed. He spoke about adversity being opportunity and playing with the right attitude, and made a wider philosophical observation about how, due to that aforementioned attitude, the game would pay dividends across a career.

Ever since he first captained India – four years ago in Adelaide, producing a breathtaking, swashbuckling century in a failed run chase – Kohli has led by example, willing to risk defeat in the pursuit of victory. These are the fine starting points of a Test captaincy, but they are not the only markers of a leader’s success. Results can rudely step in, disrupt grandstanding narratives, and call for a re-examination of capabilities.

During the England series, the question around which the air began to get a bit wobbly – like the shimmering of a distant mirage – was about where Kohli’s team stood in the world, and in Indian Test cricket overall.

Let’s try to clear the air on that one. Following the Oval Test, Kohli appeared peeved when he was asked whether, after 4-1, he thought this was India’s best side of the last 15 years. In response he testily put the question back to the journalist, like a return gift from a party gone flat. Take that and be gone. Okay, so his feelings were hurt. It was the end of a hard two months, his team had fought doggedly (now about that batting… ) and maybe the question was asked only to rile him or extract a headline-grabbing quote. Well, it worked.

The ICC ranking certainly has India at No. 1, and their performances in an era of poor travellers indicates that they are the best among their peers in competing overseas. Applause. But a 1-4 scoreline is hard to ignore. Is being the best among hesitant tourists a truly aspirational benchmark? Had India extracted a draw at The Oval, even 1-3 would have led to the question.

Kohli talked about the scoreline. "When both teams are going for wins, you can have a result that looks like that. They don’t go for draws." Okay, we get that. As MS Dhoni once described two 0-4 wipeouts in 2011 when asked which had caused lesser anguish: "When you die, you die. You don’t think which is a better way to die."

As compared to Dhoni, who had at one point tried to undercut the importance of succeeding overseas, Kohli takes away tours very seriously and says he wants to win not just the odd Test but series. In England he batted impressively, walking the team’s talk, unafraid to put his neck on the line and say he was there to win the big shebang. No deference, nothing ventured nothing gained, 20 wickets, take no prisoners, change history, etc.

Yet captains – and coaches – are not judged by what they say but by what their teams are able to do. In England, despite much in their favour (Tests in the second half of the season, a support staff the size of the London Symphony Orchestra, a fast-bowling attack sharper and faster than ever before), India fell short. Because of issues to do with man management and situational awareness: the wrong players picked and omitted; the balance of the squad skewed by how the wickets were read; and problems with the speed and flexibility of response when the team’s Plan A – five batsmen-plus-Hardik Pandya – didn’t work.

Yes, India’s batting was woeful, barring Kohli and sporadic flashes from a few, but so was England’s – who were bailed out by their lower-order allrounders in six out of seven innings across four Tests. Regardless of tosses lost, the Indian attack reduced England to 87 for 7 (Edgbaston), 131 for 5 (Lord’s), 86 for 6 and 122 for 5 (Southampton), and 181 for 7 (The Oval, first innings). It is not uncommon for teams to recover from positions of that sort – but to do so no less than five times in nine innings across a series means that something in the opposition is undercooked. Test cricket has truly been rendered

Despite the scoreline, the question that irritated Kohli in his final press conference in England was whether his side had felt under pressure with the claims by its own coach that they were the best side out of India in 15 years. It is possible Shastri’s claim was in keeping with a general trend in public debate in India these days, where bombast and fabrication are aimed at diverting attention from incisive lines of questioning. For Shastri to really believe such braggadocio would be a cause of genuine worry. Of course, coaches must defend their team, but only those in a corner would attempt quite such a sweeping reinterpretation of history.

After 2000, during the early days of the Ganguly captaincy, as journalists we tried very hard to get information from the generation that had started their international cricket careers in the 1990s. About what their senior team-mates and the dressing rooms of the time had been like – how Kapil Dev handled the younger bowlers, for example; or Navjot Sidhu and Mohammad Azharuddin the younger batsmen; and the string of managers the entire lot. Didn’t get a word out of them in public. Zilch. Probity, you realise now, goes a long way and doesn’t need self-advertisement.

We would hear snippets of stories in snatches of private conversation, where comparisons were assiduously steered away from. With the understanding that a bloodline of the good, not-so-good and the great had preceded that generation but the past was the past. They wanted to create their own playbook for Indian cricket – particularly about how they played away from home and how the junior-most in the squad were treated.

What Kohli and his team are doing today is adding to the chapters of that playbook. Whether what they are adding is better or worse, or as Indians call it, "same-same" depends on them. Humility may not be on trend in Indian cricket these days but its earliest benefits are steps towards reflection, awareness, and as CS Lewis described it, "not thinking less of yourself but thinking of yourself less".

Being the best team in the world, the No. 1, is a due recognition of your recent results, but India have been there before. Truly great, epoch-defining cricket teams dominate worldwide. Not only compete hard but dominate, unconditionally. When the opposition is down, they punch their lights out; when they find themselves in jail, they make escaping a habit. Their performances and results do not warrant doubt. India has fielded tough, competitive, wonderful teams in the past. But to this day, India has never fielded a team that has dominated Test cricket. When we see one, we will not have to be told what is what. We will know.