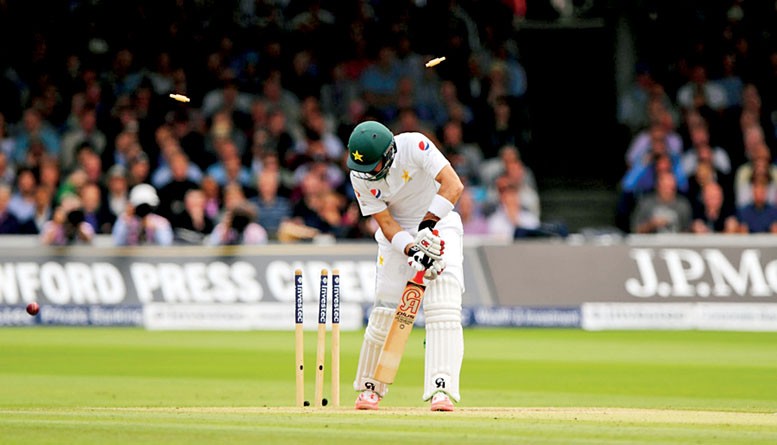 Pakistan batting has always been the main reason behind our defeats. Many cricketing pundits rate Proteas as the biggest chokers who failed to live up to the expectations primarily in the World Cups or Champions Trophy but in reality Pakistan are the biggest chokers. Here we recall some matches in which dismal batting led to losing games in which Pakistan were in the sailing position.

Pakistan won the toss and decided to bowl first primarily because they had woeful memories of the 1975 pool game against the mighty West Indies in which Andy Roberts along with Deryk Murray played a sensational role to sail them home despite West Indies being pounding at 203/9. West Indies posted a total of 293 in their allotted 60 overs but thanks to Zaheer Abbas and Majid Khan both chipping in runs as Pakistan were poised at 176-1 and were determined to knock them out. Wickets kept tumbling at both ends and Pakistan lost by 43 runs. One of the significant reasons for losing was sending up Haroon Raseed who was newly inducted in the Pakistan team. Asif Iqbal was criticised for his defensive tactics.

One of the most watched games as well as the most heart breaking game. Pakistan and India were the favourites for this tournament. For the first time the tournament was held in the subcontinent. The matches were reduced to 50 overs from 60 overs. Australia won the toss and elected to bat first. Pakistan were way too confident of beating the mighty Aussies who had first come so close since playing their last final in the inaugural edition. Pakistan soon lost Saleem Yousuf as he got his finger broken off a delivery from Abdul Qadir.

Sloppy fielding along with dropped catches brought us to the last over which was bowled by Saleem Jaffar. He got hammered for 18 runs in the final over by Steve Waugh. Chasing 267 wasn’t an easy task back then. Pakistan as always lost their openers in quick succession. Imran and Javed tried their best to steady the innings but the task seemed to be an uphill one as the run rate kept climbing. With poor umpiring decisions, Pakistan were bowled out for 249 runs. The road to glory was over. Fans were truly disappointed and Imran decided to retire from the game.

The World Cup had returned to the subcontinent. Pakistan were definite favourites to win this game due to their superior line-up along with better performances against the Indians in the recent times. Wasim Akram decided not to play this game. Thus the helm of affairs went to Aamir Sohail. India posted a total of 288 thanks to a cameo by Ajay Jadeja who hit two towering sixes off Waqar Younis in the 47th and 49th overs. Pakistan were off to a flying start due to Aamir Sohail and Saeed Anwar who both were in prime form. But who knew fate was not on our side. With Aamir Sohail throwing his wicket after a little altercation with V Prasad in the 15th over, Pakistan started losing wickets. Salim Malik along with Javed Miandad tried to steady the innings but Javed couldn’t repeat his heroics of the 1986 Austral-Asia Cup final. After he fell there was no hope of recovery. Back home players were told not to come back due to their defeat against India. Wasim was accused of fixing the match.

Pakistan won their last Test match against Australia in their tour of Australia in 1995. Pakistan had one of the biggest chances to beat them in Hobart Test where Australia managed to chase 369 thanks to umpiring of Peter Willey along with Adam Gilchrist’s 149*. Due to the 9/11, foreign teams refused to travel to Pakistan. Pakistan decided to play one of their games in Sri Lanka. Shoaib Akhtar dismantled the Australian line-up in 5 overs in the second innings as he picked up five wickets for 17 runs. Pakistan needed 314 runs to win the Test. Imran Nazir and Taufeeq Umar provided a start of 91. Despite consolidated performances from Faisal Iqbal, Taufeeq and Younis Khan, Pakistan once again disappointed their fans as they lost by 41 runs.