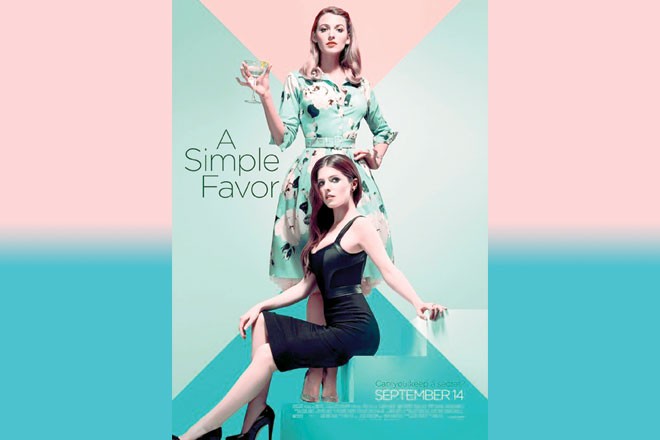 As he proved with Bridesmaids, Spy and The Heat, director Paul Feig knows how to bring out the scrappy best in actresses (he’s a modern-day George Cukor). And in A Simple Favor, Anna Kendrick and Blake Lively shine as they rarely have before. True, the script, adapted by Jessica Sharzer from the Darcey Bell novel, meets at a crossroads between comedy and thriller without deciding which direction to go (our vote: head for the giggles). But until an ending that flies ruinously off the rails, A Simple Favor is raunchy fun that offers an unexpected take on the twists and turns of female friendship.

Kendrick plays Stephanie, a volunteer-crazed single parent who’s the living definition of a helicopter mom to grade-school son Miles (Joshua Satine), with a mommy vlog watched mostly by herself. Her husband and half-brother both died in the same car accident, and -- in a tantalizing and telling bit of counterprogramming to Stephanie’s established persona -- the script remains unclear about which one is Miles’ father. Lively takes the role of Emily, a strutting, stiletto-clad fashionista whose attitude is as cool as the gin martinis she serves dry and ice cold. The comparatively homely Stephanie does not understand why this glam diva has invited her to her sleek Connecticut mansion for a drink. It’s true that Emily’s son, Nicky (Ian Ho), is in the same class as Miles. But Stephanie, who wears animal-print socks from Target, and Emily, a power publicist for a couture house in Manhattan, are hardly natural BFF material. When Stephanie suggests a play date for the boys, Emily deadpans, "I already have a play date with a symphony of antidepressants." From Gossip Girl on, Lively has portrayed more than her fair share of goody-goodies, so it’s a treat to watch her bring out her inner mean girl. Emily schools the perpetually contrite Stephanie in the art of never having to say you’re sorry: "Baby, if you apologize again, I’m going to have to slap the sorry out of you."

Feig distracts from the sound of plot gears grinding by giving Kendrick and Lively a real chance to make characters of the cardboard cutouts they’re playing. Loosened up by those chilled martinis in Emily’s airy modern living room, the ladies are soon sharing secrets about sex and indulging in a kiss. Enter Emily’s author husband Sean (Henry Golding of Crazy Rich Asians), who does everything but get it on with his wife right in front of their flustered guest. It’s then that Emily asks her new friend for that simple favor -- could she pick up Nicky from school?

Days later, when Emily still hasn’t come home (Sean is busy caring for his sick mother), things take on a sinister tone. That leads Stephanie to play amateur sleuth, letting Kendrick show her flair for physical comedy. On her vlog, Stephanie shares the story of her missing friend, and her viewership starts spiking. She visits Emily’s office and has a run-in with her haughty boss, fashion designer Dennis Nylon (hilariously played by Rupert Friend, having a blast on a break from gloomy roles such as Peter Quinn on Homeland). Regarding Stephanie like an insect who’s crawled up his pant leg, he quips, "Never wear a vintage Hermès scarf with a Gap T-shirt. If you were truly Emily’s friend, you’d know that."

The real pain starts when the cops get involved, and the plot settles into a whodunit and a question of whether that "who" had help. It’s Hitchcock 101 with a mechanical feel that slows the momentum built up by the characters. It’s not hard to figure out where the story is going, yet Feig keeps the mystery percolating while Kendrick and Lively perfect all the plays that prove they’re a dream team of opposites. Flying over the obstacles the script puts in their way, they turn A Simple Favor into a raunchy, R-rated laughfest. Don’t miss the chance to watch these livewires set off sparks.

Ian McEwan writes great novels that most often turn into problematic movies, some wonderful (Atonement), others WTF happened (On Chesil Beach). The Children Act falls somewhere in the middle, bolstered by a supremely confident and indelibly moving performance from Emma Thompson as a family court judge trying to practice what the law preaches. Thompson plays Fiona Maye, who has dedicated her life to the principles set forth in the 1989 British law known as the Children Act, which protects and prizes the welfare of minors. So devoted is Fiona to the cause that she has let her childless, 30-year marriage to husband Jack (Stanley Tucci) fall by the wayside. This neglect prompts Jack to ask permission to seek intimate gratification elsewhere. That his cruel choice is a younger woman prompts Fiona to file for divorce.

Such a contrivance feels like pure soap opera, though Thompson and Tucci play it for real. But the soul of the film, directed by Richard Eyre (Notes On a Scandal, Iris) from a script by McEwan himself, rests with Fiona in court. The case in point involves Adam Henry (Fionn Whitehead), a 17-year-old Jehovah’s Witness whose religious parents (Ben Chaplin and Eileen Walsh) argue against a blood transfusion that might save his life. In an unprecedented move, Fiona visits the boy in the hospital, trying to understand why this talented, young poet and musician would choose to let leukemia do him in at the expense of a full and promising future.

From the moment Fiona sings the lyrics of Yeats’ ‘Down by the Salley Gardens’ while Adam strums on a guitar, there is little doubt that Fiona will opt for life. No spoilers here, the event happens early. What raises the bar in McEwan’s novel and Eyre’s too stolid film version is how Fiona’s decision affects her own life as powerfully as the boy’s. Ready to mark the case closed and move on, Fiona is astonished that Adam will not leave her alone. He follows her out of town on a business trip, insisting on a closer relationship with this woman who has acted for his benefit against his own faith. Fiona is accustomed to being treated with the formality her position warrants. Even outside chambers, her court clerk Nigel Pauling (Jason Watkins) addresses Fiona as "My Lady." But Adam is blunt and personal, demanding to know what "My Lady" is going to do with this life she’s pulled from the fire. In a powerful scene, in which the boy looks at Fiona with a mix of desire and obsession, Thompson reveals a woman buffeted by forces she’s labored for decades to keep at a safe distance. She’s not safe anymore.

The Children Act never again reaches the intimate heights of that transcendent moment. Its resolution feels more by-the-book. But Thompson never disappoints, nailing every nuance of a judge who lets the world in at the cost of losing her own judgment. This is acting of the highest order.