Trump and the F-word 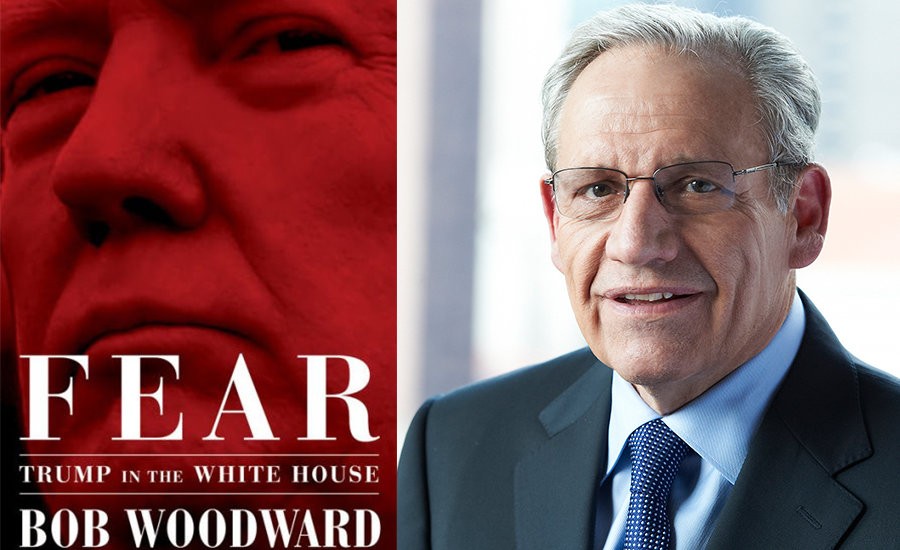 The seemingly never ending barrage of literature issuing damning verdicts on the Donald Trump White House continues with precipitous escalation. From Michael Wolff’s Fire and Fury which echoed allegations of treason, to former FBI director James Comey’s A Higher Loyalty which underlined the US President’s struggles with the truth, to Omarosa Manigault Newman’s Unhinged which addressed his penchant for supremacism -- the assault on Trump is unrelenting.

While the insiders’ accounts, including Sean Spicer’s The Briefing, carry their own weight, when it comes to those on the outside looking in, especially from the media, there are few bigger names than Bob Woodward.

In his almost half a century as a full-time journalist, The Washington Post Associate Editor Woodward has covered nine presidents, bringing Richard Nixon down with the Watergate story. His latest release Fear: Trump in the White House provides insights on how exactly the US President makes critical decisions such as those on the economy and national security.

More scandalously, however, the book narrates efforts of the White House staff to forestall the president’s reckless manoeuvres in a bid to ‘save the country’.

The greatest tribute to Fear has come from Trump himself who said, "This idiot Woodward… wrote this book, which is all fiction" and also separately tweeted, "The Woodward book is a scam. I don’t talk the way I am quoted. If I did I would not have been elected President. These quotes were made up. The author uses every trick in the book to demean and belittle. I wish the people could see the real facts -- and our country is doing GREAT!"

With a recent anonymous Op-Ed in The New York Times underlining resistance within the White House working against the president, Fear: Trump in the White House is the latest high profile piece of literature denting the US president’s credentials to hold office.

Divided into 42 chapters, the book dedicates the first five to the build up towards the 2016 Presidential elections, echoing the widespread claims about how unorthodox Trump’s campaign was and how outrageous his triumph.

The then Republican National Committee Chairman Reince Priebus had asked Trump to drop out, following the "locker room talk" video or "lose in the biggest landslide in American history and be humiliated for life".

But without dwelling too much on how and why Trump got into the White House, the book focuses on what has been happening since he got there, beginning with the shaping up of the president’s team, which in itself has been a hub of volatility.

How the hiring process works under Trump comes through the appointment of Peter Navarro, the Director of the White House National Trade. When the then Director of the National Economic Council Gary Cohn convinced Trump that 99.999 per cent of top global economists would disagree with his understanding of trade deficit, the president brought in Navarro, quite possibly the only one who agreed with Trump. How dangerously uninformed Trump is about the economy -- and pretty much everything else -- can be gauged by his suggestion to Cohn that the US just ‘print more money’ to bolster its reserves.

"Cohn concluded that Trump just loved to pit people against each other. The president had never been in a business where he had to do long-term strategic thinking. He went to see Trump to explain that he was resigning. ‘If this is the way you’re going to run the place,’ Cohn said, he was going to leave. ‘I can deal with losing a battle in the White House as long as we follow proper protocol and procedure. But when two guys get to walk in your office at 6:30 at night and schedule a meeting that the chief of staff and no one knows about, I can’t work in that environment’."

The book narrates scene after scene of chaos inside the White House, beginning with Gary Cohn stealing a document from Trump’s table in the Oval Office because he felt that if signed it would jeopardise American security.

Another conversation during the National Security Council meeting has US Secretary of Defence James Mattis having to tell Trump that troops in South Korea -- which the president frets over along with KORUS throughout the duration of the book -- are needed to "prevent World War 3".

When Syrian President Bashar al-Assad reportedly targeted the city of Khan Sheikhou in a chemical attack, Trump said the US should assassinate him. After his reaction to the Charlottesville violence was prompted as the US president siding with the neo-Nazis, a clarification ensued, about which Trump said "That’s the worst speech I’ve ever given. I’m never going to do anything like that again."

Fear: Trump in the White House also helps us understand the current regime’s Pakistan policy, with former National Security Advisor Herbert Raymond McMaster coming up with the plan to "increase pressure on neighbouring Pakistan, which was playing a double game".

White House has remained paralysed by Robert Mueller’s Russia probe, resulting in tensions between Trump and his personal attorney John Dowd, who eventually stepped down owing to an overriding that the president was a "f**king liar" something Dowd could not bring himself to say.

The F-word cuss is thrown about in White House conversations often, depicting high school kids more than policymakers of the United States. Former Secretary of State calls Trump a "f**king moron", Chief of Staff John Kelly regularly calls him an ‘idiot’, while Mattis compares him to a 5th or 6th grader.

Even so, the F-word donning the title of the book comes from what Trump said in an interview two and a half years ago: ‘real power is fear’. And though the book portrays the US president as someone who seeks clout through intimidation, it also depicts him as one living under constant, even if impalpable, fear.

Trump and the F-word