Kulsoom Nawaz, the shock absorber of the Sharif family, is no more 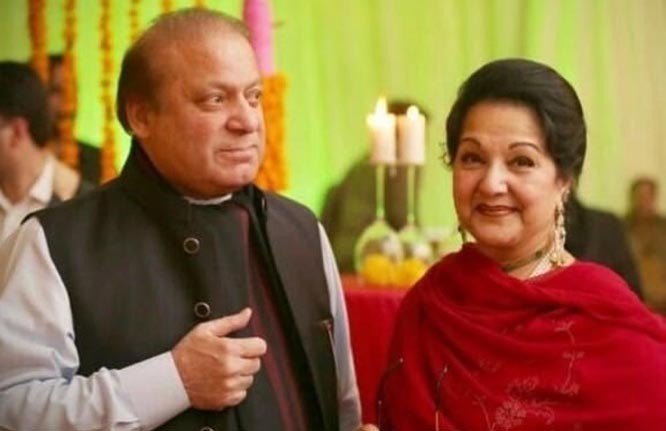 Wives of some Pakistani politicians are like traditional mothers who always remain on the giving end. Whether it was Begum Nusrat Bhutto or Begum Kulsoom Nawaz, they ended up earning pain and grief out of politics. Compared to them, the men in politics or husbands like Zulfikar Ali Bhutto and Mian Nawaz Sharif got to enjoy a fair degree of power before their actual pain and hardship began.

Like an archetype mother, Kulsoom Nawaz came on the political forefront only when her husband and family were in trouble and withdrew silently to the back-bench as soon as the Sharifs were in power again. She was the shock absorber of the Sharifs who would bear the brunt of bad times on herself to save her husband and children.

She remained a low-profile housewife but, in crucial situations, she would lead from the front. This change of role would not sit easy with an ordinary person but this was Kulsoom Nawaz. Though, with hindsight, it appears she enjoyed the backseat in her home a lot more than street politics.

She had no formal knowledge of politics and, yet, was the main adviser to Nawaz Sharif on matters of politics. Nawaz Sharif is known to discuss all political issues in family sittings.

Once Maryam Nawaz told me her mother was quite farsighted and her predictions about future politics always turned out to be correct. Among the entire Sharif family, Kulsoom Nawaz was considered to be a wise, level-headed woman whose reading of personalities was nearly perfect.

The larger Ittefaq family has a tradition of marriages within the family. Most cousins are married to each other. In this sense, she was an outsider in the Ittefaq household, even though she too was Kashmiri. Mian Muhammad Sharif, the patriarch, is not seen in the wedding pictures of Nawaz and Kulsoom, confirming the notion that he did not approve of this match initially. But, later on, this outsider daughter-in-law gained trust of the conservative Mian Sharif to an extent that he nominated her to lead the political campaign against Musharraf’s martial law instead of any male from the family.

Kulsoom’s presence in the Sharif family was so strong that all her sons and daughters had the freedom to choose their life partners. It was she who backed Hussain and then Maryam to go ahead with love marriages.

The best, and perhaps the worst, time of her life was her campaign against Musharraf. All the stalwarts of the party were avoiding her to save themselves from the wrath of the martial law. The housewife knocked Nawabzada Nasrullah Khan’s door and was able to form a joint alliance (Alliance for Restoration of Democracy) with archrival Pakistan People’s Party. She organised rallies and public meetings against the regime. The tempo of her campaign disturbed the peace of the installed setup and, to neutralise this pressure, the regime exiled the Sharifs to Saudi Arabia -- to earn political stability for Musharraf.

Her last protest on the Lahore’s canal bank proved to be a fatal blow to Musharraf regime. Her car was stopped and hooked by a crane. She remained hung in the air for hours, and this courage of hers led to her becoming a symbol of resilience.

Kulsom was a great fan of Urdu’s top novelist Qurratulain Hyder and once met her also to pay tribute to the great writer.

It was again Kulsoom Nawaz who chose Maryam to be the political heir of her father rather than their two sons Hussain and Hassan. She had a great influence on husband but she was wise enough not to let it be known that Nawaz Sharif mostly acted on her advice. She was sympathetic and good natured. It was she who stopped Saif Ur Rehman to burn the bundles of Daily Jang in 1998-1999. At a time when Nawaz Sharif was not agreeing to get his biographical account Ghaddar Kaun that was penned by me printed, it was Begum Kulsoom who helped me by trying to convince and advocate that the book should be printed.