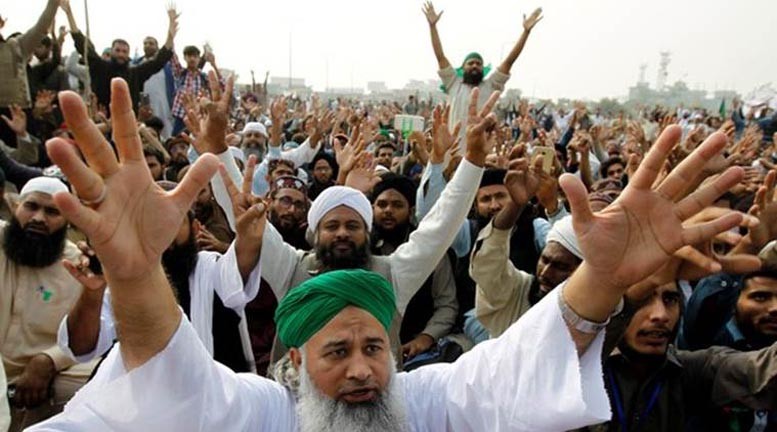 The sudden rise of the Tehreek-e-Labbaik (TLP), an extremist political organisation vying for the sectarian allegiance of the largest Muslim Barelvi sect in Pakistan may appear organic on the surface but it has deep roots in ancient and recent history of this region.

Even before the arrival of the European colonialists in the 17thcentury, the ruling Muslim elite in India bore clear sectarian divides. The Muslim equivalent of low-church, broadly encompassing both Shia and Sunni mystic streaks with a tilt for tolerance and pluralism, stood in stark distinction from the so-called high-church of stringent Wahabi school which placed premium upon puritan forms of faith coupled with strong partiality for jihad aimed at political supremacy for Muslims as against non-Muslim majority in the Indian subcontinent.

A prominent example of the latter school was Shah Wali Ullah (1703 – 1762) who wrote letters to the Afghan ruler, Ahmad Shah Abdali, inviting him to restore Muslim political supremacy in India. The counterfoil to Shah Wali Ullah’s authoritarian approach was a sprawling system of shrines and seminaries with large tracts of agricultural land attached to ensure the subsistence of these institutions.

There is compelling evidence that the ostensibly docile and reconciliatory façade of Sunni and Shia schools was not without strong political under-currents. The enormous public following of these shrines and seminaries acted as a dynamic instrument of human information as well as political agenda setting. As such, both strands of stringent and supple Islam carried strong political affiliations in the struggle for political power.

From among the assorted Europeans colonialists, the British emerged as victorious. The British soon realised the political potential of the religious divisions in India and decided to orchestrate the scenario rather than demolish it. It is interesting that the early 19th century revolt against the Sikh rule in Punjab and adjoining areas was led by Syed Ahmad Shaheed Barelvi (1786-1831) who was a disciple of Shah Abdul Aziz, the son of Shah Wali Ullah.

The closest companion of Syed Ahmad Shaheed Barelvi was Shah Ismail, a grandson of Shah Wali Ullah himself. Renowned historian Edward Mortimer believed Syed Ahmad Shaheed Barelvi to be the idealogical inspiration for later day political Islamists and jihadists, especially the Deoband seminary which nurtured anti-imperial sentiments around the turn of the 20th century.

Interestingly, Syed Ahmad Shaheed Barelvi belonged to the town of Raebareli (Oudh) and the founder of modern-day Barelvi school of Islam, Ahmad Reza Barelvi was born in the same town in 1856. Without prejudice to the jurisprudential and doctrinal difference between the Deoband and Barelvi school, it is interesting to note that both schools originated from feudal North West of India where Muslims formed a numerical minority but, importantly, owned huge agricultural estates and high social status.

The West had long viewed Barelvi Islam as a more benign form of Islam with Sufi strands and hardly any violent past. In the late 2000s, Pakistan’s establishment tried to reach out to Barelvi School in the hope to counter Deobandi School.

The communal character of the liberation movement espoused by the All India Muslim League carried three hallmarks, (a) the landed-aristocracy among the Muslims resided in Muslim minority areas; (b) The majority of the Muslims resided in north-western India which lagged behind the north-eastern parts of India in terms of socio-political evolution as well as economic development; and (c) the British rulers instilled the fear of democratic majority among the Muslims so that they could prolong their rule in India by keeping the two largest faith-based groups, i.e., Hindus and Muslims divided.

The Pan-Islamist ideas, largely believed to be supported by the Ottoman Empire might not have won the First World War for the Turks but its influence in India served a collateral purpose for the British rulers. The Muslims in India began to view Hindus as their real opponents instead of the colonial rulers. The struggle for freedom in India followed two distinct lines, freedom from the British for the largely Hindu Indian National Congress and freedom from the supposed Hindu hegemony for the All India Muslim League.

In the wake of the Indian partition, this communal scramble created huge problems in defining three fundamental questions in Pakistan, (a) nationhood; (b) democracy; and (c) modernity. The newly created state of Pakistan inherited only 17 per cent of the economic resources of the British India but 34 per cent of the British army. The weak political infrastructure in the new state coupled with formidable economic challenges and the country soon lost its democratic vision.

The world was at the cusp of the Cold War and the powerful military in strategically located Pakistan could dream of joining hands with the capitalist West. The orthodox Muslim clergy, never known for republican aspirations or democratic egalitarianism, had a windfall in the form of an overwhelmingly Muslim majority country and lost no time in nurturing ambitions of a theocratic state where their will or word would be the law of the land.

However, the people of Pakistan, while strict adherents of their faith, were unwilling to surrender their political authority to the semi-literate clergy. The clergy found a reliable ally in the form of military establishment. The armed forces of Pakistan had inherited the political authority of the military in British India; had played virtually no role in the struggle for liberation and looked down upon the political leadership.

The founder of the nation breathed his last barely a year into independent Pakistan and his descendants lacked the spine to stamp their political authority. The mullah-military nexus was formed well before the first Pakistani commander in Chief, General Ayub Khan, took the reins of the armed forces in January 1951.

The phony Kashmir war in 1947-48 revolved around religious sentiments rather than the defense consideration of a sovereign state. Pakistan joining SEATO and CENTO allowed the clergy to call shots at home. Pakistan army erected civilian militias in erstwhile East Pakistan with the active support of the religio-political parties.

Even before the first Soviet soldier stepped into Afghan territory in December 1979, Pakistan, USA and Saudi Arabia had formed a covert military combine in which the jihadist sloganeering was to be the rallying drive. The Afghan war (1979-1988) was a gift-outright for Saudi Arabia who was keen to establish a foothold in the neighbourhood of an Islamic Iran, its traditional rival in Middle East.

Thus began the alliance between Pakistan military and Deobandi Islam. It worked well till 9/11 in 2001. The world was no longer willing to tolerate Deobandi jihadist Islam. The Pakistan did its best to drag its feet as long as it could but the state of Pakistan lost a good measure of control over its own creation when Tahrik-i-Taliban Pakistan decided to take on the state of Pakistan.

The West had long viewed Barelvi Islam as a more benign form of Islam with Sufi strands and hardly any violent past. In the late 2000s, Pakistan’s establishment tried to reach out to Barelvi School in the hope to counter Deobandi School. Saudi Arabia, in the meantime, had entered an altogether different phase and apparently no longer interested in feeding its Wahabi protégés.

While uncomfortable with the Taliban militancy, the military establishment is still unwilling to eschew its religious optics. Tehreek-e-Labbaik is no flash in the pan. The Barelvi School has long felt left out of the power game and is raring to go for its pound of flesh. The catch here is that the Barelvi School may not harbour international ambitions; it is more amorphous and fissiparous at home.

Hardly one year into the electoral arena, Tehreek-e-Labbaik has already garnered 2.2 million votes in July 2018, making it the fifth largest party in the country in terms of total votes. The mass appeal of its central slogans is a tinderbox, so sensitive that weak political parties are unlikely to brave the onslaught of religious sentiment. The entrenched establishment may feel stronger for now with a handy religious instrument at hand with little international strings, the fall-out at home is bound to be at least as volatile as Taliban or Daesh.