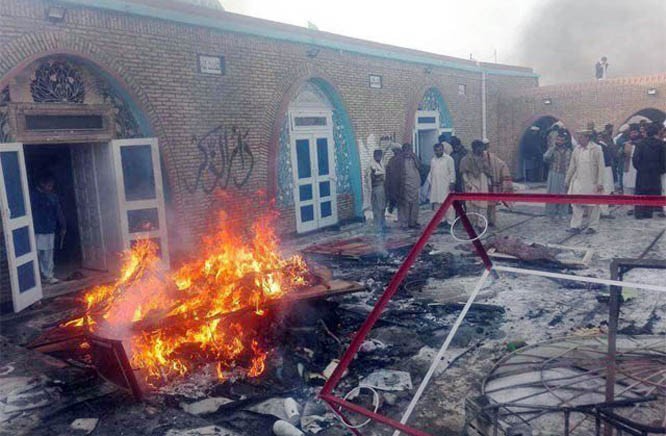 "What happened to Dr Atif is nothing new to us and happens every day to Ahmadis in Pakistan," Aamir Mehmood, spokesperson of the Ahmaddiya Community, tells The News on Sunday, over phone from Rabwah, a city in the Punjab province which is also known as Chenab Nagar.

He was referring to the controversial appointment of economist, also professor at the Princeton University, Dr Atif R. Mian, to the Economic Advisory Council. Within three weeks he was asked to step down by the newly elected Pakistan Tehreek-e-Insaf (PTI) government. A tweet from Mian gave the reason thus: "…adverse pressure regarding my appointment from the Mullahs (Muslim clerics) and their supporters".

The Ahmadis belief that Mirza Ghulam Ahmad, a 19th century cleric, "was the messiah promised by God", is unacceptable to majority Muslims in Pakistan.

In 1974, under pressure from the religious clerics, the then president of Pakistan, Zulfikar Ali Bhutto, declared the approximately five million Ahmadis living in Pakistan as non-Muslim. In 1984, through a discriminatory ordinance, military dictator, General Ziaul Haq prohibited them from identifying themselves as Muslims and criminalising their religious practices.

And over the last 44 years, says Mehmood, the state-sponsored discrimination has only grown and "we are being forced to the wall".

Human rights lawyer, Yasser Latif Hamdani says by not repealing or amending the discriminatory legislations, the state has been "complicit" in abuses perpetrated against the Ahmadis. So is each and every Pakistani citizen who has yet to refuse to sign an affidavit when applying for a national ID card or a passport stating: "I consider Mirza Ghulam Ahmad an impostor prophet. And also consider his followers, whether belonging to the Lahori or Qadiani group, to be non-Muslims".

"I feel I am doing something reprehensible, but I have done it not once but every five years my passport expires!" says Sohaila Waqar, 65-year-old doctor belonging to the Sunni community. Without signing that document that she is forced to, she cannot have the travel document.

Meanwhile, the hatred for Ahmadis continues to grow. "Our community members are a frequent target of mob violence and our places of worship routinely desecrated," says Mehmood.

Over the years those from the community who could afford have emigrated. Those still around hide their identity. Because once their faith is disclosed they have to face harassment and antagonism, specially at their places of work. "It has only grown and become overt," says Mehmood.

Over the years those from the community who could afford have emigrated. Those still around hide their identity. Because once their faith is disclosed they have to face harassment and antagonism.

Thirty five-year-old Mohammad Saleem*, food technician at a beverage company, where he had happily worked for nine years and received several promotions, had to leave work earlier this year.

Although people knew he was an Ahmadi and he had learnt to let the snide remarks pass, the trouble actually began for him when he reported a fraud to the management, happening under his very nose in a section he was heading.

"Before I knew what hit me, posters with my photo had been plastered all over the factory, declaring I was preaching and converting people to the Ahmaddiya faith," adds Saleem.

The management reacted quickly and resolved the situation. But it only simmered down, for a month and next we saw posters appearing in the main marketplace of the city he worked in. A religious group informed the area police they would be taking out a rally as well.

"The situation got so tense that the management transferred me to an office in another city overnight. They were very supportive and tried their best but I was neither suited nor qualified for the new work and I decided to leave," says Saleem, adding: "They tried to stop me but my mind was made. They said it was their loss since a competent worker had to leave so unfairly," and even "apologised for not having my back".

Thirty-seven year old Ali Habib*, an engineer in the Pakistan Air Force, has a similar story to tell. "I converted into an Ahmadi after I had joined the air force. When my seniors found out, everything changed, and I was declared an apostate, therefore wajib ul qatl (duty-bound to be killed). A case was filed against me that I was preaching my faith, which I fought against, for almost three years."

Fortunately, for him, on cross-questioning, his batch mates proved that assertion to be false. But during that time he not only faced a complete social boycott at the base (where even utensils in the mess were kept separate), but even from his immediate family. "I was under a lot of stress; even my parents and wife refused to meet!"

His supervisors also reprimanded him for not having taken permission to change his religion since he had declared himself a Muslim when he joined the air force. "I countered with examples of colleagues, who had converted while in service, from Christianity to Islam, and who were rewarded with promotions and who had not taken any prior permission either."

When the air force could not find anything to court martial him, he was forced to resign. "I was asked to leave within 24 hours. My immediate supervisor, apologised to me and told me my performance had been exemplary, but they could not retain me in service," says Habib.

Sadly, he was not given any benefits that were his due for the years he served in the air force. In addition, to this date all his important documents, including his educational certificates, remain with them despite his repeated requests. "It’s been three years now, and I cannot prove my credentials — neither my work experience nor my educational qualification — to be able to find a good job."

Shafiq Ahmed*, 39-year-old primary school teacher in a government school in a village in Punjab, has had to change schools four times since he came into the teaching profession six years ago.

"Every time, I am told the parents do not have any complaint against me as a teacher, just that they don’t want their kids to be taught by a ‘Qadiani’. The villagers are simple people and they hold the area cleric with utmost respect. So when he tells them being taught by an Ahmadi is worse than being taught by a kaafir, they believe him!" The only reason he remained in one school for over a year was because they did not have another teacher so the parents and the education department were compelled to hold on to him.

According to Mehmood, matters are far worse in Punjab than in the other three provinces. "There is now a ban on publishing and distributing any kind of literature even within the community including the magazines that were published for women, children and youth, our websites are blocked too," and thus a complete shut down on communication.

Earlier in 2010, the Punjab government had made it mandatory for students to reveal whether they were ‘Muslim or non-Muslim’ before being admitted to school or college, or even before registering for the board exams.

In March this year, the Islamabad High Court (IHC) chief justice, Justice Shaukat Aziz Siddiqui narrowed public space for the community when he passed an order stating that anyone seeking the CNIC, passport, birth certificate, registration in a voters’ list, and appointment in government and semi-government institutions — especially the judiciary, the armed forces or the civil service — must sign an affidavit disclosing their faith.

After the detailed order came in July, many Pakistanis are up in arms having found it to be not only discriminatory but extremely disturbing.

Writer and journalist, Mohammed Hanif, finds it "grotesque". "According to my understanding [it is] a clear violation of our constitution which says that if a person is qualified for a job he/she can’t be discriminated against because of their religion, race or gender."

Terming it a "religious apartheid of the worst kind", Hamdani, who is a former visiting fellow at Harvard Law School, on religious freedom under Pakistani Constitution, says the IHC chief justice also wants Ahmadis to put Qadiani as their last name. Liking it to the Nazi Germany, he says, it was "worrisome" because it seemed that Pakistan was "heading towards a genocide". He hoped there were enough people to resist this.

But IHC’s order did not just come out of the blue. It was triggered by something that happened last October when the parliament tried to bring a slight change in a clause of Khatam-e-Nubuwwat in the Elections Reforms Bill 2017.

The then little known Tehreek e Labbaik Ya Rasool Allah began a sit-in by at Faizabad — between Islamabad and Rawalpindi — accusing the government of having committed "blasphemy" by omitting a requirement for Ahmadi voters to declare they are not Muslim. The same month, the Islamabad High Court then reversed all amendments in sections of the Elections Act pertaining to the Khatem-i-Nabuwwat oath.

PM Imran Khan, during his election campaign earlier in July, never forgot to mention and accuse the then ruling Pakistan Muslim League-Nawaz (PML-N) of committing "blasphemy" by changing the oath. It seems it is now Khan’s turn to face the wrath of the very same extremists he was pandering to.

After the recent capitulation by the PTI to them, Hamdani has little hope for "Jinnah’s vision of Pakistan" to materialise. He sees "no way forward" from the current lot.

"What we need is a political party — a patriotic Pakistani political party — that reaffirms Jinnah’s Pakistan and on issues such as Ahmadis," says Hamdani. Unfortunately, he adds, there was too much violence and hatred for anyone to risk their necks at this time. "One thing is certain the PTI government is hopeless; certainly the judiciary is not likely to step up to the plate and the army does not care for anything but their own interests!"

Names have been changed to protect the identity of these people and the name of the cities they now live or work have purposely not been disclosed.