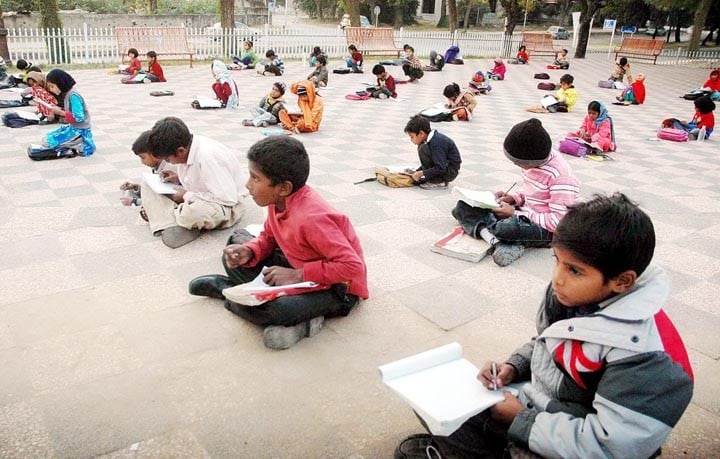 The very first meeting of the National Task Force on Education constituted by the Federal Ministry of Education and Professional Training took place in Islamabad on September 10, 2018. The task force was composed of 15 members (14 men and one woman), as well as the provincial ministers of education. Mufti Muneeb joined through video link, representing madrassahs. A key agenda item of the task force was to "suggest a uniform education system for the country."

I conducted a quick sentiment analysis of all publicly visible tweets mentioning the terms "PTI" "education" "uniform system of education" and "uniform curriculum" using the Twitter sentiment analysis tool sentiment viz. According to results shown below, as of this writing, public sentiment on this issue is overwhelmingly positive and trends towards "pleasant".

That is to be expected. Who does not want a level playing field?

The "uniform system" of education was a key agenda item in Imran Khan’s election campaign. ‘Uniform’ is an excellent choice of word to win public support in a highly inequitable country where access to basic health and education services is determined by the size of one’s pocket. However, posts and writings show that what is understood by a uniform education system varies from person to person.

In this article I have tried to look beyond the slogans and tried to reach the meaning and substance behind them. The three principal ingredients of "uniform education" being considered include; (1) Introducing minimum quality standards and issuing a single school leaving certificate in order to enable student mobility; (2) Ending foreign curriculum and examination systems in private schools, e.g., Cambridge Assessment International Education (CIE) (includes O/A-level, IGCSE), International Baccalaureate (IB), etc.; (3) Mainstreaming madrassas (religious seminaries) by including regular school subjects in addition to their own syllabus.

Let’s dissect these three aspects one by one to wrap our heads around what each one really implies.

The idea is to issue a single school leaving certificate to everyone passing out of a school to facilitate mobility and ease of admission after school completion. Sounds straightforward but not really. Post 18th amendment, education is now within the purview of provincial governments. Fully or partially reverting this mandate back to the federal government requires a constitutional amendment, which is unlikely to pass.

Since PTI is in power in three provinces (coalition in Balochistan) and the federal government, one way could be to seek voluntary participation from at least the three provinces. Sindh’s participation, however, will be problematic and unlikely. The Interprovincial Education Ministers Conference will be an opportunity to build a consensus on this issue. Minimum curriculum standards and a curriculum framework that will underlie the ‘uniform system’ already exist at the national level and are largely accepted by provinces. Whether or not these are reflected in textbooks and examination systems is a separate question worth investigating. Other operational issues to be considered will include what this means for school term, vacations, etc.

The challenges to the public school system could not be resolved in the last 70 years, and it is unlikely that fifteen wise men and women on a task force are going to be able to quietly solve them now, all by themselves.

This element of the education system unification agenda is the most problematic for proponents of alternatives to the local examination system, such as Cambridge Assessment International Education (CIE), International Baccalaureate (IB), etc. The PTI’s stated goal is to do away with these foreign examination systems and enforce an overhauled version of the local curriculum and examination systems in all schools. Of all its goals, this one is the single most misguided of all. The PTI’s own education policy documents explicitly praise the CIE’s assessment methods as exemplary, and express a desire to adopt the same. Improving our public school system by adopting elements of CIE and matching it in its output is easier said than done.

Instead of letting the country’s public school system compete against CIE and others, the prescription being given here is to re-establish a monopoly and take away parents’ and students’ choice, all in the name of providing equal opportunities. Forcing all students into an inferior and corruption plagued public school system, even those with the means and abilities to escape it, is like handicapping people by unnecessarily tying their hands. The super-rich will still be able to escape these constraints by schooling their children abroad. Judging by the age-group most decision makers on this issue belong to, it is also worth noting that they themselves are probably well past their child-rearing years and have no personal stake in the effects of this policy. Taking away choices from parents and student will not magically fix the problems in our public school system.

Clearly, the authors of this particular idea have not given a single thought to the idea that today’s graduates are not just citizens of Pakistan, but global citizens and must be prepared to work anywhere. When Pakistani graduates go abroad for work, the only advantage their employers can count on is their command of the English language. Enacting these changes would effectively take away the only remaining benefit of growing up in a former British colony. This goes to show the lack of thought that has gone into the PTI’s education policy. It is also reflected in the isolated and divorced nature, the lack of details of initiatives (beyond one-sentence descriptions) and the absence of any coherent framework that could bind them together in service of a larger objective.

Another element of the initiative to unify the education system is the mainstreaming of madrassas. Faith based schools exist in other countries as well, but their curriculum still has to meet public school curriculum requirements alongside their own subjects. However, in Pakistan the vast majority of madrassas belonging to the five big madrassa boards are not just places of learning, these are also places of power and control. These same students are rallied when Khadim Rizvi, Fazl-ur-Rehman and the likes want to ‘teach the government a lesson.’ Relinquishing control by granting students choices does not work for them.

Presently, there are five different madrassa boards, one for each maslak, namely Wafaqul Madaris, Al-Arabia, Tanzeemul Madaris Pakistan, Wafaqul Madaris Al-Shia, Wafaqul Madaris Al-Salfia and Rabitaul Madaris Al Islamia. The majority of madrassas fall under these boards. On Sep 7, 2018, Maulana Haneef Jalandhri (Secretary Wafaqul Madaris Al-Arabia) issued an official statement with regard to the new government’s attempts to mainstream madrassas. The Maulana criticised the government for not including madrassa boards in conversations and for making unilateral decisions. He also said that the public school system (meaning public as well as private schools) are in equal need of reform and if madrassas are expected to reform then so should the state education system in the light of Quran and Sunnah. He rejected any unilateral reform agenda as unacceptable and a conspiracy to weaken the madrassa system.

During the 2013-2018 tenure, past governments (including PTI in KP) introduced Quranic teaching (Nazra and translation) as a compulsory subject in schools. What if Maulana Fazl-ur-Rehman demands banning concerts and cultural events etc. in schools or Haneef Jalandhri demands introducing the study of Hadith in state schools. Is that what we are bargaining for? We already saw the JUI-F’s unbending attitude when it rejected madrassa bill in Sindh because it felt that by changing the curriculum the government was wresting away control. Efforts to mainstream madrassas have been going on for years, but the unyielding attitude of their administrations is such that we have yet to see any substantive changes.

Earlier in 2016 it came to light that the KP government had allocated the Darul Uloom Haqqania a generous grant of Rs. 277 million, run by Maulana Sami-ul-Haq and infamous for counting among its alumni the Taliban’s longtime leader Mullah Muhammad Omar and others. At the time this news became public, Imran Khan himself angrily defended this action by justifying it for the purpose of "mainstreaming" and "keeping it away from radicalisation." However, as of this writing, there is no accounting of what that grant was actually spent on.

The rather hurried formation of the task force, its composition, and the last-minute participation of Mufti Muneeb through video link shows that the government is scrambling to put something together to announce, lest people start asking questions. There is an absence of solid thinking or even clarity of thought with regards to what it is trying to achieve. Apparently, at the meeting Mufti Muneeb said that madrassas are doing what they are supposed to do, i.e., graduating aalims. So, when the minister tweets that suggestions for reform were solicited from Muneeb-Ur-Rehman, we want to know what those suggestions entailed.

Obviously, it appears there is a lot of activity on the education front in the early days of this new administration. Before embarking on a major overhaul, the honourable minister and his task force ought to reflect on and answer the question as to what is it that we need to get out of our school system? We need to make up our minds about the type of citizenry we are looking to produce. Do we want aalims and jihadis, mediocre workers who can fill clerical positions or productive citizens who have the skills to thrive? Unless we answer these basic questions, we cannot reform the education system in the true sense of the word.

Given that the sheer breadth of changes being planned and proposed will touch almost every Pakistani household, it will behove this task force to open up the consultation phase by starting a public dialogue. Education is very much a public matter, and hardly an issue of national security. The challenges to the public school system could not be resolved in the last 70 years, and it is unlikely that fourteen wise men and a woman on a task force are going to be able to quietly solve them now, all by themselves.

As former Director Schools of KP Rafiq Khattak wisely put: "More than 3,000 schools have been destroyed by terrorists or for natural reasons in the past years. The government has not been able to rebuild these schools. If we have 20-some thousand primary schools in KP, at least 50 per cent are one or two-teacher schools where one teacher is teaching six subjects to six classes each. Perhaps a better thing to do will be to build these schools, equip them, and provide them teachers." Clearly, the challenges to our education sector are complex, large in scale and lie elsewhere.