Ajanta Theatre’s bracingly sentimental debut takes up the ‘perfect girl’ Asghari from Nazir Ahmad Dehlvi’s popular Urdu novel, Mirat-ul-Uroos, but not without delving into different sides of her personality 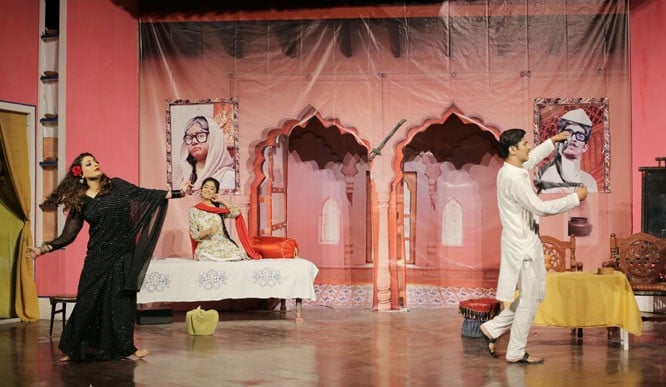 Asghari wants none of this: not the shabby yet bright (read outrageously pink) home into which she, along with her father and grandmother, have just moved, nor the unavoidable drama that comes with her being part of this eccentric family; and certainly not the insufferable ‘ghosts’ that seem to tag along with her wherever she goes.

But then, what does Asghari -- the most ‘idolised’ girl in the world of Urdu literature -- really want? That is the question posed by Ajanta theatre’s maiden play, Asghari Ke Humsaye, in which they repurpose Asghari the protagonist from (Deputy) Nazir Ahmad Dehlvi’s famous Urdu novel of early twentieth century, Mirat-ul-Uroos, that inspired an entire generation.

The amateur group’s debut theatre production, that premiered on Sunday evening and went on for three days at the Alhamra Cultural Complex auditorium, was packed with some funny and some outrightly bizarre moments that, surprisingly, received a favourable response from a zealous audience.

The play’s writer and director Raakia Raza’s ambitious take on Nazir Ahmad’s shy and compliant Asghari, is refreshingly unique, to say the least, as the play is really a study in victimhood, of the inculcated shame that tends to make women their own ‘jailers.’ Raza’s Asghari suffers from a multiple personality disorder (MPD), that eventually gives rise to four separate personalities in her, each dealing with a different ‘shortcoming’ in her life.

Soon after Asghari (played by Rubab), along with her overtly dominant father Noor Mohammad (Bilal Azeem) and the matriarch of the family, Daadi Jaan (Raakia Raza) shift to a new house, she is haunted by the many figments of her imagination. The reasons for the mental disorder that she is inflicted with -- as revealed later in the play -- are many, ranging from the untimely death of her mother, to her uneasy and submissive relationship with her father, to her suppressed desires, to the need to ‘protect’ herself. "In order to upkeep Abba jee’s honour, I had to banish Haseena, because she evoked a desire in me. I had started thinking that the mere existence of her was manhoos (ominous)," says Asghari, while explaining one of her personalities to the psychiatrist towards the end of the play, as comprehensively confused as the subject of a Victorian novel, cruelly bound by the unsaid rules of the society.

Girlish in voice and seductive in her movement, Asghari doesn’t want a marriage and a conventional life. What she wants is her childhood to come back to her, for her to be courageous, for her to be able to honour her desires while becoming the ‘perfect’ girl that her father always wanted her to be.

As the play proceeds, we meet the other characters that form an integral part of Asghari’s troubled life -- the funny yet irritating house help, Achhay Mian (Mashood), the psychiatrist (Haroon Azam) who diagnoses her illness and hence solves the mystery of her docile personality, and the entertaining pir (Amar-ul-Haq) that the family turns towards in order to perform an exorcism on her.

There were some exhilarating performances in the play, especially by Raakia Raza, and the audience’s favourite, Mashhood, who simply brought Achhay Mian to life.

I did feel that Abba jee’s character could have been toned down a bit, and that the psychiatrist, though crucial to the play, could’ve worked a bit more on his dialogue delivery so that it didn’t sound like a parliament speech.

Amongst all, Rubab shone bright as Asghari. Her portrayal of the much revered shy girl was passionately and unapologetically female. Her character suggested a woman in a state of arrested development.

Apart from some unnecessary, out-of-context jokes, and incessant overacting by some of the characters, the play was decently handled. The costumes were fittingly reminiscent of the era the play was set in (the mid-20th century), right from Dadi’s pink gharara, to Asghari’s tang pajama, and Abba jee’s rather badly sewn achkan. The amount of effort that must have been put in by Raakia Raza in developing Dadi’s Lucknavi accent did not go unnoticed as well.

The set, although simplistic, did help to impose some sense of unity, and managed to establish the overall mood of the play. A couple of oversized photographs of Asghari’s grandmother and father hung above the action, mostly evoking the fear of authority that was at the forefront of Asghari’s mind. The actors seemed well-rehearsed and completely in sync with each other’s characters. The blocking onstage seemed perfect for a production company that’s only starting. The apt use of lighting and sound made sure that maximum attention could be drawn towards significant scenes, characters, or props. The makeup -- done by a local salon -- was neither too gaudy nor ‘hardly present.

A couple of adjustments here and there would have made the production stronger and more engaging -- use of unnecessary humour and pointless dances in between, being a few. Overall, the play, in its character detail and precision plotting, was engrossing.

It seemed that the director was confused about the point she actually wanted to drive home, as the psychiatrist’s ending ‘speech’ awkwardly dwindled between shifting the blame for Asghari’s illness on her elders who forced her to suppress her desires, and on the illness itself for possessing her mind. But despite the obvious directorial glitches, Ajanta Theatre’s ambitious first play did succeed in making sense of the deep psychological issues pertaining to young girls that are prevalent in our society and are often overlooked. It certainly left me thinking for a long time.