Though ambitious, environmentalists and policy-makers say the 10 billion tree plantation target is achievable 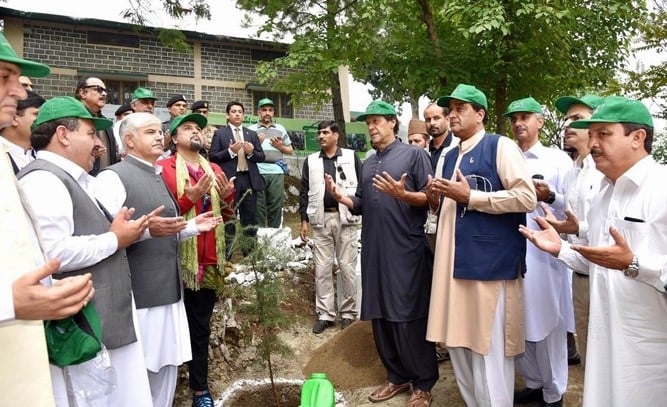 On September 02, 2018, Prime Minister Imran Khan formally launched the ‘Plant for Pakistan’ project, a green Pakistan drive ambitiously aiming to plant 10 billion trees in Pakistan over the next five years. He categorically stated that "if we don’t start planting trees now, the whole country can become a ‘desert’."

Given the fact that Pakistan’s 1.9 per cent area is covered with forests, which is the lowest in South Asia and had witnessed deforestation at a staggering rate of 2.1 per cent, the government needs to increase the forest cover on war-footing.

Malik Amin Aslam, advisor to the prime minister on climate change, informed that the mechanics of the project are "presently being worked out in consultations with the provinces and soon would roll out an implementation framework".

"We aim to have the project ready with financial outlay along with the implementable plan before the winter planting season," he said.

The initiative is well received by the environmental experts of Pakistan.

According to Neil Buhne, the United Nations (UN) Resident Coordinator and United Nations Development Programme (UNDP) Resident Representative in Pakistan, "The government’s plan to plant 10 billion trees is a brilliant idea to address the environmental issues of the country. The plan seems ambitious yet achievable provided the same spirit as demonstrated by the KP government during the Billion Trees Tsunami Afforestation Project (BTTAP) is exhibited by other provinces as well."

He went on to say, "All provincial forest departments working in various forests, rangelands and agricultural ecosystems using different approaches and techniques will enhance the success rate of the project."

Neil further said that the project’s success rate can be further enhanced if other government organisations, academia, CSOs, NGOs, corporate sector and general public are engaged throughout the process; alternative options are provided to the local communities for fuel wood, fodder and other purposes; sensitising the communities and local governments regarding the economic and environmental significance of forestry; long-term sustainability of the plantations; plantation of indigenous species and prudent monitoring and evaluation to ensure transparency.

He further said, "As the Groasis Waterboxx consumes 80 per cent less water, it should be first imported from Netherlands and then Pakistan should produce it indigenously. Currently, 70-80 countries are using this technique to green their dry zones and since Balochistan’s 60-70 per cent area is arid and hyper arid, this technology is highly feasible."

"10 billion trees is a big target for which big patches of land have to be identified. In my opinion, Balochistan has to be the centerpiece of the project with at least four billion trees across the province and two billion mangroves on the coast," informed Tariq Zehri.

He went on to say, "South Punjab, interior Sindh and several districts of Balochistan including Lasbela, Turbat, Kharan, Awaran, Washuk, Noshki, Chaghi and Kalat are witnessing extreme heat and plantation in these areas can be an uphill task." Whereas in saline and water logged areas, Tariq Zehri suggested planting Eucalyptus as a remedy.

When asked where irrigated plantations can be done, Zehri informed it can be carried out in Naseerabad and Jafarabad which receive the Indus water. "Also plantations should be done alongside all the canals in the province. Plantations can be successful in Zhob, Sherani, Musa Khel, Lora Lai, Barkhan, Chaman, Gulistan, Pishin, Quetta and Qila Saifullah districts."

Zehri cited the example of a private entrepreneur in Khuzdar who has agreed to plant trees on two million acres of land, signaling that people have begun to own the initiative. "People from 25 districts of Balochistan have pledged to dedicate their land for forestry and subsequently conserve it in years to come," added Zehri.

For the cities of Ziarat and Harnai which host Juniper forests but receive insufficient rainfall to support the growth of forests, Zehri suggested to seek the support of aviation for water sorties over these forest areas during the plantation season to support their growth.

When asked regarding the choice of species as part of the project, Tariq Zehri informed that only native tree species will be planted, such as Gazin Makran, Shinay and Morus in Pishin and Qilla Abdullah, pine in Quetta and mangroves in the coastal belt especially in Kalimat Horr, Miani Horr and Gwatar Bay.

"Plantation on China-Pakistan Economic Corridor (CPEC) should be aligned with the PM’s Green Pakistan Programme (GPP). The projected vehicular emissions due to CPEC and railway emissions underscore the need to have 3-5 lane avenue plantations of native trees which should be either linear or block plantations depending on circumstances," says Tariq Zehri.

Regarding the possible threats to mangrove plantations, Abdul Rahim identified camel grazing as the major threat and suggested rotational grazing to deal with it.

"The benefits of mangroves are innumerable as they are excellent carbon sinks, boost fisheries, control coastal erosion and reduce the intensity of storm surges," added Rahim, urging the government to increase the numbers of mangroves in the campaign.

For Hammad Naqi Khan, CEO World Wide Fund for Nature-Pakistan (WWF-Pakistan), the plantation of 10 billion trees is an ambitious plan and that the federal and provincial governments should take the initiative holistically. He was hopeful that the government’s rich experience of planting a billion trees in KPK would help them achieve this target as well. "It will be a mix of different approaches which includes afforestation, regeneration and plantations in degraded forests etc."

"Obviously, the government won’t be planting invasive species, as they are well sensitised to promote indigenous ones," Hammad said.

Hammad also suggested linear plantations alongside canals, as Pakistan has the largest irrigation system in the world.

Regarding species selection, Hammad suggested the policy-makers to be selective in choosing tree species which must favour the local environment, given the arid and semi-arid conditions across the country.

"Community ownership can help as plantations would also be made on private land, which can sensitise communities to protect trees for future generations. The project can help these local communities to grow trees on sustainable basis, which can let them consider trees as cash crops, bringing a real change in the agriculture system."

Regarding how private sector can take ownership of the initiative, Hammad made special reference to South Punjab Forest Company (SPFC) and said, "In South Punjab, SPFC’s Public Private Partnership (PPP) model can help, as the investors can grow trees on sustainable basis and periodically harvest them, thus adding to the economy and ecology."

Hammad however cautioned that market forces can change the dynamics of the 10 billion plantation drive and may lead to plantation of invasive species especially Conocarpus.

Tahir Rasheed, the CEO of South Punjab Forest Company (SPFC), termed the initiative a welcome move, as it will "help restore the dwindling forest cover of Pakistan which is currently the lowest in South Asia. However, extra care should be taken while choosing blank forest areas, as they should be appropriate to support new plantations."

With reference to Punjab, Tahir Rasheed added that the project offers a golden opportunity to plant one billion trees in Punjab, which can help combat desertification, conserve wildlife and adapt and mitigate climate change.

"South Punjab Forest Company’s approach of engaging the private sector to invest in trees for sustainable harvesting would also complement the PM’s vision, as up to 100 per cent of SPFC’s share would comprise indigenous tree species which would be conserved during the project duration and add to the forest cover of Punjab. SPFC’s initiative will lead to afforestation of 40 million trees, carbon sequestration of 35 million tons and creation of 15,000 green jobs," concluded Tahir.

Muhammad Tehmasip, Project Director KP, said this time in KP two billion trees will be planted as Fata is also part of the province. He further informed that this time up to 60 per cent plantations would be done on government land and 40 per cent on communal land.

Mome Saleem, Programme Coordinator, Heinrich Boll Stiftung (HBS), who also heads a community initiative Reclaiming Green Islamabad (RGI) that aims to conserve the environmental resources of Islamabad, appreciated the government’s decision to plant native species through the project. "Indigenous trees would prevent the exhaustion of groundwater table and won’t damage other trees in the area." Regarding the urban areas, Mome called for protecting the seed banks by declaring the green zones as protected.

She went on to say, "Urban spaces are devoid of environmental ownership hence the destruction happens faster. Urban forest is a different ball game hence it would require citizens to realise the importance of not only tree plantation but the ecosystem that gives rise to water security, food security, resource equity and conservation of flora and fauna."

The environmentalists and policy-makers have endorsed the 10 billion tree plantation drive and hoped "#Plant4Pakistan" will be a success story. The target is achievable and that only native trees shall be planted but site selection, nurseries establishment, plantation strategies, water availability and financial aspects are some dimensions that demand thorough deliberation. The forest officials must not hurry and panic in achieving the numbers but work under technical guidance to make the project a success.