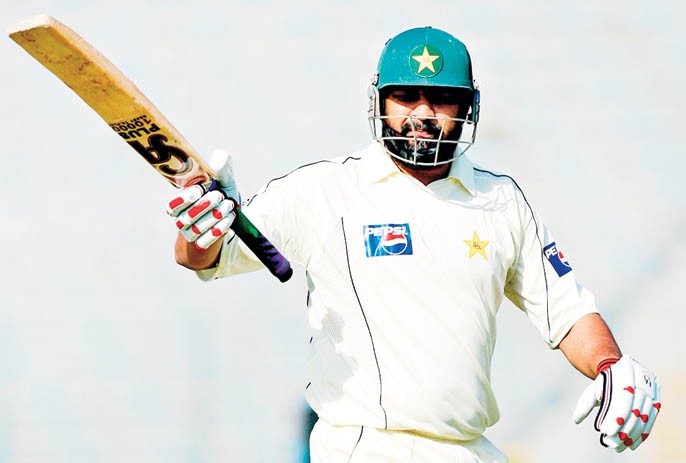 Bowling has always been Pakistan’s strength and batting mostly the weakness. Most of Pakistan’s wins occur when we have batted first. Our bowlers have much stronger nerves than do our batsmen. Chasing even a small total is a tough task for our batsmen.

In the third Test against South Africa at Faisalabad, Pakistan were set a target of just 146. And we couldn’t even manage 100. Shot out for just 92. Moin Khan and Aamer Sohail were the only ones to manage double figures.

In the first week of 2010, Pakistan, under the leadership of Muhammad Yousuf were the favourites to win the second Test against Australia at Sydney. Pakistan had dominated most of the sessions. We needed only 176 to win. And the team was bundled out for just 139.

Nonetheless, there have been occasions when our batsmen did manage to chase down targets which seemed too difficult.

At National Stadium, Karachi, Mark Taylor led Australia set Pakistan 314 to win. Shane Warne had recently become a star. Few batsmen around the world had been able to withstand his art of legspin.

Pakistan lost their sixth wicket (Wasim Akram) at 179, seventh at 184 (Basit Ali), eighth (Rashid Latif) at 236, and the ninth (Waqar Younis) at 258. It seemed almost impossible that Pakistan could keep their record of being unbeaten at Karachi in Test cricket intact.

But 24-year-old Inzamam-ul-Haq was not willing to give up. And so was Mushtaq Ahmad, Pakistan’s No 11. Defying all the odds, half-fit Inzamam scored 58 and Mushtaq 20 to take the team to take the team to an incredible victory. (Pakistan’s first loss at National Stadium came six years later when Nasser Hossein-led England beat them.)

In the third ODI at Nottingham, Pakistan were set a target of 247 by England who had already won the series. Pakistan were given a solid opening stand of 93 by Saeed and Shahid Anwar (the latter played was playing his first -- and unfortunately the last -- international match).

Pakistan suffered a familiar collapse, losing their third wicket at 177 (Aamer Sohail) and the seventh (Ijaz Ahmed) at 219. They fell like nine pins to gentle medium pace of Adam Hollioake.

But wicketkeeper Rashid Latif played a gritty knock of 31 off 28 deliveries, helping Pakistan achieve the target off the fourth ball of the last over.

In January 2014 at Sharjah, Sri Lanka set Pakistan a target of 302 runs with only two sessions of the last day left. But Pakistan were determined to reach the target. In trying to score rapidly, openers Khurram Manzoor and Ahmed Shehzad fell after making 21 each. At 97, Younis Khan also departed. It looked Pakistan would now go for a draw. But skipper Misbah-ul-Haq thought otherwise. He promoted wicketkeeper batsman Sarfraz Ahmad to number five. Sarfraz did his job splendidly. He took it as an ODI. He scored 48 off just 46 balls, striking four fours and a six. Azhar Ali at the other end was slower but steady. When Sarfraz got out, Pakistan had reached 186. Victor still looked unlikely. But Misbah and Azhar kept the run rate over five, taking very calculated risks. When Azhar departed after making 103 runs, Pakistan were only seven runs away from victory. Misbah took the team to the target, remaining not out at 68.