We were once ahead of the Indians in sports. Today, however, we lag far behind because of lack of planning 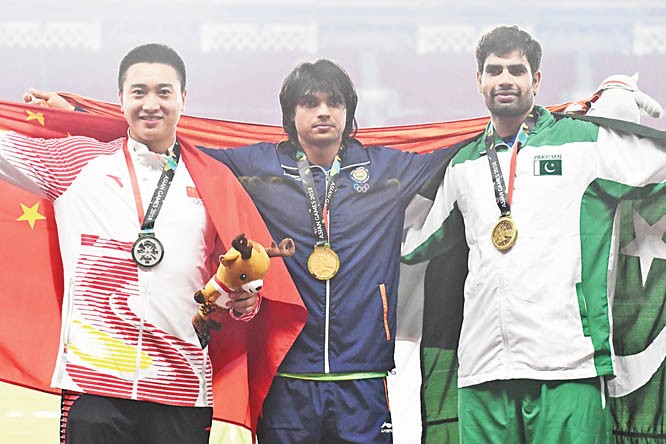 This reveals the sad story of Pakistan’s sports development path, whereas the gradual improvement of medal tallies in the neighbours’ camp is the evidence of better sports policies and initiatives taken by the Ministry of Youth Affairs and Sports (MYAS) in India, which is the body primarily responsible for funding the management and development of sports infrastructure and formulating sports development programmes.

Both India and Pakistan inherited their sports systems from Britain who introduced many new sports in the education institutions and armed forces.

Pakistan were No 6 with 12 medals, including four gold, in 1990 Asian Games in China. India were No 11 with only one gold.  By 1998, India were No 9 with seven gold medals while Pakistan slipped to No 16 with two gold medals only.

IOA or Indian Olympic Association is an autonomous body that enforces Olympic charter and organises Games and liaises with government for financial assistance.

India sent a large contingent of more than a 100 sportspersons to Rio Olympics in 2016, but won only one silver medal, in badminton, and one bronze, in wrestling. The Indian authorities realised that sports was not a matter of chance and luck but a serious effort was required for developing sports.

Research revealed that without making sports an integral part of school curriculum, developing infrastructure, and offering career opportunities to sportsmen and women in urban and rural areas, sports culture cannot be nurtured.

The Indian government also realised there was a lack of accountability, limited involvement of the private sector, lack of talent development at the grassroots and that local sports events lacked profitability.

The Indian government accorded sports the status of industry in February 2016, so that it could attract investments from private sector. Though cricket continuous to dominate Indian sports as in Pakistan, advertisers, broadcasters and viewers started gaining interest in such sports as kabbadi, football, badminton and boxing because of sufficient increase in the standard, presentation and packaging of these games by respective federations.

In July 2016, the Supreme Court of India took a significant step towards improving sports governance by accepting recommendations of the Lodha Committee on BCCI’s governance. These included a bar on appointment of civil servants and ministers in the country’s apex body of cricket.

The Indian government created Sports Authority of India (SAI). In my article "The Sports Narrative of Pakistan" dated August 12, 2018, I suggested the establishment of a similar body for the betterment of sports affairs in Pakistan by the name of National Sports Council (NSC).

The SAI has nine regional centres through which sports promotion schemes are managed at various SAI training centers (STCs) in India.

The SAI entered MoUs with different stakeholders. It established Gopichand National Badminton Academy. The SAI has also signed an MoU with the International Association of Athletics Federation of India to develop a high performance academy at the Jawaharlal Nehru Stadium.

To ensure effective scouting and training, right from grassroots, the Ministry of Youth and Sports Affairs (MYAS) announced the "Khelo India Scheme" from 2016-17.

The scheme is a combination of Rajiv Gandhi Khel Abhiyan Scheme which aims to provide funds for infrastructure development and to execute sports talent search.

In the eleventh five-year plan, the Government of India increased the funding for sports industry to 4600 crore Indian Rupees.

Naya Raipur Development Authority in India is building a sports city in Naya Raipur which will have facilities of tennis, aquatics and an indoor stadium.

Jindal Steel Works (JSW) has collaborated with SAI as part of its CSR initiative to oversee the upgrading and maintenance of infrastructure at SAI’s regional training centre in Hisar.

The Indian government is also partnering with foreign governments to enable transfer of knowledge of modern sports at colleges, universities and training centres.

The gestation period for realising returns on such investments may be long, but the Indian performance at Asian Games in Jakarta is clear evidence that the sleeping giant is now awaking.

It goes without saying that success is where preparation meets opportunity. While the Indians are taking large strides, Pakistan sports continue to face charges of impropriety, malpractices and nonprofessional approach. If we fail to learn from the developments taking place in our neighbourhood, the day is not far when the few medals won due to individual brilliance will also elude us.