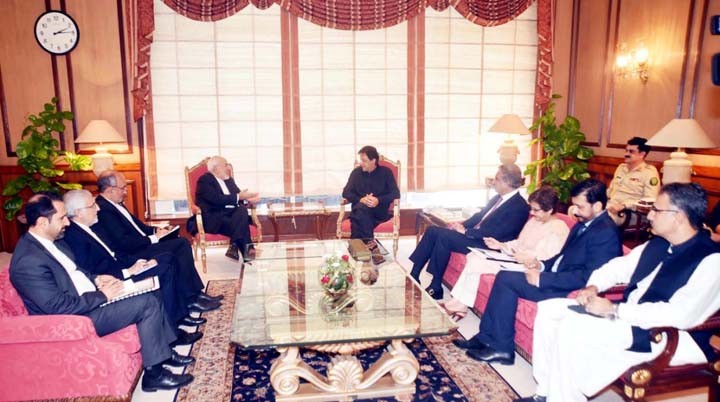 Pakistan’s assurance of support to Iran in its row with the US on the nuclear deal during Iranian Foreign Minister Mohammad Javad Zarif’s recent visit to meet Prime Minister Imran Khan is being noticed both at home and abroad.

At home, people wonder what the support indicates for the future of Pak-Iran relations at a time when our country seems to be slipping into greater Saudi influence. Is it a balancing act between Saudi Arabia and Iran? Or does it denote some reduction in Riyadh’s influence? Those who are attempting to gauge the relationship are using the religious-ideological lens.

The only framework that could be applied to this situation is a short-to-medium term political adjustment necessitated by a realistic assessment of the challenges facing Pakistan where it has shared experience with Iran.

The promise to Javed Zarif is akin to the adage, ‘not out of love for Ali but to spite Ma’awiya’ (referring to the historic rivalry between the 4th Caliph Ali and his political rival Ameer Maawiya), describes the situation best. The two neighbours have come together not to join hands as friends but to create an impression of geo-political unison -- to ward off pressure from the US against their respective nuclear programmes and its military ambitions in the Middle East and South Asia. The assurance looks like an effort to cobble together an informal bloc under the Chinese and Russian umbrella.

This is a tactical move in which chances for a long-term engagement seem limited. It will certainly not turn Pakistan away from playing a role in the Saudi security architecture that poses as a contradiction to major growth in Iran-Pakistan relations. Chances are that the newly arrived civilian leadership didn’t have much to do in designing the meeting.

The idea of increasing people-to-people contact or increasing trade between the two countries is a non-starter. The fear of US sanctions mixed with geo-political suspicion has not allowed Pak-Iran bilateral trade to grow for over two decades now. Pakistani banks cannot issue letter-of-credit (LC) to businessmen for trading with Iran.

During my research on Pakistan’s trade with Afghanistan, India and Iran, I found out from the business community that the banking limitations have made smuggling a major source of economic interaction. With Pakistan struggling economically, the situation may remain unchanged for a while. What Islamabad could do, however, is develop an infrastructure on its side of the border. At present the facility is shoddy and hardly helps visitors entering or exiting Pakistan. Even toilets are hard to find on the roads from Balochistan up to the Iranian border. Iran offers much better facilities to the visitors.

The people-to-people contact suffers mainly due to suspicion over extremism within the security establishments on both sides. These are lingering socio-political issues that may not resolve in a day. The sectarian tensions continue to simmer as dangerous propaganda by sectarian groups thrives in society.

The promise to Javed Zarif is akin to the adage, ‘not out of love for Ali but to spite Ma’awiya’. The two neighbours have come together not to join hands as friends but to create an impression of geo-political unison.

The key to improved relations however lies with the GHQ that started to take initiative to rebuild bilateral links after former Army Chief Raheel Sharif’s spat with visiting Iranian President Hassan Rouhani in 2016 over the Kulbhushan Jadev case. Later, Pakistan joined the coalition of 39-Sunni Muslim states initiated by Saudi Arabia, with Sharif as its head despite Iran’s concerns,

While Pakistan’s parliament played a critical role by passing a resolution in 2015 to limit Pakistan military’s role in the Saudi-Yemen war, the country’s military needed to make extra effort to balance relations between the two countries - hence General Qamar Bajwa made a visit to Iran in November 2017 with a message that Pakistan’s role in Saudi-led activities would not affect relations with Iran.

Currently, Pakistan is Saudi Arabia’s mainstay -- in providing it security and fulfilling its geo-political ambitions. Also, the relations are easier to keep compared with Iran, as both Islamabad and Rawalpindi can build their activities around the key personality of Prince Muhammad bin Salman.

However, the 2017 Bajwa visit to Tehran was an opportunity for Iran to discuss concerns regarding threats to the nuclear programmes of the two neighbours. Though the US sanctions against Pakistan are limited and of an entirely different nature, Iran may have played up the threat of the US targeting Pakistan’s nuclear weapons.

Clearly, till late 1990s, Pakistan’s security sector was on the learning path of benefits and limitations of nuclear deterrence. Indeed the (late) General Hamid Gul had spoken about a meeting at Joint Chiefs Headquarters in 1992 where Pakistan Air Force had expressed frustration that the nuclear programme was blocking the possibility of procuring American fighter aircrafts and other major weapon systems.

According to Wikileaks, in 2004, Pervez Musharraf, known for his closeness with the US, had tried to dissuade Iranians from pursuing nuclear ambitions.

Iranian support to the Syrian regime or the Houthis in Yemen or organisations like Hamas and Hezbollah not only creates a role for Russia in the Middle East, thus limiting American influence, but also acts as a barrier against Israel and the US jointly putting an end to the Palestinian issue. The US shifting the embassy to Jerusalem is probably part of a plan to end conflict in the Middle East in which Palestinians get, what looks like, the only available but a raw deal.

At a time when most Arab states would be happy to turn a blind eye to the Palestinian issue, Iran seems to be the only Muslim country covertly challenging Israel’s dominance over the Palestinians.

In a world greatly absorbed by its security and economic issues, the human rights of Palestinians run the risk of being ignored as much as the Kashmiris. Iran seems to have worked on Pakistan’s concern for the future of the Kashmir issue by bringing the matter into the discussion. It was after the meeting between Zarif and Khan that Foreign Minister Qureshi thanked Iran’s supreme leader Ayatollah Khamenei for his "strong and unswerving support for the just struggle of the people of Kashmir".

From the Trump’s lens, both Iran and Pakistan play a significant role in their respective regions -- which is what seems to have brought Tehran and Islamabad together. While Iran is a leader of the Shia Islamic world and a significant player in the Middle East, Pakistan hopes to carve a leadership role in South Asia and the Sunni Muslim world with assistance from China and Russia.

Though their paths are not likely to meet and the two countries will keep challenging each other in future, as in Afghanistan during the 1990s and 2000s, Iran and Pakistan will use the moment to gain their tactical benefits.

The author is research associate at SOAS, University of London, South Asia Institute and can be reached at www.drayeshasiddiqa.com