In his new book, eminent critic and researcher Dr Iqbal Afaqi discusses ideas about aesthetics that are commonly out of bounds for an Urdu reader 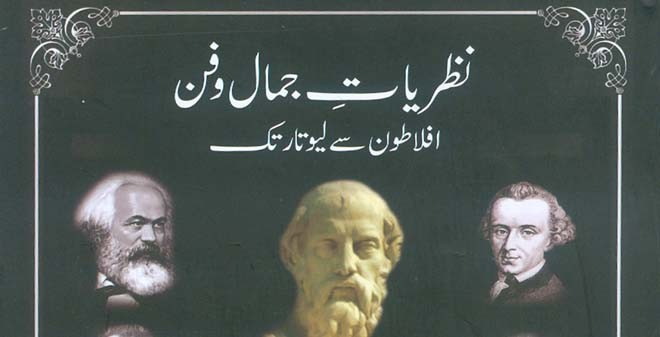 When Dr Qasim Bhugio was the chairman of the Academy of Letters, he initiated the publication of books that did not strictly fall under the category of literature. The book under review is one such publication. What Dr Iqbal Afaqi has written is a treasure trove of concepts and ideas about aesthetics and art that are commonly out of bounds for a general Urdu reader. An eminent critic and researcher, Dr Iqbal Afaqi at once straddles multiple fields such as philosophy, criticism, mysticism, civilisations, and comparative religions. The book under review is definitely an invaluable addition to the otherwise meagre literature we have about aesthetics in Urdu.

The only other Urdu book on aesthetics that I have in my collection was written by Mian Muhammad Shareef, former president of Pakistan Philosophical Society and pro-vice chancellor of Aligarh Muslim University. Shareef’s book, Three Theories of Aesthetics, was a selection and translation of the English lectures that he had delivered in 1943 in the universities of Punjab, Delhi, and Allahabad. If you compare Shareef’s book with Dr Afaqi’s, you see a much more detailed and comprehensive coverage of ideas in the latter. Shareef’s three lectures covered Aristotle and Croce with one chapter on the question: whether beauty is objective or subjective.

Theories of Aesthetics and Art covered almost all major thinkers who have written on the topics of art and literature, such as Marx, Croce, Collingwood, Adorno, and Lyotard. Keeping in mind the difficulty of this subject matter, Dr Afaqi starts with the definition of aesthetics and defines it as a field of study that talks about the origin, value, and judgement of beauty. Moreover, it also covers the development of taste and the ability to derive pleasure from the appreciation of art and beauty.

He highlights the fact that Plato’s Republic is primarily about politics but it does talk about the philosophy of aesthetics and art. Initially, Plato was under the shadow of his teacher Socrates, then gradually developed his own ideas about art, dance, music, drama, and architecture. In Hippias Major (or What is beauty?), Plato delves in detail about aesthetics. It is an early dialogue of Plato in which Socrates and Hippias (a sophist) set out to find the definition of beauty.

Aristotle was perhaps the first philosopher who dealt with not only philosophy and science but also pondered over questions of art and poetry, and provided sound footing for appreciation of poetics and value judgement of arts. Aristotle borrowed the idea of representation from Plato’s concepts of mimesis (imitation) but transformed it into a wholly new idea. Aristotle did not agree with his teacher Plato that art is an imitation of an earlier imitation (replica of a replica).

The chapter on Kant tries to simplify his difficult discourse so that it becomes accessible to common readers. Kant has a particular relevance in philosophical discussions on modernism and post-modernism. This 18th century philosopher dominated most part of the century with his critiques of judgement and pure reason. He is reported to have spent almost 15 years on his treatise, The Critique of Pure Reason, in which he postulated that reason could only be applied to physical phenomena and all talk about metaphysics was beyond reason. This observation is very relevant today, especially in countries such as Pakistan where metaphysics rules the roost.

Dr Afaqi’s chapter on aesthetics of Hegel is a treat in itself. After Ashfaq Saleem Mirza, Dr Afaqi is arguably the only Urdu writer whose grasp of Hegel is so impressive. Hegel took the torch from Kant in the early 19th century and enlightened the philosophical firmament with his Idealism that many philosophers considered as the pinnacle of German Idealism. Hegel was one of those philosophers who become influential within their lifetime and overshadow many generations of thinkers to come. Hegel, indeed a difficult writer to read and understand in any language, has been explained very well in Urdu by Dr Afaqi.

Though Karl Marx has not written much exclusively on aesthetics, Dr Afaqi devotes an entire chapter to him. Initially, Marx was highly impressed by Hegel, particularly by his discussions on classical Greek art. Greek tragedy was an area of specific interest for both Hegel and Marx. Marxist aesthetics was later developed mostly in the 20th century by his followers who wrote extensively on literary theory, realism, and revolutionary criticism. As Marx had confined himself mostly to questions of possibility for creating a new economic system, his focus revolved around how people lived in real social settings; this to him was a primary question in human history.

The first half of the 20th century saw two great thinkers on aesthetics: Croce and Collingwood. Croce was an Italian idealist philosopher who lived a long life of 86 years (1866 - 1952), whereas Collingwood was an English archeologist and historian who died at the age of 54 (1889-1943). Afaqi devotes two separate chapters on the two writers who have greatly influenced our thinking on aesthetics in the past hundred years or so. Like Marx, Croce was also impressed by Hegel’s ideas and wrote, What is living and what is dead in the philosophy of Hegel in 1907.

Croce, though influential in his lifetime, was later neglected in favour of Collingwood. Croce’s philosophical ideas were, in a way, continuation of the 19th century idealist thought that lost its relevance in the second half of the 20th century. Collingwood was also an idealist to some extent, as he borrowed his initial ideas on aesthetics from Croce, but later became a standard bearer of expressionism.

For future editions of this book, it would be convenient if the English terms are mentioned along with their Urdu translations.