The forgotten world of Zweig 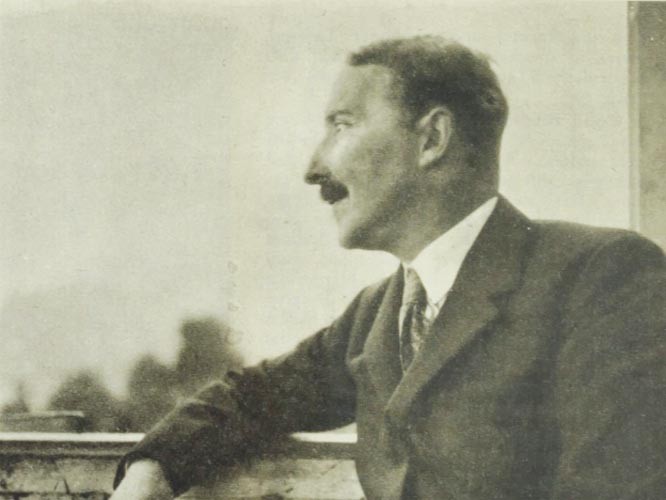 Stefan Zweig, an Austrian writer who was at the height of his literary career in between the two world wars, is making something of a comeback after years of neglect. His revival is owed to his once popular books finding their way back into print; there is a flurry of films about his life and art as well. Zweig was born in 1881 to an industrialist father. His silver spoon birth freed him from money worries, leaving him ample time to nurture his literary ambition and carefully plan his literary stardom through meticulous husbanding of his contacts in the literary and publishing world.

Among his friends were Yeats, James Joyce, Rainer Maria Rilke, Joseph Roth and Romain Rolland. Stefan began writing at an early age. He was an avid traveller around Europe. His itchy footed wanderings fostered the impression of a man on the move, living out of his suitcases. This wanderlust and the resulting international writerly brotherhoods were to leave a deep mark on his life and work. In his celebrated work The World of Yesterday (1942), Zweig writes, "my life was still governed in some odd way by the idea that everything was only temporary".

His first poem was published in a literary journal edited by Theodore Herzel, the founder of the Zionist movement. Zweig was deeply shaped by the First World War which he saw as a rebuff to the ideals of high European civilisation that he ardently lived, inhaled, shaped and loved. The bitter disillusionment sired by the collapse of the noble ideas of the European civilisation in the wake of the First World War generated his first anti-war play based on the life of Jeremiah. The experience turned him into a life pacifist and an enemy of nationalisms.

In time, he became known for his novellas whose "pared-down format and tightly managed sensationalism and dramatic turning point suited Zweig’s sensibility". For example in The Burning Secret (1913), Zweig focuses on the inability of a young boy to understand that a man, using the ruse of befriending him at a holiday resort, was actually seeking to approach his mother romantically. The boy reacts to the frustrating designs of the man. The novella creates an atmosphere of suspense by evoking the mental confusion of the boy and his vengeful actions.

His other novella creates similarly dramatic turning points and sensationalism. In Pakistan, the historian K.K. Aziz did much to promote Zweig’s novella The Letter from an Unknown Woman (1922), and would pass the novella around amongst his friends. He also supplied a thoughtful introduction to the novella’s Pakistani edition. It focuses on the life of a dying woman, writing from her death bed, to her first love: an author who she had met only twice in her life. The author receives a letter on his forty-first birthday. He doesn’t know the sender, but still the letter concerns him intimately. It is the story of a life lived in service to an unannounced, unnoticed love.

Zweig’s novellas brought him fame across the English-speaking world through translations. In the wake of fame also came money which he used to support struggling writers such as Joseph Roth. Between the two world wars he was the most translated German writers of his time. His novellas adapted well to the Hollywood film formula.

Famous philosopher, Hannah Arendt, while reviewing Zweig’s celebrated The World of Yesterday, wrote that he "continued to boast of his apolitical point of view which contributed to the rise of Hitler".

Most of his novellas were turned into films. Zweig’s life, times and literary career are filled with displacement, traumas of world wars, the widespread anti-Semitism then raging in Europe, and a nostalgia for the vanished European and Viennese civilisations that existed before the first and the second world wars.

His first dislocation to London, in 1934, was caused by the rise of Nazism in Austria as a spillover from Germany. This inaugurated themes of migration, displacement and exile in his works. He met scores of East European Jews in London whom he describes as "ghosts" amid the "pitiful ruins of their lives". His description of refugees and migrants resonates even to this day: "They had climbed over the . . . mountains by night, or swum the river marking the border. Starving, ragged and distressed, they stared at us, and with them a panic flight from inhumanity had begun. Refugees were to spread over the whole earth …"

After obtaining his British passport, he moved to America with his second wife in 1940, where he was in great demand as an eminent German exiled writer. However, he stayed away from politics during much of his stay in the US. Years later, famous philosopher, Hannah Arendt, while reviewing Zweig’s celebrated The World of Yesterday, wrote that he "continued to boast of his apolitical point of view which contributed to the rise of Hitler".

His most celebrated work The World of Yesterday is composed in elegiac tone for a vanished world of high Viennese culture and the civilised and artistic Europe of pre world wars. The rise of nationalism and the two wars had put paid to this ideal Europe; however, Zweig remained wedded to this lost world throughout his wandering life. In this respect he is one of the nostalgics of the high point of Viennese and broader Europe culture.

The last stopover in his long unhappy exilic life was in Brazil where he moved after he grew disenchanted with the US. Yet, peace of mind and restful exile eluded him. He always felt the hand of an impending catastrophe on his shoulders. Though he wrote a book on Brazil, he did not feel comfortable in the new country; always harking back to the vanished world of high European culture under mortal threat from the rise of fascism in Europe. That was tantamount to the end of the world to him. In 1942 he committed suicide with his wife in Brazil. The New York Times headlined his passing away on its front page.

The forgotten world of Zweig