Uri Avnery died exposing the corruption, the discrimination, and the violations of human rights by the Israeli state 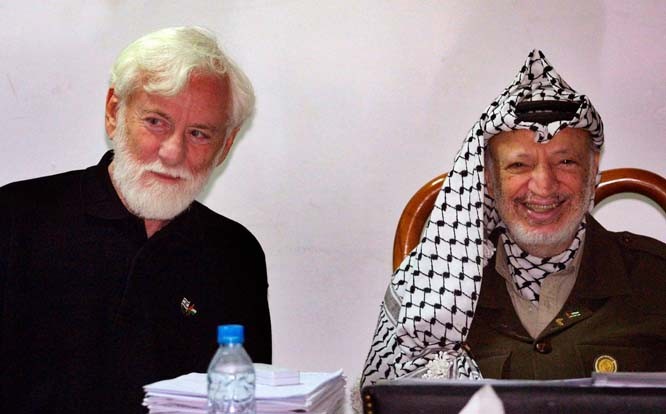 If there are any blessed people anywhere in the world, they must be the ones who challenge their own state’s narrative, raise their voices against the atrocities of their own people, and fight for those whom the majority in society is persecuting and suppressing. One such indomitable crusader, Uri Avnery, died at the age of 95 in Israel on August 20, 2018. His long life was spent mostly in exposing the corruption, the discrimination, and the violations of human rights that the Israeli state imposed and perpetrated on the non-Jewish population of his country.

Just like Yossi Sarid who died in 2015 (please see my article published on December 20, 2015, Yossi Sarid: a critic of peace) Uri was also an activist, journalist, politician, and writer, all in one. The best part about such multidisciplinary geniuses is that most of them keep themselves active and busy till their last days. More than Uri’s life story, his articles show his personality well. For example, his last article published just two weeks before his death on August 4, 2018 was titled, Who the hell are we?

Uri had a peculiar style of beginning his articles. He started with a conversation he had years ago with Ariel Sharon, a former prime minister of Israel. Uri says he was first an Israeli and then a Jew; to which Sharon retorts, "I am first a Jew and then an Israeli". Uri beautifully uses this seemingly innocuous exchange to highlight the basic difference between citizenship of a country and the religious affiliation one may or may not have. In addition to countries such as India and Israel, you apply this to Pakistan and see what happens when the two concepts of citizenship and religion are mixed.

Uri calls it ‘the heart of our basic problems’ and ‘the core of the crisis which is rending Israel apart’. You may replace Israel with any other country where religion is used for political purposes by the rulers or by the myriad groups that thrive on religious and sectarian hatred. Uri wrote his last article in response to the law that was adopted by the rightest Knesset (Israeli parliament). The law was entitled, ‘Basic law: Israel the Nation State of the Jewish People’. Interestingly, when Israel was founded during the war of 1948, it did not adopt a constitution.

The problem was almost the same as we faced in Pakistan: there were too many orthodox religious groups, which made an agreed formula impossible. In Pakistan, the state introduced the Objectives Resolution, and in Israel David Ben-Gurion read out a ‘Declaration of Independence’, which announced the founding of ‘the Jewish State, namely the State of Israel’. Just like the Objectives Resolution in Pakistan, that declaration did not become law, and it had no legal basis. But then, as it happened in Pakistan years later, General Ziaul Haq made the Resolution an integral part of the constitution; now the State of Israel has been declared a Jewish state with a binding law.

Uri highlights in his last article that the new law contains two important omissions: ‘the declaration spoke of a Jewish and Democratic State and promised full equality between all its citizens, without regard to religion, ethnicity or sex’. Whereas in the new binding law, all this has disappeared: ‘No Democracy. No equality. A state of Jews, for the Jews, by the Jews.’ This is pretty much what we have done in Pakistan. Though, on paper we may show some equality clause somewhere, in practice we are trying to make Pakistan a state of Muslims, for the Muslims, by the Muslims. And the situation is not much different in most other Muslim countries including Iran and Saudi Arabia.

In his penultimate article, published on July 28, 2018, Uri was scathing against his prime minister, Binyamin Netanyahu. Uri calls him, "a perfect diplomat, a clever politician, a talented leader of the army; and lately, another jewel has been added to his crown: he is also a gifted story-teller". In this article titled Adolf and Amin, Uri exposes Netanyahu as a liar who concocts stories to malign Muslims and curry favour with the Jewish right. Recently, Netanyahu has narrated a story in which he blamed a meeting between Mufti Aminul Hosseini and Adolf Hitler for the holocaust.

Uri clarifies that there is no evidence that Mufti Amin ever asked or encouraged Hitler to exterminate Jews. In many countries, the rulers try to develop a narrative in which an ‘other’ group is targeted to be the root cause of most problems. In Israel, the state itself has propagated falsehoods and cock-and-bull stories against Muslims and other Palestinians, including Christian Palestinians. The situation is no different in India and Pakistan, where Pakistan led the way in narrating to its children one-sided stories against non-Muslims and the so-called infidels or Kuffar. Now India is also following in the same path led by the BJP.

But the difference is that in Israel, they have had many dissenters such as Yossi Sarid and Uri Avnery, but in India and Pakistan there are not many who can challenge the nonsense being propagated at the state level. In another daring article titled the Most Successful Terrorist of the 20th Century’, posted by Uri in July, 2012, on Counterpunch website, he exposes Yitzhak Shamir. Shamir was a two-time former prime minister of Israel and a speaker of Knesset for three years. When he died in June 2012, Uri was neither diplomatic not reserved in his opinion about Shamir.

When Uri called him ‘the most successful terrorist of the 20th century’ the so-called patriots in Israel raised their eyebrows and reminded Uri that Shamir had done great services to the state of Israel. But Uri was unwavering in his stance and no nationalistic and patriotic ruse could forestall his attacks. According to Uri, Shamir was a liar and used to say, ‘It is permissible to lie for the fatherland’; Uri had serious issues with this approach because this is one of the pillars on which an exploitative state is usually based.

Now compare this with India and Pakistan where we have had the likes of Indira Gandhi, Vajpayee, and Modi, and the four military dictators in Pakistan who all were responsible for heinous crimes directly or indirectly, but here not many could call a spade a spade. When we talk or write about our former civilian and military leaders including generals, judges, and politicians, we don’t have the courage that Uri Avnery had. We hide behind the cloak of ‘national security’ and ‘institutional respect’; but, Uri had no such sugarcoating while challenging his own state and its leaders.

Needless to say, Shamir was the mentor of Netanyahu who followed in his footsteps by lying, deceiving, erecting settlements on occupied lands from Palestinians; and Uri exposed it all. Uri was one of the most articulate advocates of cooperation with Palestinians and the creation of Palestinian state. When he was a member of the Israeli parliament, he courted major controversy by crossing into Beirut during the Israeli invasion of Lebanon in 1982 and meeting Yasser Arafat, the leader of PLO. In the 1990s, Uri formed a Peace Coalition which became the first Israeli organisation to campaign for a boycott of goods produced in the West Bank Jewish settlements.

Throughout his long life, Uri remained a determined secularist and peacenik in the face of bitter opposition from the right and orthodox religious parties. He was physically assaulted many times and assassination attempts were made at him but he stood fast. Salute to you Uri, you were one of a kind.