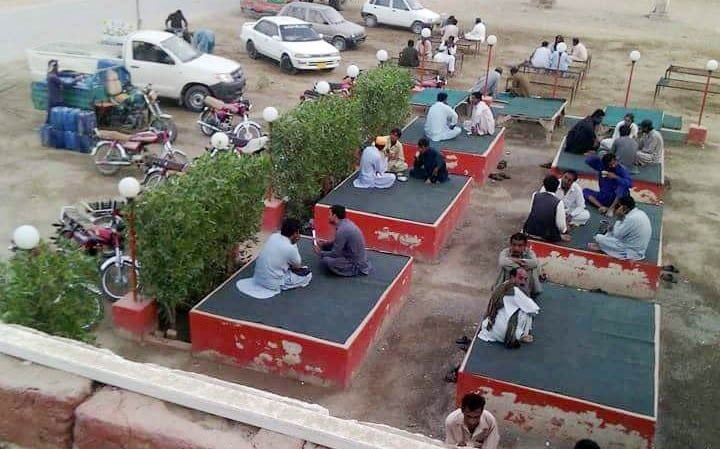 The journey to Naseerabad division of Balochistan begins from Bolan Road at the southern end of Quetta city. This is a narrow single carriageway with no divider between both lanes. Every journey involves vehicles dangerously overtaking each other which often results in deadly accidents.

I had a chance to be in two districts of the division -- Jaffarabad and Naseerabad -- and see how they fared in terms of development.

After a four hour journey and travelling for about 300 kilometres, I reached Dera Allah Yar town, headquarter of Jaffarabad district.

Jaffarabad is one of the five districts which make up Naseerabad division. Sharing borders with Jacobabad and Qambar Shahdadkot districts in Sindh, Jaffarabad has a population of 513,813 people and is one of the largest districts in Balochistan. According to a report on Multidimensional Poverty 2016, by the Ministry of Planning, Development and Reforms Pakistan, 75 per cent population of Jaffarabad lives below the poverty line. In the 2010 floods, the entire Jaffarabad district was devastated which wreaked havoc all over the country.

Dera Allah Yar is a hot place given its proximity to Jacobabad, which is one of the hottest cities in Pakistan. In the second week of August, the recorded temperature in Dera Allah Yar was in the range of 38 to 42 degree Celsius. Yet, it had to face load shedding of 12 to 14 hours. "Loadshedding is the main problem the people face because it affects their livelihood and also deprives them of drinking water supply," says Abdul Khaliq, the President of Shehri Ittehad, a coalition of citizens of Jaffarabad. "When we close the roads in protest, FIRs are registered against us, which is totally unfair."

A delegation of Shehri Ittehad went to the office of Deputy Commissioner (DC) Jaffarabad, Zakir Nasar, to register their complaints that I had a chance to observe. Nasar heard their complaints patiently and promised to take up their complaints with the concerned departments to resolve them.

"This way, the biggest problem for people is created by Wapda which is a federal subject and not under our control," says Nasar, while talking to TNS after the meeting with Shehri Ittehad. "I can only write letters to officers of Wapda about the problem and that’s it."

Education indicators are poor in Naseerabad district. For a population of half a million, there are just four high schools for girls. There are 144 primary schools but most of them are closed and not operational.

He further says that often people refuse administration of Polio drops to their children and demand that first, the authorities must ensure water supply to their villages. This explains the gravity of the situation in the district.

Dera Allah Yar may be the headquarter of Jaffarabad but even the city centre looks like a small suburb. There are narrow roads that seemed to have been made without any planning. People in shops sit idle and wait for electricity to return for most part of the day.

Jaffarabad also faces crimes of varying kinds, confirmed by the District Police Officer (DPO) Jaffarabad. Thieves and dacoits who snatch motorbikes from people and rob homes, flee to Sindh and Jaffarabad Police can’t apprehend them without the help of Sindh Police. "We depend on the cooperation of Sindh Police to apprehend our criminals which doesn’t work all the time," says DPO Ayaz Baloch, in his office.

Another major problem related to crime is the issue of honour killing called karo kari. According to the data provided by the DPO office, 13 cases of karo kari were registered in Jaffarabad from January 2017 to July 2018. "Most of the cases are motivated by personal enmities and disputes where the pretext of honour is used to kill the people and no one questions," says DPO Baloch.

Not all karo kari cases are registered and people arrested in the registered cases ultimately go scot-free when the matter is resolved between the families. "There is not much the police can do," he helplessly says.

Rojhan Jamali, a small town that is 11km from Dera Allah Yar, is the hometown of former prime minister of Pakistan Zafarullah Jamali. It’s a 20 minute bumpy drive to Rojhan Jamali. Not only are roads broken in this part, people live in abysmal conditions. Local people of Rojhan tell this scribe on condition of anonymity that the Jamali family, which has been winning elections from Jaffarabad since the 1970s and have got the office of prime minister and chief minister, has done nothing to develop their own hometown.

It is another 24 kilometres to Dera Murad Jamali, headquarter of Naseerabad District and division. Naseerabad district has a population of 490,538 and its level of backwardness is slightly higher than Jaffarabad. According to the Report on Multidimensional Poverty 2016, 77 per cent population of Naseerabad lives below the poverty line.

Naseerabad is one of the few canal-irrigated districts in Balochistan. The agricultural land here is irrigated by the 172km long Pat Feeder Canal that starts from Guddu Barrage, that was built in 1967. The regular flow of water in this canal has turned Naseerabad green, unlike most parts of Balochistan which are irrigated by extracting underground water.

Agriculture is the primary source of livelihood in Naseerabad district. The crops spread over thousands of acres in Naseerabad generate huge revenue every year. However, a few large landowners make big bucks while the hardworking tenants remain trapped in poverty. "Landowners exploit tenants by entrapping them in a cruel debt system where tenants work hard every year but still remain indebted to landowners," says Ayaz, a government official while talking to TNS. "Large landowners of Naseerabad live luxurious lives in Karachi and Quetta at the expense of their peasants. The government system works in a way that it protects the oppressors and not the oppressed." Former provincial minister Sadiq Umrani, and provincial chief of PPP, Sardar Fateh Ali Umrani, and advisor to PM Yousaf Raza Gillani are prominent political personalities from this district.

Education indicators are poor in Naseerabad district. For a population of half a million, there are just four high schools for girls. There are 144 primary schools but most of them are closed and not operational. "We have so far determined that more than 100 schools are closed in Naseerabad." says Younus Sanjrani, DC Naseerabad.

He claims the district administration is doing its best to identify and reopen all those schools which they identify. One third of these 144 schools are for girls and two thirds for boys. These schools were built by politicians in their areas so they could earn kickbacks from construction. They also appointed their men in schools as teachers who didn’t perform, and hence the schools were closed, according to locals.

On the journey back to Quetta, the highway was blocked by workers of Muttahida Majlis-e-Amal (MMA) to protest rigging in elections. Entire traffic coming from and returning to Quetta remained trapped in Naseerabad for hours. I wondered for how long the districts will remain trapped in the cycle of underdevelopment.