In cricket we trust

Like his predecessors who deployed cricket diplomacy to decrease tensions, Imran Khan needs to leverage his legendary status to dig out India and Pakistan from their lowest point in years 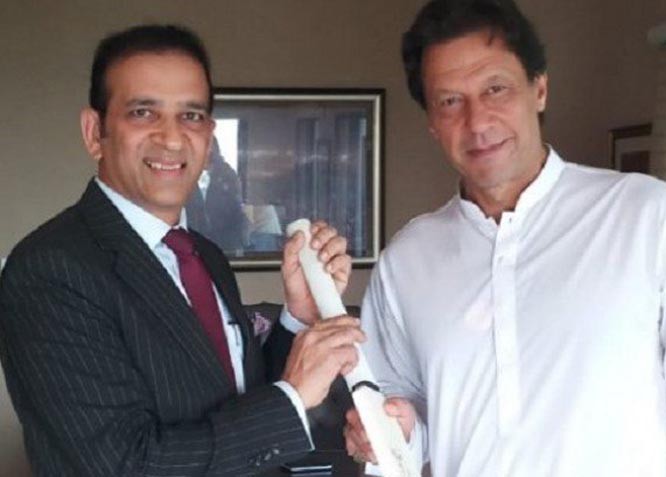 When former star cricketer Imran Khan’s Pakistan Tehreek-e-Insaf (PTI) won the July 25 general election in Pakistan, it created excitement in the cricketing world not just in his home country, but also elsewhere, particularly in neighbouring India.

It triggered a debate over whether other famous sports figures, especially cricketers, could also seek a career in politics. One such well-known cricketer, Sri Lanka’s Kumar Sangakkara, had to issue a statement denying he was planning to follow in Imran Khan’s footsteps. Such a possibility was being animatedly discussed in the Sri Lankan media and had created frenzy in the cricket-mad country, more so due to the fact that the ruling coalition and opposition had yet to name their candidates for next year’s presidential election.

The speculation about Sangakkara was termed believable considering the fact that two former Sri Lankan cricket legends, Arjuna Ranatunga and Sanath Jayasuriya, had joined politics after retirement and served as ministers. Cricketers have good chances of embarking on a successful political career in Sri Lanka, India, Pakistan and even Bangladesh as cricket is the most popular sport in these countries, thanks to the saturation-level television coverage of Test, one day and T-20 matches. Cricketers are household names and some are celebrities.

This is the reason Imran Khan got a head-start when he entered politics after his exploits on the cricket field and his commendable work for humanitarian and philanthropic causes. Still it took him 15 long years to be taken seriously when his huge public meeting at the Minar-i-Pakistan ground in Lahore in 2011 finally proved his star power, and another seven years to win the elections and become the prime minister of Pakistan.

It is possible Imran Khan in future will inspire cricketers, who after retirement mostly become commentators and coaches in Pakistan, to try their luck in politics. Presently though, he is busy receiving retired cricketers visiting his sprawling Banigala residence in Islamabad to felicitate him on his election victory. Among them was star batsman Inzamam ul Haq, who was discovered by Imran Khan and given a chance to play for Pakistan, and crafty spinner Mushtaq Ahmad.

There was another visitor who isn’t a former cricketer, but is a diplomat and being an Indian must be a follower of the game. The visit to Banigala by Ajay Bisaria, the High Commissioner of India in Pakistan, had a double purpose. One was to congratulate the PTI chairman on his electoral victory and to convey the best wishes of the Indian government and Prime Minister Narendra Modi. The other purpose of his visit to Imran Khan’s hilltop home was to present him a bat signed by all members of the present cricket team of India. This was a nice gesture as those playing for India nowadays, including captain Virat Kohli, had never played with Imran Khan and their memories of the Pakistani all-rounder consist mainly of media, videos and books.

However, Imran Khan had set the ball rolling earlier in his victory speech when he extended a hand of friendship to India. He had stressed the need for dialogue with India to resolve all outstanding issues and to make the sub-continent a peaceful region. Nevertheless, the prime minister-in-waiting didn’t forget to mention the Kashmir dispute as the core issue, much to the discomfort of India. Imran Khan in his extempore speech had also spoken about his negative portrayal in the Indian media as if he were a villain and reminded the Indians of his wide travels and acquaintance with many people in India.

Though Imran Khan’s depiction in the Indian media as a hawk concerning India hasn’t stopped, it has apparently reduced after the incoming prime minister’s conciliatory speech. Many Indians, particularly the well-meaning ones, are taking a second look at Imran Khan and pleading for giving him a chance to deliver on his promises.

The Indian government had responded in a cautiously positive tone to his offer of talks and peace by calling for joint efforts to make the region peaceful and prosperous. It was obvious India had not changed its stance that terrorism was a bigger and more immediate issue than Kashmir. Also, the guarded Indian reaction and the comments being made by Indian analysts showed they were not sure if Imran Khan as prime minister would be able to take any initiative concerning improvement in relations with India without heavy input from Pakistan’s military. In their view, no elected civilian government can bypass the military in context of decision-making about India-Pakistan relations. Nowadays, they often cite the example of Nawaz Sharif who according to the Indian view suffered because he wanted to improve political and trade relations with the neighbouring country.

All this hasn’t stopped Imran Khan from reaching out to Indian cricketers he came to know during his cricketing days. Though they played against each other and generated lot of emotions due to the war-like nature of the India-Pakistan cricket matches, this didn’t dampen their respect for each other’s cricketing talent and humanity. Imran Khan extended invitation to three well-known Indian cricketers and it is unfortunate that two of them, Sunil Gavaskar and Kapil Dev, have already regretted that they won’t be able to come. Their reason for not coming is their prior engagements, but it seems politics played a part in their decision in view of the kind of emotional media coverage of the issue.

Najvot Singh Sidhu, the Sikh batsman known for his combative cricket, hasn’t backed out yet and has reportedly applied for a Pakistan visa to be able to attend Imran Khan’s oath-taking ceremony as prime minister in Islamabad on August 18. However, he is coming under tremendous pressure from sections of the Indian media and certain cricketers who wear patriotism up their sleeve not to undertake the visit. One former Indian cricketer waded into the debate by arguing that none among Indian cricketers should go to Pakistan as it would amount to disrespect for Prime Minister Modi as he wasn’t invited by Imran Khan for his swearing-in ceremony. It was also pointed out by certain Indians that legendary cricketers Gavaskar and Kapil Dev played cricket with Imran Khan for about 15 years and they aren’t going to Pakistan while Sidhu didn’t play that long and yet he wants to go.

One was hoping Imran Khan’s would make his own contribution to ‘cricket diplomacy’ by using it to improve relations with India even though the complexity of the India-Pakistan relations is such that it would require much more to break the stalemate. Also the hawkish elements in the two countries would ensure that no breakthrough is made on this front. General Ziaul Haq, General Pervez Musharraf and even Prime Minister Yousaf Raza Gilani paid visits to India ostensibly to watch cricket matches between the two countries, but also with the objective to use ‘cricket diplomacy’ to reduce tension on their borders. In fact, they partly succeeded in reducing the tension. If they could do so, Imran Khan being a former star cricketer and now a popular politician is better suited to practicing ‘cricket diplomacy’.

In cricket we trust