What does this ahistoric evolution of the media say about its future development or its role in PTI’s Pakistan? 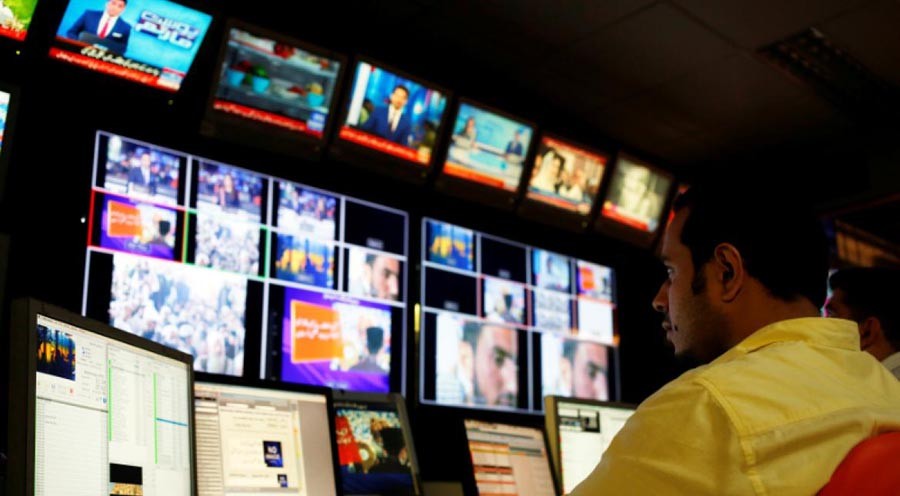 "There’s man all over for you, blaming on his boots the faults of his feet."

Puns aside, there is something very problematic about the collective hating on electoral coverage in the mainstream media. Common refrains: the large media groups are partisan; the anchors shrill and sensationalist; the analysts are conspiracy-mongers; the graphics design teams vomit all they have, all over our TV screens. The trolls rule the social media; the Twitteratti peddle half-truths and many lies; and the less said about Facebook’s algorithms, the better. But the bloated, obscene carcass standing naked before this mirror is the Pakistani nation.

The 2018 election coverage -- in the days running up to and the many days since -- merely reflects who we are and how we got here. As always, the sins are both of omission and commission: as with optical illusions, the negative spaces demarcate the positive. What remains unsaid or unseen is as much a statement of fact as what is said or seen, precisely because the former shows the limits of both free speech and vision.

The act of recognition of an utterance or an event by an audience is essentially an exercise of power: what one chooses to hear or see is a political decision that confers legitimacy on both the speech/act and the speaker/actor. As a corollary, the refusal to hear or to see other things eclipses them from the public discourse. For a substantive analysis of electoral coverage, one must necessarily look at what was left out.

Three moments stood out particularly this summer: the Hameed Haroon interview for the BBC; the HRCP press conference and the Pakistan Today headline on July 26. Each moment defined key features of both the polity and society. Interestingly, however, their significance was diminished by their very content.

Haroon’s interview was torpedoed by accusations that he had slandered the security establishment without presenting evidence; I.A. Rehman’s pre-election statement that the elections would be the dirtiest in Pakistan’s history was dismissed as fodder for the foreign media. Meanwhile, the single-word Pakistan Today headline was lapped up as evidence of PTI’s overwhelming mandate.

Admittedly, the BBC outing was not one of Haroon’s finest moments: Stephen Sackur was undeservedly hostile and Haroon spoke as if the audience comprised Zia-era journalists who knew how to read silences and pauses. But the true significance of the interview lies in the reactions back home.

In this environment of uncertainty, how can one expect any certainty in reporting practices, or hold the media accountable?

That a sizeable number of Pakistanis believe the Deep State -- in any country of the world -- leaves paper trails, visiting cards and a string of reliable witnesses is what truly boggles the imagination. That an equal number of Pakistanis imagine that media houses -- again, anywhere in the world -- have the ability to surveil state institutions, collect evidence against them and present that evidence while living and working in such states is as disturbing. The credulity of the nation would be touching if it didn’t say quite as much about its inability to process complex political realities.

The HRCP presser was as significant and again, for reasons other than Rehman’s statement. The clip of the presser circulating on Facebook showed a fair-sized room but with an embarrassingly thin attendance. The NGO is an influential voice working for human rights in Pakistan and is among the few Pakistani institutions that has won global recognition for its work. Since it began monitoring elections as part of its political rights work, the HRCP has been the go-to for several generations of political journalists. At election time particularly, the HRCP pressers used to be standing-room only events. With all the hysteria about alleged rigging this time, why was the local media largely uninterested in the HRCP?

The Pakistan Today headline is the final piece of the puzzle. Stories filtering out from newsrooms across the country speak of reports that are binned, tickers that are dictated and op-eds that are vetted line-by-line. Anecdotal evidence, of course, and thus not really legally admissible. But what of the people comprising the fourth estate?

Old-school journalists speak of pressure but only among close friends. And then a young journalist circulates a snapshot of Pakistan Today’s front page over Facebook, with a literal reading of the word ‘established’ and an earnest plea for the winning party to respect their mandate. The innocence is beguiling till one starts tallying up the ‘likes’ by scores of other young journalists.

It is this moment that shows up the fundamental disconnect between the last three generations of journalists in Pakistan: the Zia-era ones; the Musharraf-era ones and the Naya Pakistan ones. What does this ahistoric evolution of the media say about its future development or its role in PTI’s Pakistan? Critically, is the Pakistani nation concerned that the incoming generation of journalists, reporters and editors is so divorced from the country’s recent past?

Together, these three moments say something about how the nation reads/hears/sees. They show what we value, what we ignore and what we overlook while we focus on other things. We profess exhaustion with the shrillness of anchors and the progressive counting at polling stations by reporters; we claim to value objectivity over subjectivity. Yet we forget that the one element missing in every single account of these elections was certainty. [The irony of this uncertainty is not lost on regular readers of this paper.]

The only question worth asking on the morning of July 26 was who won. It’s not rocket science; more populous nations have frequently answered such questions. But when the entire machinery deputed by a state to conduct an election visibly struggles with a task as basic as counting for more than 48 hours, can one truly fault sketchy journalistic practices, such as progressive counting? When one can’t predict channel listings any given evening, how are ‘independent analysts’ to predict coalition numbers? And in this environment of uncertainty, how can one expect any certainty in reporting practices or hold the media accountable for their supposed sins? The faults are of our feet; the media is the mirror.

P.S. That said, during an involved round of ‘Election, Election’ after polling day, my nine-year-old niece Ayla who was the TV reporter introducing candidates and their manifestos decided that a breathless falsetto was the tone merited by the gravity of her task. In that moment, I would have gladly killed the man who brought breathless broadcasting to Pakistan.