Men behind the curtain 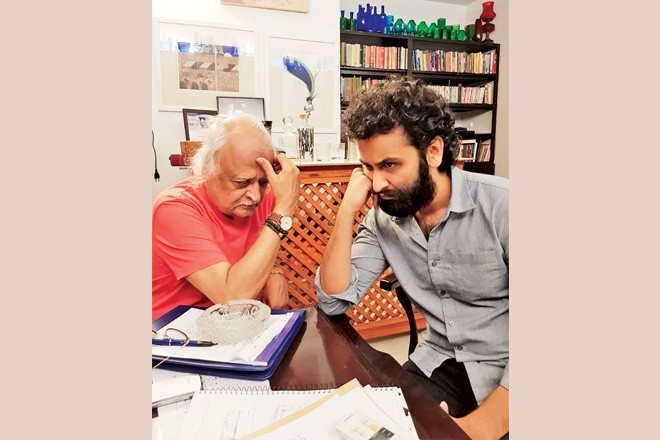 It’s 10:00 a.m. in the morning when I enter the house of Anwar Maqsood, Pakistan’s master dramatist whose words speak louder than actions. He greets me and guides me to where we are supposed to be seated for the interview, where director of his latest play Dawar Mehmood also joins us. The two have reunited after over three years for the upcoming political satire, Kyun Nikala that premieres in Karachi on August 14.

Prior to this, Anwar sahab wrote six plays (Half Plate, Aangan Terrha, Pawnay 14 August, Sawa 14 August, Dharna and Siachen) for Dawar after which he didn’t write the two plays directed by the latter (Bananistan, Hua Kuch Yoon). While multiple reasons have been quoted by publications for why the two parted ways, they refrained from revealing the actual cause during this interview. Anwar sahab reiterated that he had written so much for Dawar and needed a break.

So, what brought them back together?

"We never parted ways in the first place; we were always friends," added Dawar. "It’s just that we are working together after three years. AM [Anwar Maqsood] was writing this script for Ahmed Shah sahab when a new hall was being launched at the Karachi Arts Council. Once we were sitting together and as soon as I read the first page, I asked him do this for me."

The title of the play, Kyun Nikala instantly catches one’s attention because of its political significance and reference to Nawaz Sharif. However, Anwar sahab asserts that it has nothing do with Mian sahab and he had named the play before the phrase became popular.

"The play follows the story of a Bengali cook who is employed at one of the minister’s (home) in Punjab for 30 years," he informed while offering me a cup of tea. "The minister fires him for some reason hence I named the play Kyun Nikala. Then Mian sahab said ‘Kyun Nikala’ so everyone is wondering if the play is about him. It is not about any one political party. The elections took place after the script was finalized but I had told the results then only. I haven’t made any changes to the script post elections. The circumstances I have penned in the script, they are relevant to the current political scenario of Pakistan. It’s a light comedy just the way I write; a fusion of humour and satire."

Anwar sahab speaks with spontaneity without even having to formulate his responses and this is one of the most remarkable things about him. When you pose a question to him, he will have everything to say but the exact answer, indulging you in his thought process while leaving you wondering where you started from. He is the most pragmatic playwright Pakistan has produced in decades.

Perhaps this is the reason why he doesn’t appreciate any changes in his script without his permission. It’s the power of his pen and the confidence in his script that makes him stand out amidst the rest. "I don’t like to make any changes to my script," he admits. "None of the directors change even a single word."

Speaking of writers who complain that their directors and/or producers have an influence on their work and their script often loses the essence in this process, Anwar Maqsood maintained, "If you are a strong writer, you can take a stand when your director asks you to make changes in the script."

Once the script is locked, Anwar sahab doesn’t intervene in the direction process neither does he select the actors as he believes it’s the director’s job to execute the play on stage. He never even watches his own plays.

So, how challenging was it to bring AM’s script to life, I pose to Dawar?

"It’s always a challenge to execute a script which is NOT written by him," he confessed. "There is a flow in his words, which makes it easier for actors to memorize their lines. I find 50 per cent of direction in the script only. If he hasn’t written the script then I have to think how to go about things. Even if there is a weak or bad actor, Anwar sahab’s words hit all the right notes. His dialogue in theatre is just like an item number in cinema, it can’t go wrong. He is the only one who has a license to kill; he can murder someone with a pen and nobody will say anything to him."

"If a play is good, it will work," he explained. "No amount of bad acting can kill a good play. In a stage play, you need dialogues and that too very short. They should be four words long but have an impact. I had not expected that people will like my plays so much that there will be 600 people in a hall that has a capacity of 400. For Dharna, we had five shows in a day and likewise, there are four shows of Kyun Nikala on August 14."

One cannot deny the fact that when this director-producer duo comes together, their product turns out to be a critical as well a commercial success, something that most theatre plays in Pakistan struggle to achieve.

"This is because they rely heavily on adaptations," Dawar pointed out. "It’s very challenging for a writer to adapt a play; it is more difficult than writing an original one. Understanding and applying Shakespeare to Pakistan is not easy and the problem is, these plays aren’t adapted, they are translated."

"I feel, without an original script, there is no scope of theatre in Pakistan," he continued. "Translations cannot work no matter which industry it is. We don’t have any good writers who can combine pathos and humour. Name me three writers right now who can write humour. You can’t! Because there is just one: Anwar Maqsood. Theatre works on content; if AM doesn’t write the script, I don’t think the play will work. But, he can write three or four plays a year at most, not more than that. So, until we invest in our writers, we can’t achieve anything."

Adding his two cents on the subject, Anwar sahab stressed that it is important to involve the audience. "A major chunk of our audience isn’t literate; not all of them are aware of Shakespeare and other writers from the West."

While he was away from theatre for the past couple of years, Anwar sahab wrote a few scripts for films that will be announced soon. Also, he hinted that Sarrhey 14 August is also in the pipeline that he might write in the coming months.

Considering the success of Anwar sahab and Dawar Mehmood’s past collaborations and the amount of hype and expectations attached to their upcoming play that marks their return to stage together, I inquired if they ever thought of making a film.

"He [Dawar] is after me to write a film but I am not ready for an item number and he can’t survive without it," Anwar sahab responded in his signature style.

"We are planning to make Jawani Phir Nahi Ani 3," added Dawar, leading the conversation towards the upcoming Eid releases.

Moving on, we spoke of the ticket price of their plays that are too high due to which a lot of people cannot enjoy the experience of an Anwar Maqsood play. While Anwar Maqsood agrees that it’s too high, Dawar explains that theatre experience costs too much all around the world. He informed that the expenses of a theatre play are equal to that of a film.

Coming back to Kyun Nikala, the play features veteran artist Sajid Hasan as the main lead while the line-up of actors comprises some fresh faces as well. In the play, there are a total of 10 characters that will be essayed by eight actors onstage, including Mohsin Ejaz, Rabbiya Shakil, Sarah Saifi, Nazar Hussain, Raza Zaidi, Tanveer Gill and Maha Husan aside from Sajid Hasan. With one day left for the media night that is scheduled to take place on the eve of Independence Day (tomorrow), the rehearsals are going on in full swing at the Karachi Arts Council.

"Anwar sahab has written the most beautiful dialogues and the most amazing script for Kyun Nikala," Dawar claimed, assuring that the old, the classic playwright is back with his signature style of writing. "None of our past plays will be able to match the beauty with which he has written this time. Audience’s expectations are high and we are nervous but I can’t foresee how the play will turn out to be. In these 14 years, as far as I have understood the dynamics of theatre, no matter how much efforts you put in, how well-researched your work is, how good of actors you choose, these things don’t tell if the play is a hit or a miss. It completely depends on audiences."

Opening to public at the Karachi Arts Council on Independence Day, Kyun Nikala will run in the city for a month before heading to Lahore (October 1 - October 15) and Islamabad (October 25 - November 15). Also, this time the play might be performed in other countries as well since they are receiving calls from America, Canada and Dubai. If this materializes, the international tour will begin in February next year, once they are done with shows in Pakistan.

On a parting note, I asked Anwar Maqsood if there is anything he would like to say to our readers about the play and he said, "Niklo Pakistan Ki Khatir." Get it?

Men behind the curtain