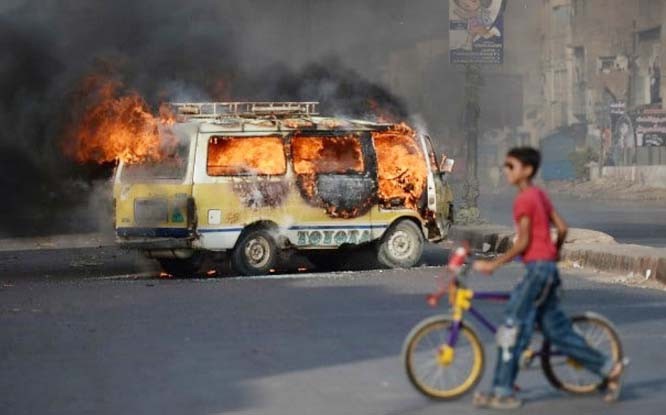 Life in Pakistan is typically characterised through categories of lack. Economic hardships, restrictions on speech, behaviour, mobility, the stifling of agency, and a plethora of daily frustrations, ranging from security concerns to shortages of water and electricity certainly do not flood the wells of life with welcome abundance. Yet, one must wonder, are these the only possibilities for life here? Do lives exist beyond the limits of this discourse? What would it mean for us to read this lack otherwise?

To an extent, my years spent in the West offer me the necessary hindsight through which to reflect on my life outside its bounds. My intellectual coming of age in a racist and xenophobic, individualistic and fiercely capitalist United States throws into sharp relief the richness of the life I had in Pakistan. I recognise now that I was privileged to not grow up with the constant burden of white supremacy and the everyday anxieties and psychological costs induced by racism.

In the US, belonging for people of colour is a precarious, fleeting thing. I feel lucky that I didn’t grow up with the need to mould who I was, to always have to learn new ways of being myself -- of being Pakistani and Muslim that were palatable and non-threatening -- to be able to feel like I belonged.

Growing up in Pakistan, one cannot but confront the omnipresence of realities different from one’s own; diverse histories and temporalities; disparate memories and fantasies are deeply inscribed into everyday geographies. To attempt to think of a single mould into which a ‘Pakistani’ might fit would be a task in impossibility. The sheer force of this multiplicity ruptures efforts towards homogenisation. Voices of difference demand to be heard, and in their insistent roar they provide a sense of grounding and belonging that I have scarcely felt in my years abroad.

Other excesses -- ontological and epistemological -- too coloured life. I grew up in the warm folds of family and kin where love was shared and distributed openly and generously. Relational bonds, even among strangers, were so strong and enduring that they seamlessly rendered even the most trying times of financial, emotional, and political distress bearable.

In the wake of natural disasters, for example -- earthquakes in Islamabad, massive flooding along the Indus -- entire schools would fill up, as if over night, with emergency supplies; relief drives never failed to consume entire cities to ensure that no one in need of medicines, food, and clothing was left unassisted.

The fundamental question stands. How are we to read the text of Pakistani life?

Every Friday afternoon, scores of people laid their hearts wide open to feed the hungry, with spreads that graciously extended the length of entire city blocks. Not a single Ramzan would go by without a months-worth of rations being distributed by those with means to support families without.

Everyday life in Pakistan was structured less around the viciousness of possessive capital accumulation, as I find life in the States so strongly to be. Instead, alternative, more intimate economies were persistently sought and forged. Such efforts at everyday economic reconstruction were guided by a familial affinity for the other, thus pointing towards a radically different political-economic horizon: one based not on unceasing gain but on compassion, relationality and humanity.

Remarkable too are the ways in which a childhood spent in Pakistan forced one to dispense with fatalistic views of the world and hopeless imaginations of the future. Lifetimes are spent under skies dotted with flying bullets, with threats to kidnap loved ones, and in the thick of crowded markets that unexpectedly explode. Even amid the looming dangers, we knew there were other lives to be lived. And so we went on, fiercely living -- despite the noise in the background.

Accentuating the commotion above all else in our portraits of Pakistan simply fails to do justice with the reality of everyday life in the country. It refuses to account for the world-making practices of those struggling to live against the pulse of the pandemonium.

We learned how not only to survive, but to creatively, and against all odds, live. Even when enveloped by an unfading darkness and the numbing pain of loss, we managed -- desperately, stubbornly -- to sneak in moments of laughter, joy, and hope -- however brief they might have been. Growing up in Pakistan, we couldn’t help but learn resilience, could not but embody the utmost grit in the face of utmost despair.

Our everyday forms of resilience, even in the wake of unbelievable violence, offer us a way of being and knowing that inherently opposes categorisations that pivot exclusively around the negative.

There is much more that needs to be said. But the fundamental question stands. How are we to read the text of Pakistani life? Categories of lack are unimaginative. And they are hopelessly inadequate at capturing the enriching complexity of lives lived here.

For those of us who grew up living the dizzying realities of Pakistani life, we have always known there are other worlds to be imagined, alternative futures to be charted, and wildly different stories to be written than the ones which have been ascribed to us. Our task, then, is to write, imagine, dream them into being. To drown out, relentlessly, the discursive clamour which tells us that we are, somehow, less.