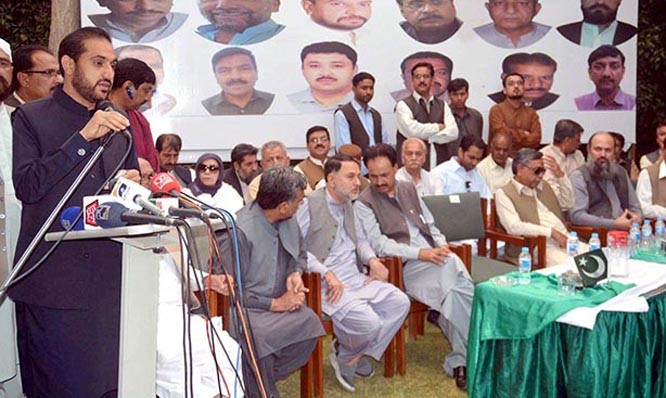 On July 25, the people in Balochistan were excited about the elections but no one anticipated it would end in a controversy. As soon as the elections were over, the allegations of rigging and manipulation of results surfaced from all over the province. The delay in the release of election results worsened the situation -- and provided strength to claims of rigging.

Balochistan Awami Party (BAP), the party created and supported allegedly by the establishment, swept the recent election in districts Kech and Awaran, amid complaints of massive rigging by the losing candidates.

Pashtunkhwa Milli Awami Party (PkMAP) Chief Mahmood Khan Achakzai openly blamed the establishment for stealing his party’s mandate. His party managed to win only one seat from Balochistan. Hasil Bizenjo, President of National Party (NP), expressed similar concerns about the involvement of the establishment in election rigging. His party failed to win a single seat this time around. Sardar Akhtar Mengal, whose Balochistan National Party-Mengal became the third largest party in Balochistan, has also raised concerns about irregularities in the elections.

A pertinent question is, how transparent were the July 25 elections in Balochistan? All the losing parties have cried foul after every election since 2002. It has become customary for them to not accept the results and claim a grand conspiracy was hatched to keep them away from power. However, in this election, the allegations of rigging have gone a step further because even the winning parties like the BNP-Mengal are levelling rigging allegations.

Malik Siraj Akbar, an analyst based in Washington DC, says: "Parties, like the BNP-Mengal, are showing strange behaviour. They are rejoicing their wins but are also levelling rigging charges in areas where they lost."

In last month’s election, BNP-Mengal has done exceptionally well, "beyond anyone’s expectation. But it doesn’t make sense when they complain of rigging -- because it indicates that the seats they have won are through rigging too," says Akbar.

The general elections 2018 in Balochistan witnessed the fall of many towering personalities. No one had imagined Sarfraz Bugti from Dera Bugti, Nawab Jangez Marri from Kohlu, Jaffar Mandokhail from Zhob and Amanullah Notezai from Chagai would not get elected. "The results demonstrate people’s willingness to give democracy a chance. They hope that the newly-elected leaders will resolve their problems," says Akbar, continuing that the voters elected many MPAs for the first time in a bid to try new candidates.

With the elections behind us, the next important question is: what should the next government do to solve the mounting problems of Balochistan?

The Election Commission of Pakistan (ECP) is in the line of fire. The voting process was unusually slow. Many journalists and observers across Balochistan, complained about delays in the voting process. Like other parts of the country, in Balochistan too, the polling agents complained about not getting Form-45. The election results from Balochistan were the last to come, with the last one coming no less than 64 hours after the elections ended on July 25. Ensuring such issues don’t arise was the ECP’s responsibility, and it is perhaps rightly blamed for them.

Journalist Shahzada Zulfiqar points to gaps observed in the system on the election day. "There were many instances where one candidate was winning all the way but when the final result came out, another one was declared the victor. In PB-2, for example, the candidate of MMA was declared victorious and Form-47 was also issued but later it was announced that the PTI candidate had won in recounting. This makes the process dubious."

He adds, unlike previous elections, when one or two parties would protest, this time almost half of the contesting parties are ringing alarm bells. "Some key candidates of the BAP lost (or were made to lose) to indicate that the elections were fair, not rigged. It’s baffling."

All the leading parties are gearing up to form the government. The BAP is in a strong position to form the government because it has the support of smaller parties as well as independents. Even the PTI leadership at Bani Gala has made an announcement to support BAP’s Jam Kamal for the office of chief minister.

However, power politics in Balochistan is not so simple. Reportedly, there are divisions within the BAP. Multiple candidates within the party have emerged for the position of chief minister. The forward blocs in BAP are separately negotiating with the BNP-Mengal and MMA ways to form the government.

So, if the BAP forward blocs manage to break away from the party discipline then Balochistan can have a coalition government of BNP-Mengal, MMA, and BAP dissidents. However, BAP spokesman Chaudhry Shabbir denies formation of forward blocs within the BAP in an issued statement.

Agha Hassan Baloch, spokesman of BNP-Mengal and MNA-elect from NA-266, says that the BNP-Mengal is trying to form its own government with other parties. This proves that efforts are underway to form the government bypassing the central leadership of BAP.

Shahzada Zulfiqar agrees that the BNP-Mengal is making efforts to form its own government. "We will see a very weak government in Balochistan in the coming days, judging from the way electoral politics is taking shape."

With the elections behind us, the next important question is: what should the next government do to solve the mounting problems of Balochistan?

Author and cultural critic, Dr Shah Muhammad Marri believes ongoing armed conflict is indeed the most pressing problem facing Balochistan. "A negotiated settlement between both the parties [state and the insurgents] is desperately needed. But it’s unlikely that the next government will have the power to even try to initiate any such move."