Ted talk of the town 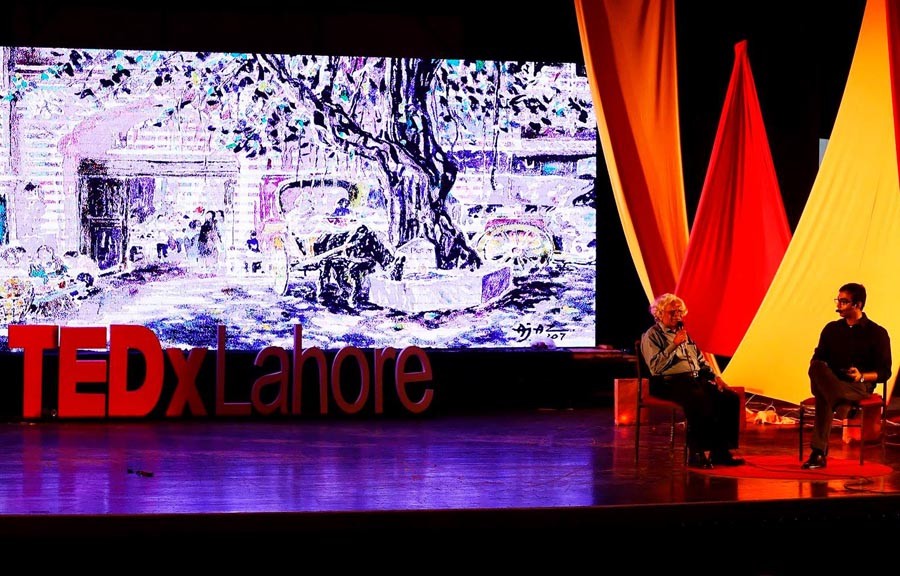 The recently held TEDxLahore boasted a theme -- "Future Now" -- that resonated with everybody who participated or attended it. Held at Ali Institute of Education, the much-anticipated annual event saw a lineup of speakers who told inspiring stories of their struggles and successes or, simply, of ‘small’ ideas that had worked wonders for the communities at large.

The event kicked off with a fascinating musical performance by The Drum Clinic -- a group of 13-odd percussionists, founded by Atif Saeed -- which was accompanied by the vocals of Umar Aziz, a young crooner who gave his rendition of Allama Iqbal’s poetry from Baal-e-Jibril. It drew raucous applause from the audience.

The musical act was quickly followed by Dr Uzma Khan aka "Dolphin Lady," a wildlife biologist presently leading the Global River Dolphin Initiative of the World Wide Fund for Nature (WWF). She is said to have brought light to the plight of the Indus River dolphins ("Bhulan" in vernacular) that are fighting for survival.

Dr Khan revealed about a dolphin, named Musafir, who is helping the scientists to study the movement of mammals across the river. "Indus River dolphins are the only river dolphins that are increasing in number due to preservation efforts," she said.

From the dolphin Musafir, the talks veered to another kind of ‘musafir’ -- distinguished painter, academic and conservationist Dr Ajaz Anwar, who has travelled the world and captured it on his canvas. But this traveller has only one home, Lahore.

Dr Anwar spoke cogently of his inimitable love for Lahore coupled with his grief at what he called "the loss of culture and colour of the city." He talked about Basant, in particular, and how the "Lahore of culture rather than a Lahore of concrete" features in his oil paintings. He also recalled the city from his childhood days, and came down hard on the war against the city’s heritage, saying: "This is my childhood. Kisi ko haq nahi pohanchta ke mera bachpan chheen le (no one has the right to take away my childhood)." He exited the stage to a standing ovation.

These talks usually work as a great pick- me-up for people. TEDxLahore, however, was a pick-me-up for the whole community. The audience left the auditorium feeling a bit prouder of their country’s people.

Oil paintings were soon replaced by the art of telling impactful stories. Advertising gurus who have numerous international accolades to their credit, Hira Mohibullah and Moiz Khan discussed the effect a well-crafted campaign can have on an audience. Reviewing their participation in several social awareness campaigns such as child brides in Pakistan, and ‘Change the clap’ initiative for the Trans community, the highly articulate duo outlined key elements of storytelling and how a whole community can be changed with just the right story.

Next, Mudassir Aqil, CEO of FINCA Microfinance Bank, was invited on stage to share his thoughts on the emergence of digital banking in Pakistan through digital wallets and funding startups situated in even the rural areas. He brought the day’s first session to a close.

During the 30-minute break, the attendees had the opportunity to network with the select speakers as well as browse through the stalls which mostly had souvenirs and pamphlets about the startups (that the speakers were to discuss in their talks) on display.

Aqsa, a recent graduate from Kinnaird, waits every year for the TEDx event. "It inspires us a lot," she told TNS. "We get a chance to interact with people who are not just thinkers but also doers." Her friend, Ayesha, quickly added, "Hearing all the speakers inspired me to work for our community. Maybe someday I’ll also have interesting stories to share on a similar platform."

The event resumed with a riveting musical performance by Janat Sohail Aziz who was in the list of Pakistan’s top three indie artists, prepared by Beehype for 2017. Playing ukulele to perfection, Aziz’s mellifluous voice not only complemented her compositions but also acted as a smooth transition from the break to the rest of the evening.

The next speaker, Abid Omar, founder of the Pakistan Air Quality Initiative in 2016, highlighted the pollution emergency in Pakistan and especially in Lahore where the air quality is nine times above safe limits. In November 2017, the city was under an envelope of smog -- a public health emergency brought upon by countless industrial projects and vehicular emissions. Omar stressed on the importance of bringing about environmental change and becoming informed citizens so as to clean up the air, and with it tackling the leading cause of sickness in our country.

Omar was followed by Shahzeb Khan, a writer and educationist whose talk centred round the concept of decolonisation of the human mind, and whether we as a nation have actually been freed from the clutches of our colonisers.

Barrister Taimur Malik and philanthropist Amna Naqvi soon followed respectively for their talks. Both have contributed towards the betterment of the society, and both were equally worthy of that spot on the stage.

Later, the curator for the event, Irteza Ubaid, who was also part of the team that organised the first ever TEDx in Pakistan in 2009, described the arduous process that takes place before the launch of such an event. Although the speakers were shortlisted in March this year, constant communication sessions through Skype calls and rehearsals were set up to ensure a successful launch for TEDxLahore. For Ubaid, "The whole idea of a TED talk is to focus on a single issue by a variety of speakers. We decided that the theme for this year’s event will be the ‘Future Now’."

For an event of this stature, TEDxLahore was not without its fair share of hiccups. During the event, multiple light outages interrupted the speakers and disturbed the flow of the event. PowerPoint and technology was not the man’s best friend, as the speakers struggled to get the slides changed. One of the attendees was also critical of the use of English as the main language of the event.

Ted talks usually deal with singular, personal problems of people. How many times do you find yourself scrolling through YouTube, trying to find the perfect talk to motivate you? These talks usually work as a great pick-me-up for people. TEDxLahore, however, was a pick-me-up for a whole community. The audience left the auditorium feeling a bit prouder of their country’s people. If anyone left without a speck of motivation, then they probably never paid attention.

Ted talk of the town