Lahore is another story

‘Takht-e-Lahore’ reemerges as PML-N stronghold, and there are reasons other than infrastructural development for the party’s sustained popularity 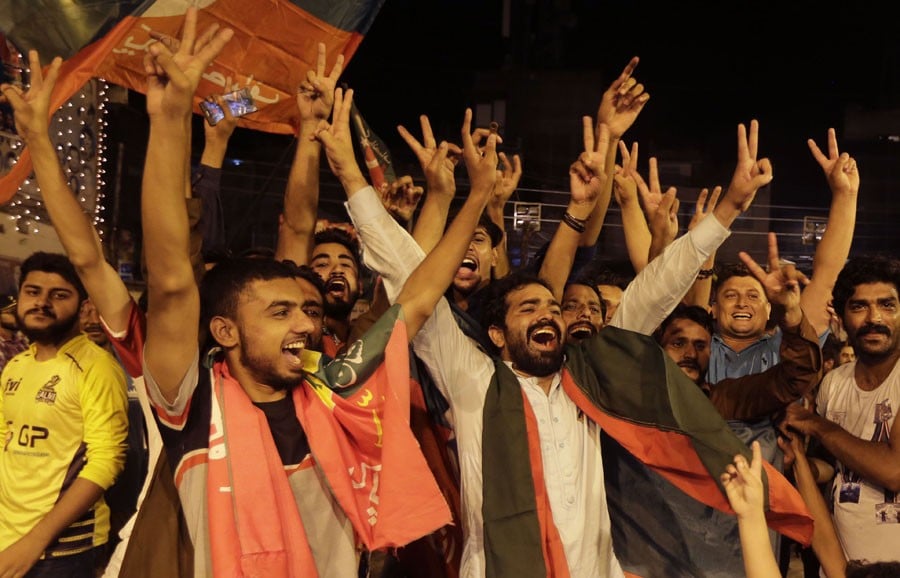 Yousaf Hussain, pushing 30s, is sporting a tee that has tiger’s face printed across it. He is trying to enter a polling booth in NA-124, in Lahore, but stopped by the polling staff. They want him to change his shirt; apparently, the ‘sher’ being a party election symbol is the problem.

The staff insists that a display of this kind in the premises of a polling station is not allowed by the Election Commission of Pakistan (ECP).

The orders are so strict that the voter’s slip that they need to carry to the presiding officer is also supposed to be minus the picture of the candidate or his/her election symbol.

Hussain is adamant to cast his vote with the shirt on. "I’m a proud PML-N supporter, and not a coward like my opponents. A ‘sher’ never budges, neither would I," he says, roaringly. Eventually, he leaves without casting his vote. He says he decided not to vote in protest but to hang around there raising hue and cry about this "discrimination" in front of the people gathered there.

Hussain is just one of the many PML-N supporters in the city who vehemently supported the party during the elections for one reason or the other. TNS talked to a number of voters, across all ages and backgrounds. It turned out that they supported the party even if they couldn’t come up with a convincing argument. Some of them said they voted for PML-N because their elders had done so, too.

On the other hand, the PTI supporters were mainly concerned with bringing the "tabdeeli" (change) their leadership has promised to bring after coming to power.

Post polls, as the results arrived, Pakistan Tehreek-e-Insaf (PTI) showed a remarkable surge compared to the 2013 general election. The party has fared well in the elections for the national and provincial assemblies in KP, Punjab, and even Sindh. In almost all the areas where the PTI fielded its candidates, it has been able to make its mark. But Lahore is still a different story, where the PTI had a formidable opponent in PML-N.

Despite the PTI wave, so to say, the results of the NA and PA seats in Lahore show a deeply entrenched support for the PML-N. This is quite surprising, considering the pre-poll environment in the city where the presence of the PTI workers and their campaign material was overwhelming.

Despite the PTI wave, so to say, the results of the National Assembly and Punjab Assembly seats in Lahore show a deeply entrenched support for the PML-N. This is quite surprising, considering the pre-poll environment in the city where the presence of the PTI workers and their campaign material was overwhelming, compared to the PML-N’s. Of the 14 NA seats, PML-N has won 10, and 20 out of the 30 PA seats. Many of these were tough contests.

The performance of PML-N (in Lahore), at a time when it has faced a dent in its popularity in other parts of the country, calls for a look into its possible reasons. No doubt the development-focused approach of the party is a reason, but there are other aspects also that need to be looked into.

Faizan Bangash, a journalist familiar with the political landscape of the city, tells TNS that a major reason for PML-N’s deeply entrenched popularity here is that it has been practically in power (in the Punjab) since 1985 and serving its electorate. The party, he says, has always fielded the heavyweights and rarely brought in candidates from outside. "In the past, the key to PML-N’s success was nomination of people from Arain and Kashmiri biradaries (clans) but now the party affiliation carries weight as well," he adds.

"The candidates from Lahore include NA speaker, former federal railway minister, two members of the Sharif family etc and so on."

Bangash adds that the PML-N gave jobs to a large number of people in police, excise, revenue department etc in 1985 and onwards. These officers are loyal to the party and enjoy a considerable control over the administration of the city as well as the province. They provide relief to the people when approached through a network of PML-N coordinators and councilors. All this resulted in strengthening support for the party.

While the nomination of strong candidates proved helpful for the PML-N, it is believed that the disputed award of tickets to PTI candidates went in favour of the former. Salman Abid, a political analyst based in Lahore, claims the Lahoris are used to having a direct, face-to-face interaction with their political leaders and they are not that forthcoming towards unfamiliar faces.

He says that many voters told him they voted for PML-N just for the reason they reached out to him whereas the PTI candidates and their supporters did not bother to approach him. An example, he says, is that of Nauman Qaiser who lives in Canal Bank but was made to contest in Northern Lahore including the Walled City area. Besides, leaders like Waleed Iqbal were there but did not put their weight behind the campaign.

However, he says, this does not mean the PML-N did not provide relief to the people. "The Lahore-centric development has helped the party [here] and so has the improvement in electricity supply situation compared to what it was in 2013."

Sheikh Umar Hussain, an active PTI worker in Lahore, sees the strong network of PML-N at union council level as the key to the party’s better performance in the city. "While it was tough for them [PML-N] to bring their volunteers out on the polling day, their teams comprising paid LG staff were up at 6 am," he says, adding that they called their voters in every mohallah to get ready for polling so that they could be picked up from home and dropped once they had voted.

Hussain believes the PML-N’s control over Lahore shall weaken with time. "In 2013, we got one seat in Lahore, and this time it’s four. The people are slowly realising that projects such as Metro Bus and Orange Line are not symbols of real development and feasible, especially considering the amount of subsidies given by the government on these.

"The PML-N has failed to deliver in the field of education, health, and in providing safe drinking water, and should be held accountable for its failures," he concludes.

Lahore is another story