From Kalat to Mastung 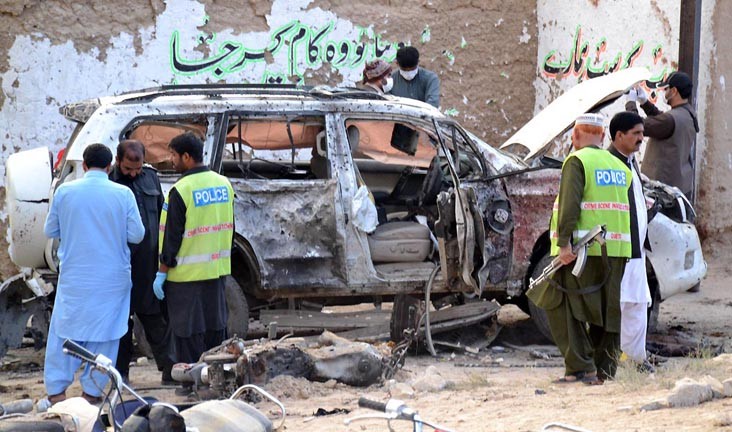 Raisanis are known to be patriots and extended frontline support to the security agencies in establishing writ of the state. Their political gathering at Mastung was targeted brutally with an unprecedented loss of lives in a single incident. Religious militancy has mostly been against the Hazara community, yet the same is spreading across the political spectrum. The issues are the same, only the means are changed. The wound is deep and it’s time to address the fundamental fault-lines plaguing the largest province of Pakistan.

Muhammad Ali Jinnah was legal advisor to the Khan of Kalat, Mir Yar Muhammad Khan, who accorded immense respect to Jinnah. Princely state of Kalat is Balochistan in a sense that it comprised 70 per cent of the present day Balochistan. British proclaimed that all the princely states are free to opt either for Pakistan or Afghanistan. Swat, Dir, Chitral and Kalat, along with others, were princely states. Some transitioned smoothly whereas some faced hiccups during their transition.

Mir Yar Muhammad Khan revealed in his autobiography that he signed the accession treaty unwillingly and in complicated circumstances. Pakistan manoeuvered the situation and made him sign the treaty, perhaps much like how Nehru dealt with the Raja of Kashmir. Kalat was a complex of various tribal confederacies wherein even the "Khan" was not empowered to sign them off arbitrarily to any state. Hence, the due process as per the system of Kalat was not followed, thus came the backlash immediately. Even the conditions of accession were not met since immediately after the accession, army occupied the strategic locations and put an end to the "Rule of Kalat".

In March 1948, brother of Mir Yar Muhammad Khan went to the mountains and rebelled against the state of Pakistan for occupying the state of Kalat. The state responded in the similar manner as done by Gen. Musharraf when provoked by Nawab Akbar Bugti. Thus begins the saga of Balochistan’s strange relation with Pakistan.

Balochistan has coal, chromite, gold, gas and above all the port of Gwadar. What’s the use of these resources against the backdrop of never ending violent political conflict? CPEC is in the talks yet the plight of Balochistan is a taboo for mainstream political debates. The reason to silence such voices may have stemmed from fears that it may affect the huge CPEC investments.

To begin with, the government has to recognise that there is an issue rather than looking the other way. Second is the process of political reconciliation with the disenchanted Baloch.

The increasing number of Baloch being abducted, maimed and killed won’t help improve the situation. The deprived and suppressed communities can never learn to love the state through force. They may be subjected to respect the state yet winning hearts and minds would require change of the strategy in vogue. Perhaps the six points of Akhtar Mengal still hold water and would be a beginning point to initiate the peace process. They are at least indicative of the major issues plaguing Balochistan. The six points include ending all overt and covert military operations against the Baloch, missing persons should be produced, end to killings of the Baloch youth, free play to all Baloch political parties, accountability and rehabilitation of the displaced people. Well, several points may seem not doable to the government, yet at least those pertaining to future course of action can be adopted with letting the bygones be bygones.

The relatives of missing persons have been staging protests, walks and hunger strike camps, yet the mainstream media and political parties won’t dare to comment. Sabeen Mehmud had to sacrifice her life to let others know of the plight of people in Balochistan. The Baloch youth have been organising pro-Balochistan workshops in the European capitals. Brahamdagh Bugti would shake hands with anyone ready to support his cause after losing all hopes of reconciliation. Dr Allah Nazar Baloch and other educated Baloch are leaving their comfort zones and opting for a militant life -- there is something wrong.

The status-quo beneficiaries comprising the political government don’t have the guts to extend an olive branch to the Baloch nationalists. Both the medical doctors, Dr Abdul Malik Baloch and Dr Allah Nazar Baloch may have the same concerns for their people, yet they found each other on the opposite sides -- former being a face of the government and latter a rebel against the state.

The ongoing political-cum-militant conflict has given rise to a framework of political and economic rent-seeking, where the elites chip in to seek benefits rather than dismantling the same and making inroads for peace.

No one knows what happened to the peace deal between the then political committee comprising Mushahid Hussain Syed and Chaudhry Shujaat etc and late Nawab Akbar Bugti. The same lapsed and resulted in a military operation. Someone may have misguided Gen. Musharraf to the effect that purging off a few tribal chiefs will be a panacea for all the issues of Balochistan.

There is no doubt that foreign hands are involved in destabilisation of Pakistan. They indeed are worried about the CPEC and its benefits for Pakistan. They are undertaking covert activities inside Balochistan and might be helping the Baloch militant groups with money, weapons and logistics. They are even helping the political dissidents raise their voice at international forums against Pakistan.
However, a reactionary strategy to such acts won’t help,
neither in short nor in the long term.

Labelling any person criticising state policies in Balochistan as traitor or anti-state will further erode the trust of citizens. Listen to them, don’t silence them since enforced silence will lead eventually to an implosion. Besides, the times too are changed. If PTV or other private tv channels are state managed, what to do with social media and other virtual means.

China is investing billions in Gwadar and its allied facilities, but would that be viable given the ongoing turmoil. Successive governments did try to ameliorate the plight of Balochistan yet the same was always less in proportion to the damage wrecked otherwise. For instance, the PPP government came up with Aghaz-e-Haqooq-e-Balochistan initiative but that was a limited package lacking in several core political aspects. Besides, it was left midway like other such goodwill gestures of the past. The government needs to build on the same and include other aspects especially regarding political reconciliation and addressing economic grievances.

To begin with, the government has to recognise that there is an issue rather than looking the other way. Second is the process of political reconciliation with the disenchanted Baloch. The reconciliation must be based on sincerity and keeping in view the Baloch intra-tribal
dynamics.

From Kalat to Mastung