Even the most skilled translator cannot be expected to faithfully grasp and transfer the elusiveness of poetry. Yet it has always been attempted across the world 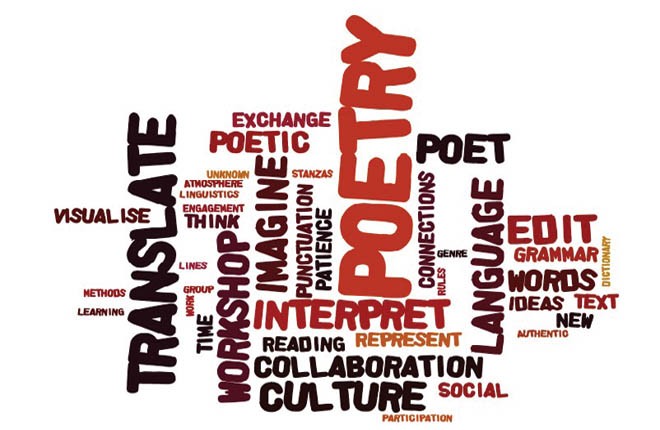 It is generally believed that poetry eludes translation. In the act of translation of poetry, there are way more losses than gains. Two reasons are usually offered in this regard: one, the language employed in poetry is so culturally distinct that its exact linguistic parallel cannot be found in any other language; two, ideas and thoughts of poetry are heavily soaked in emotions and feelings, expressed through a unique yet elusive cognitive process involving distinctive, metaphoric language. Both cognitive process and metaphoric language cannot be replicated even by the most skilled translator.

What is familiar and in common use -- proverbial language and familiar thoughts etc. -- is discarded by a poet as clichés and stereotypes; both have lost the quality of stirring poetic imagination.

In spite of all these seemingly strong reasons, poetry has always been translated the world over. The urge to know distant lands, their inhabitants, languages and their strange, real or imaginative experiences is rather strong. The question of meeting the impossibility of translating of poetry is epistemological and its answer has been tackled in sticking to the very meaning of translation -- carrying across.

Carrying meaning of a poetic text across is a twofold process. First, it is to be ensured that the meaning had been conceived within the cultural context of original language; and then it is interpreted in the cultural perspective of the language being used for translation. So, the act of translation turns into an act of interpretation. Interpretation/translation of a work causes ‘another’ text to be produced, instead of bringing forth an exact replica of it.

It is true that meanings and the cognitive-cum-creative process involved in the production of meanings cannot be replicated. Even a poet of great repute cannot experience a particular creative moment twice. Many writers have tried their hand at translating their own texts and have failed in achieving the same state and level of creativity they experienced the first time. They had to face the same sorts of challenges that professional translators have had to go through.

For instance, Quratul Ain Hyder, Abdullah Hussein, Shamsur Rahman Faruqi translated their own novels, Aag ka Darya, Udas Naslain and Kai Chand thay Sar-e-Asman respectively while Wazir Agha translated his long poem titled Aik Katha Anokhi (A strange tale) into English. All these renditions failed in accomplishing the greatness attributed to their Urdu versions. Deficiency in foreign language, in contrast to proficiency in the native language, could be one reason. Yet, in this case too, the fact that a particular cognitive process is inimitable cannot be ignored altogether.

Interpretation is not simply an act of decoding. Nor does it explain the meaning of a source text. It is an attempt to re-create the whole ambience that surrounds the source text. Translator of poetry cannot stay unflinchingly faithful to it; there is nothing solid, fixed or rock-hard in poetry that can be faithfully embraced by a translator. To put it simply, poetry is not an object. In contrast, fiction has some sort of solidness in the form of characters, situations, events and real things and objects that can be faithfully transferred from one language into other.

Then, elusiveness is an essential characteristic of poetry. How can even the most skilled translator, claiming to have enviable command over both languages and their literary traditions, faithfully grasp and then transfer this elusiveness? He or she is left to interpret or, in more accurate terms, re-create the ambience encircling the poetic text in their language and that too only approximately.

So, the translated text doesn’t qualify to be termed as accurate equivalent of the original text.

Interpretation practised in translating a poetic work appears an exclusive and individualistic activity. Astonishingly, no literary text binds its interpreter/translator to its single, specific manner of interpretation/translation, nor does the translator find it necessary to stick to a single, specific way of rendition. In the act of reading, interpreting and thus translating a literary text seems bound to appear as an open-ended writing.

In Urdu a number of English poems have been translated more than once. Every time, the same English text is rendered in distinct manner. Hasan ud din Ahmad has compiled in many volumes the Urdu translations of Western poetry named Saaz-e-Maghrib. In its 9th volume (published in 1981), he includes two translations of Marry Howitt’s ‘The Spider and the Fly’; one is done by Allama Iqbal and the other by Nazim Ansari. Iqbal’s rendition is tilted as ‘Aik Makra aur Makhi’ while Nazim’s as ‘Aik Makri and Makhi’. The fact that both translators chose a different gender for the spider needs to be noticed. It is matter of preference that has ideological significance.

The first four lines of Iqbal’s poem read as follows:

"Will you walk into my parlour?" said the Spider to the Fly,

’Tis the prettiest little parlour that ever you did spy;

Neither of the Urdu translations can be termed ‘wrong’’; both are correct (yet not accurate) and seem close (yet not faithful) to the meaning of original text. But the first translation of Howitt’s poem is deemed more readable and ingenious simply because Iqbal re-created the ambience more skilfully. Here ‘skilfully’ means employing the common Urdu idiom dexterously with an alluring rhythm.

How the same poetic texts causes multiple renditions can be seen in the Urdu translations of the poetry of Rumi, T.S. Eliot, Goethe, Neruda and Mahmoud Darwish. These are the few most-admired names among Urdu readers. Munno Bhai, Muhammd Kazim, Amjad Islam Amjad, Farooq Hasan, Anwer Sen Roy and others have rendered Darwish’s poem into Urdu. Some of them have selected same poems but we find the least consensus in the translated versions.

While a poetic text allows translator a wide interpretative space, it also gives way to multitude of possibilities -- from political use of text to cultural dialogue to canonisation. Looking at the trajectory of translation works done from different languages into Urdu, one can easily grasp and narrate the ebb and flow of history of politico-cultural changes and literary canonisation. Since late 19th century, British English poetry began to be widely translated into Urdu in an obvious bid to make it the canon for a new school of Urdu poetry. Around 1930s, Urdu renditions of Russian progressive fiction and poetry occupied the centre-stage. In the same period, Meeraji ventured to translate French, German, American and old Indian poets into Urdu. So, the hegemony of British poets began to be vanished.

In the postcolonial period, African and Latin American poets were widely translated whose texts -- in contrast to European and North American poetic texts -- possessed more significance for us, being more close to our historical experience. Unfortunately, the surfeit of Urdu translations from Western, African, American and Perso-Arabic poetry cannot be compared to the volume comprising Urdu renditions of poetry from Pakistani languages.

Globalising of Urdu was (and is) a colonial construct that has kept local languages and their literature at bay.