The Green Town area lying next to Township, Lahore, is a microcosm of the structural deficiencies faced by our ailing water management system 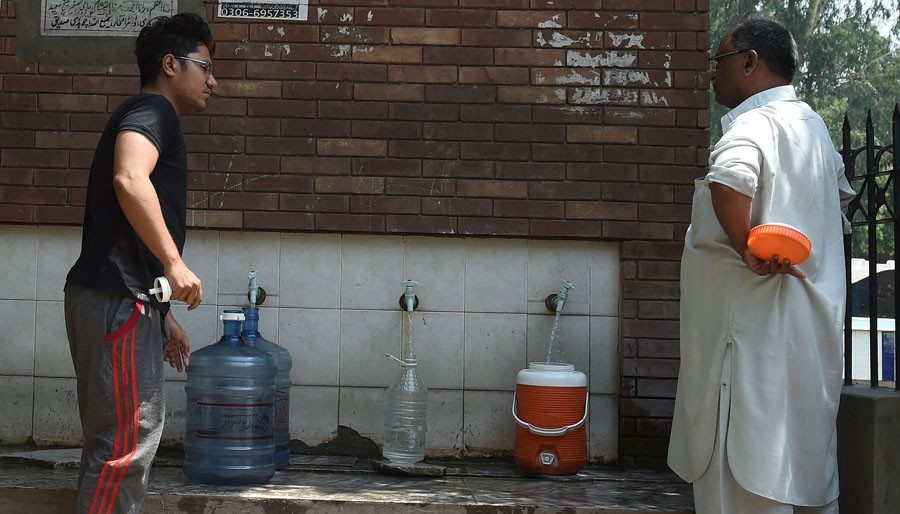 The water crisis in the country is becoming a popular rallying cry for voters dismayed by the performance of all the mainstream parties on the local level. From the Lyari attack on Bilawal Bhutto to young voters haggling Saad Rafique at an election meeting, the voters faced with a water emergency are confronting their candidates aggressively.

The politicians and the other powerful stakeholders like the Supreme Court have responded by rhetoric of building dams and other mega level projects. While dams are a necessity, a large part of the water crisis can be attributed to a dysfunctional, corrupt, and obsolete management. The Green Town area lying next to Township, Lahore, is a microcosm of the structural deficiencies faced by our ailing water management system.

A crowd of local residents holding up pots, bottles, and canisters surrounds a filtration plant that lies in a narrow street at 112 number stop, Green Town, right next to the union council office. This is a routine sight in Green Town where the residents are entirely reliant on the filtration plants for their day-to-day usage of water.

Shabbir, a resident, waiting in the long queue for his turn to collect water, spares a moment after filling up his canisters and balancing them on his bike to explain why he is here. "The tap water is stinky; it has sewage water mixed in it. We cannot even use it to wash our clothes, let alone drink it," he says, adding that he has to come to the filtration plant every day to fetch water.

"There are days when I have to wait for up to two hours in the cue, it’s all very inconvenient."

Shabbir is not alone in this. Complaints about sewage mixed tap water are very common in Green Town, and the residents claim that this problem has persisted for over a decade now, and the people in the area have developed health problems because of it. Ali Hussain, a medical practitioner who runs a private dispensary near the 112 bus stop, says that the health toll has been massive. "Every day we treat two to three patients suffering from water-related diseases," he says, before briefly listing down some of the prominent health disorders prevalent in the area. His list includes kidney disorders, hepatitas, gastro. "Some people even get skin infections from prolonged exposure to the tap water," he adds, with a sigh.

Ali Hussain alleges that the issue is with the supply lines: "The fault lies with the supply lines which have not been changed since they were laid down in 1960s, and poor town planning; under the ground, sewerage drains intersect with water pipelines, allowing for leakage and mixing of clean water with sewage."

He further adds that all the steps taken by community members, from group complaints to in-person meetings with WASA representatives were met with hollow assurances from the civic entity officials. "They always tell us steps are underway to resolve the problem but it has been 10 years now and our tap water still reeks of sewage and continues to make people sick."

Master Waheed, a tailor who has been a resident of Green Town for the past 40 years, tells the story of his brother Tawhid who died two years ago due to kidney failure. Waheed says that the cause of his brother’s kidney failure was the contaminated water.

He reaffirms the widespread claim that the problem is with the supply lines which have not been changed in the past 60 years, and the residents have been paying the price of government inefficiency.

"The fault lies with the supply lines which have not been changed since they were laid down in the 1960s, and poor town planning; under the ground, sewerage drains intersect with water pipelines, allowing for leakage and mixing of clean water with sewage."

Even the Wasa officials do not disagree with the existence of the problem but disagree with its scale and cause. Baber Ali, an employee at the Chauraus Tanki Wasa office, the regional office overseeing water and sanitation in Green Town, claims that even though the piping was old, over the last decade about 90 per cent of the pipes have been replaced. "The problem persists because people have installed private taps on Wasa supply lines. These private connections damage the pipelines allowing for intermixing of water and sewage residues," says Baber Ali. "Secondly, the residents have installed water motors in their homes. The suction pressure  causes the sewage to be sucked into the pipelines carrying potable water".

Ironically, the monumental Chauraus Tanki in the Wasa office under which Babar Ali now sits has been decommissioned since 1993. The Tanki which supplied water to all areas of the division before 1993 was decommissioned because it was becoming ‘unviable’ and ‘unfeasible’. Ali says "due to a phenomenal growth in population in the area, the Tanki became inadept at meeting the total water demand of the residents. I remember, it used to take two hours for the Tanki to fill up and it took a mere ten minutes to empty it out."

After the decommissioning, a new water supply set up for Green Town was formulated under which a tube well was to be installed in each block of Green Town. These tube wells were to supply water to the households in the area. In addition to the intermixture of sewage and clean water, which takes place due to worn-out and poorly laid supply lines between the tube wells and the households, the tube wells themselves have started to churn out contaminated water owing to the depletion and contamination of the ground water.

The filtration plant at the 112 stop was installed by the local government to provide relief to the residents. Up until recently, it was being managed by KSB Pakistan, the local branch of a German private company, but recently a banner saying ‘This pump is not being maintained by KSB’ has been spotted at the place.

According to Kashif Manzoor, a KSB-Pakistan Operations Wing official, the Punjab government, under the CDWA project, had made a contract with the private company to import pumps to Lahore and run their operations and maintenance (O&M) processes for the duration of 3-5 years after which these pumps were to be taken by Wasa.

"We put up these banners only on pumps for which our contract with the government has expired," explains Habib, Kashif’s co-worker. "Otherwise, the disgruntled residents start pouring into our offices with complaints."

Habib attributes the problem to a "procedural delay by Wasa."

Senior Wasa officials at the Chauraus Tanki office reveal, on condition of anonymity, that since it was the LG & CD that originally came into contract with the KSB, the pumps are their responsibility, and Wasa has so far not received any request from the LG & CD in this regard.

It becomes far more complex if you consider the explanation the LG & CD has to offer. "We are not technical people," says Rana Safdar, Chairman UC-237, while sitting in a UC office adjacent to Wasa’s. "Our job is to secure funding from the provincial government and determine the sites for filtration plants. After that, Wasa takes over the installation of plants and oversees relevant procedures.

"Why does Wasa require any request from us when it was the one to install these pumps?" he asks.

Presently, the pump is being managed by Afzal Chaudhry, father of Khizar Abbas who was originally appointed to run the plant. When asked as to why he and not his son, the original employee, is operating the pump, Chaudhry comments: "In 2015, my son was hired by KSB to run the pump on a monthly wage of Rs6,000. At the time he joined, he was promised that after three years Wasa would take over the filtration pump and he would be given a permanent job in the organisation.

"Khizar has not received his salary for the past eight months, and Wasa has not taken over. I don’t know who my employer is," he adds. Which means that nobody would take responsibility if the pump was to shut down.

This is how precarious the condition is of a filtration pump which churns out approximately 40,000 litres of clean drinking water. And, while the powerful stakeholders -- Wasa, KSB, and the LG & CD -- bicker over who is ‘running’ the pump, dependant residents like Shabbir risk losing their only alternative to the sewage laden tap water which "can’t even be used for washing clothes, let alone drinking purposes."