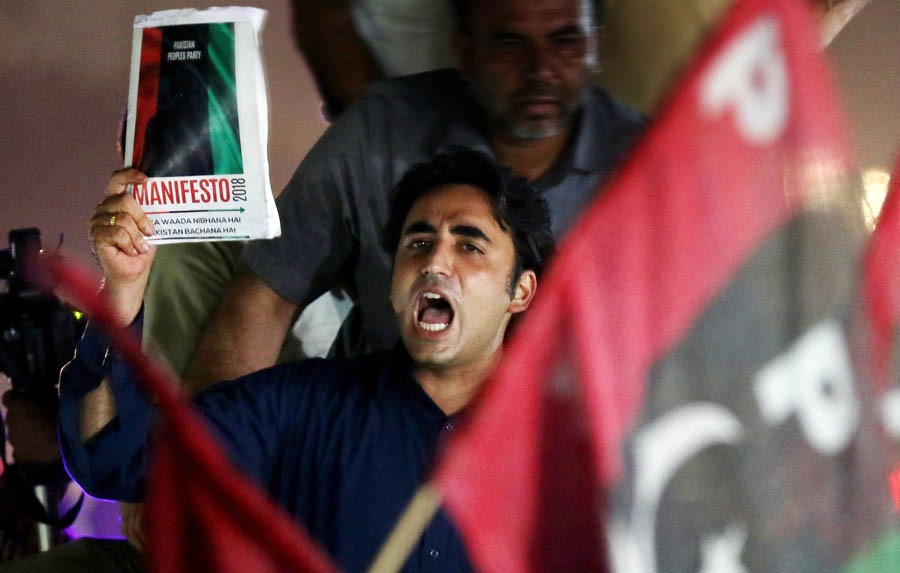 The general election frenzy is at its peak. The three major contenders have already launched their election manifestos, the latest by PTI on July 9. The print and electronic media is replete with the paid content by the political parties aiming for a "Naya Pakistan" or reminding about "BB ka Wada" or "Khidmat ko Vote".

While many would argue that political party manifestos are merely aspirational documents with a litany of vague promises and lofty rhetoric, it is also a fact that political parties seek the mandate to run the country (or a province) based on the agenda and programmes they plan to launch once voted into power. Thus, they can be held accountable for the pledges penned in these cure-all documents.

Of the 207 million population, as determined by the 2017 census, 106 million are registered voters (18 years and above). Nearly 15 per cent of these registered voters are above the normal retirement age of 60 years. More than 90 per cent of these 106 million voters are part of the working age population (15-64 years) and thus are the direct recipients and beneficiaries of the policies that will be crafted by the incoming government. These voters are either already part of the workforce or about to join or past the retirement age.

Services sector, a combination of various activities ranging from wholesale & trade to construction to transport & communication and others, is the dominant employer by engaging 42.4 per cent of the workforce followed by Agriculture (42.3 per cent) and Manufacturing (15.3 per cent). Labour force participation for women is only 28 per cent and the gender wage gap is 26 per cent. More employment is being generated in the informal sector (72.57 per cent), which is unregulated and unaccounted for. Three-fifth (60 per cent) of the employment in the country is "vulnerable employment" which is a combination of own-account work and unpaid contributing family work. Only 40 per cent of the 69 million labour force is employed as "wage and salaried employees". Nearly 70 per cent of these employees are employed without contract and only 50 per cent receive their wages regularly.

Of the 9 million formal sector workforce, only 1.4 million are unionised. While there are more than 7,000 registered trade unions in the country, only 1,400 have been able to sign collective agreements with their employer invariably leaving millions out of the purview of collective bargaining rights. Those trapped in the modern forms of slavery, as estimated by Global Slavery Index, are 2.134 million. Children engaged in child labour, though showing a declining trend, are still 3.93 million.

The incidence of occupational accidents is more than 4 per cent in the country and thousands of workers have lost their lives in this decade especially in mining, construction and manufacturing sectors. The private sector old age benefits institution (EOBI) has only 4 million active contributors (and is not sustainable beyond 2027) while only 1.8 million workers are registered with the provincial security institutions (to provide healthcare and other monetary benefits during employment).

Considering the sheer volume of working age population in the total registered voters, you would expect party manifestos to be full of plans for provision of decent work opportunities as envisaged under the Constitution. Considering that more than 25 per cent of Pakistan’s population is composed of youth (15-29 years), let’s first look at the employment creation, job placement and vocational training programmes.

Both the PTI and PML-N aim to create two million jobs a year over the next 5 years. Interestingly, the two parties, though focusing on the quantity, do not refer to the quality of jobs. As indicated in the statistics above, it is not that the employment is not being generated in the country. It is more in the informal sector, thanks to the casualisation and uberisation of jobs in the economy, and thus is not "productive and gainful employment" as required under SDG-8. The current employment that is characterised with slavery wages, hidden unemployment or underemployment, hazardous working conditions, discrimination and violence at workplace cannot be referred to as decent work. PPP, on the other hand, plans to provide public sector job to at least one member per family.

To regulate the labour market and effectively estimate demand and supply of labour, all party manifestos provide for employment exchanges - labour exchange (PTI), employment bureau (PPP) and placement centre (PML-N). All the parties have focused on enhanced skill development for youth. PML-N wants to expand Punjab Youth Internship Programme while PPP wants to start an Internship Guarantee Programme. It is interesting how none of the parties refers to reforming apprenticeship system already provided under the Apprenticeship Ordinance 1962 and expanding its coverage to the growing services sector instead of burdening the public exchequer by providing state sponsored internships. Similarly, youth (as well as women and other marginalised groups including persons with disabilities) employment can be generated through provision of tax incentives and other relief measures.

Since 42.3 per cent of the current labour force is still engaged in the agriculture sector, you would expect political parties to initiate legislative reforms bringing these workers under the purview of labour and social protection laws. For that purpose, the tenancy acts need to be updated. Only Sindh and Balochistan allow agriculture workers to form and join unions though implementing rules have not been formulated so far. There is nothing in the PTI and PML-N manifestos to protect the rights of agriculture workers though the PML-N manifesto refers to the creation of low and medium skilled jobs in the value added agriculture sector. The PPP manifesto deals with the issue quite comprehensively and plans to issue Benazir Kissan Card (for provision of benefits and subsidies) and Benazir Women Agricultural Workers Programme affording these workers all the rights of formal sector workers.

PPP once again stands out in dealing with all labour related issues, including the minimum wage/living wage, workplace discrimination, freedom of association, persons with disabilities, child labour, bonded labour as well as occupational safety and health. The PML-N manifesto only refers to "strengthening of labour and occupational safety laws". PTI has also focused on enacting further legislation on labour rights, harassment and protection of the rights of persons with disabilities.

In the area of social protection, PTI and PPP both refer to expanding the coverage of EOBI and Workers Welfare Fund. On the other hand, PML-N refers to issuance of Khidmat Cards through newly-established Punjab Social Protection Authority. It is interesting though that none of the parties refers to promulgating standalone legislation on discrimination (including workplace discrimination on the grounds of sex, religion, creed, caste or disability) and occupational safety and health (Sindh has already promulgated the law). Similarly, none of the manifestos refers to the reforming and improving of dilapidated labour inspection machinery. With the current number of labour inspectors around 500 in the country, there is only one labour inspector for every 18,000 formal sector workers.

There are many similarities in the manifestos of these political parties. However, it is only the implementation of these manifestos which will distinguish one from the other. The 69-million strong labour force has all the right to ask the political parties to honour the workforce by implementing such policies and plans which make the attainment of decent work a reality and not a distant dream.