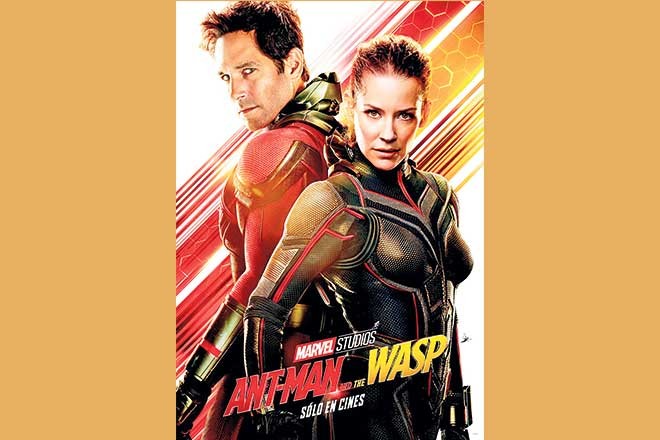 The movie picks up two years after Captain America: Civil War (and just before the events of the recent Avengers: Infinity War) and we find Ant-Man/Scott Lang (Paul Rudd) near the end of a two-year house arrest, sentenced for siding with Captain America’s rebel group. Don’t worry if you’re not up to speed with Marvel Cinematic lore - the movie catches you up quickly and, if you still find yourself a little lost, that won’t get in the way of your fun. Promise.

Scott wants to not do anything to jeopardise his freedom for his daughter’s sake (a very cute Abby Ryder Fortson) but finds himself sucked into helping Hank Pym (Michael Douglas) and ex-girlfriend Wasp/Hope Van Dyne (Evangeline Lilly) into rescuing his wife/her mum, Janet Van Dyne (Michelle Pfeiffer) from the quantum realm where she was lost many years ago. Further complicating matters are various villainous characters, including the dimensional phasing Ghost (Hannah John-Kamen) who want to steal the quantum technology from the Pyms and the FBI is hot in pursuit as well.

Freed of the need of a brand-new hero, which resulted in a clunky first Ant-Man movie, director Peyton Reed and his screen-writers (including star Paul Rudd) give us a fast-moving action comedy which delivers you almost non-stop laughs (a sequence involving a "truth" serum injected Michael Pena’s Luis – Scott’s friend and partner -  is an inventive hoot) and doesn’t skimp on the action either (Reed has a lot of fun with the rapidly changing sizes of people and objects throughout the movie). The plot is nothing universe (or even earth) shattering as everything is brought down to human (or even ant) scale but that is to the movie’s advantage after the heavy Avengers: Infinity War. Chief among the movie’s other charms is Rudd’s likable goofiness and he’s well supported by the rest of the cast. The movie’s mid-credit sequence will elicit a gasp while the end-credit scene is a big (but fitting) raspberry in the audience’s face.

Cut to chase: Small scale for a superhero movie but big on the laughs.

Leap came out a little while ago but it might have escaped your notice not being a Pixar/Disney or DreamWorks production. But, despite its predictability, this French-Canadian co-production is actually a quiet little charmer. Orphaned Félicie (Elle Fanning) dreams of going to Paris and becoming a dancer. So, she runs off with her best friend, Victor (Nat Wolff), a would-be inventor. Félicie gains admission to the prestigious Opera Ballet School in Paris under false pretences. Enthralled by her glamourous new world, will Félicie lose Victor’s? Will her secret be revealed? Will she be able to compete with the conniving Camille Le Haut (Maddie Ziegler)? What’s the truth behind the school’s dour custodian, Odette (Carly Rae Jepsen)? None of the answers to these questions will surprise but it’s all done quite well with elegant animation, catchy songs and some good laughs. Not too bad a way to while away your time. Cut to chase: Predictable animated film but charming enough.