"The State shall provide free and compulsory…"

Not-for-profit organisations such as Door of Awareness are toiling to provide free education to children in slum areas, putting the government institutions to shame 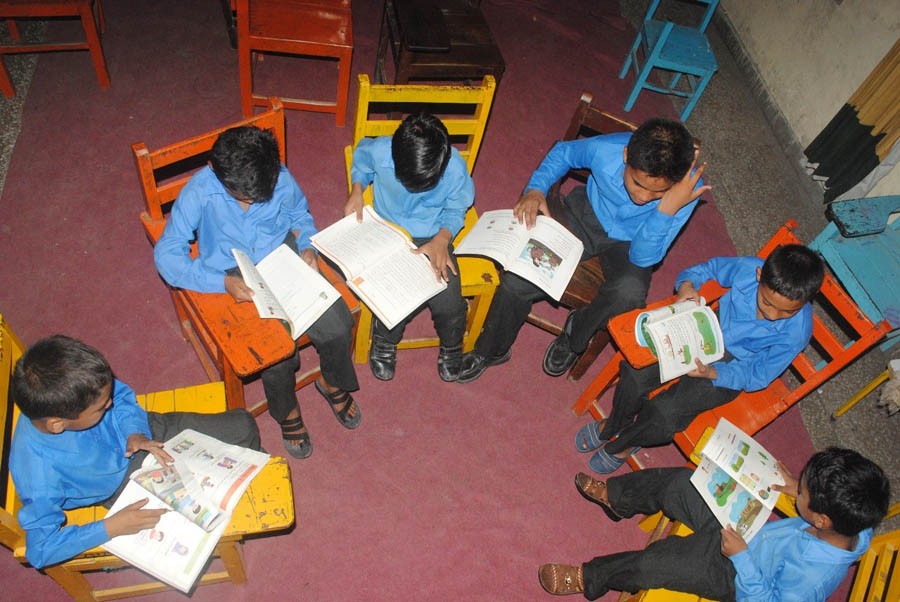 From 1998 to 2001 I was studying in a junior high school in Canada. It was a place that attracted children from all sorts of backgrounds, without discrimination. However, on my return to Pakistan I found that things were quite different.

There are two systems operating in Pakistan: students in private schools get a syllabus, set of activities, fee scale, and an English-medium course, which is different from what is offered in public sector institutes. But the latter have the obvious advantage of being ‘affordable’. Not to forget, the madrassah students who work with altogether different curriculums.

A section of society that remains utterly neglected when it comes to basic literacy is based in slums (or katchi abadi). The people here eke out their living by collecting garbage, sweeping the streets, cleaning sewerage pipes, washing cars, or begging for alms. A school for the children in these extremely poor localities is, hence, worth commending.

Door of Awareness, in Model Town Extension, is a not-for-profit organisation that runs as many as 18 schools for children in slum areas, and provides them free education. A project of Ruba Humayun, the organisation began with a small setup in 2007, going into the slums and trying to gather children to study under the shade of a tree. Proverbially put, there’s been no turning back for her.

Today, 12 of their schools boast 1,600 (or above) students who are pursuing the Punjab Textbook Board curriculum. Interestingly, girl students outnumber the boys. Six schools are being run by donors or people who have adopted them, while another five are under construction.

Speaking to TNS, Humayun said, "We offer education to these children without any expectations. Our schools have been set up in slums, low-income households in rented premises, and the buildings that house the upper middle class."

Door of Awareness also provides vocational training, especially to girls, such as stitching and handicraft work. They have also trained some of the students as beauticians; a couple of them have already started their own parlour businesses, while a few are employed at different beauty salons.

An important aspect of their training is educating the students about personal hygiene and related issues as most of them have little access to running water and other cleanliness tools.

When asked about their success rate and the challenges faced, Humayun said that the girls and boys usually drop out of school in class six or seven as the girls attain marriageable age while the boys reach the stage where they can start to earn a living. There are very few who continue with studies and work.

Gulistan e Saida Trust School is another institute that is working on similar lines. Owned and run by Justice Nasira Iqbal, daughter-in-law of Dr Allama Muhammad Iqbal. She is a jurist and Law Professor and has served as a Judge of the Lahore High Court from 1994 to 2002.

Gulistan e Saida is located off Hali Road in Gulberg, Lahore, and has about 150 children from the surrounding katchi abadis. It’s a day school, and hence faces similar issues about children dropping out.

A girl child, who was standing in a corner while Miss Rehana, the supervisor, spoke to me, came forward and shook hands rather enthusiastically. She was from a katchi abadi near the nullah. Her name was Annie, and she was a chirpy child with a lot of energy. She asked a lot of questions as to why I was there. Then she explained how she and her family live in the slums. She said that her father collects rubbish while her mother works in nearby houses.

All organisations or groups that work for the education of children in slums face issues in convincing their parents most of whom do not value schools; they would rather send their children to work, which basically falls under child labour.

Another issue that was highlighted by a mother, named Naheed Allah Ditta, who lives in a ‘jhugi’ and was not interested in sending her children to school, was the issue of trusting the people who visit the slums and try to promote education or skills because there have been instances in the past where such people have used the children for their nefarious designs.

There are other schools that are catering for the underprivileged communities, but the problem is sustenance that includes maintenance of infrastructure, provision of stationary and uniform, and upkeep of furniture etc. The level of education needs to be checked, too. The teachers that are hired must be properly trained for the job, and motivated enough. Their pay should be according to the market averages, among other things.

When contacted, most officials in the Punjab Education Department weren’t willing to talk on the issue. However, one of them said, on condition of anonymity, that all these institutions are run by non-governmental organisations; as such they are supposed to be registered with the education department which has a loose check on their workings.

The official did not know how many such institutions are working in Lahore alone. According to the various laws and statutes these organisations are supposed to submit regular performance reports to the registration authorities, so that their activities can be monitored. However, it is not confirmed if the needful is being done.

Pakistan is signatory to United Nation’s Sustainable Developmental Goals (SDGs), wherein it is supposed to achieve inclusive and equitable quality education for all vulnerable populations, including persons with disabilities, indigenous people, refugee children, and poor children in rural areas by the year 2030. Imparting education to the youth of the country is government’s responsibility, according to the Pakistan Education Statistics 2016-17.

The political parties’ manifestos in the election 2018 feature education as one important agenda item. But the percentage of GDP allocation to this sector is not very clear, and how the party that comes into power shall impart education to the children who live hand to mouth on a daily basis.

"The State shall provide free and compulsory…"

When you hit the road