Politics around the pivot of history

This time with China needing Pakistan more than the other way round, Islamabad should not step into the role of a typical proxy state. Sovereign equality must guide us! 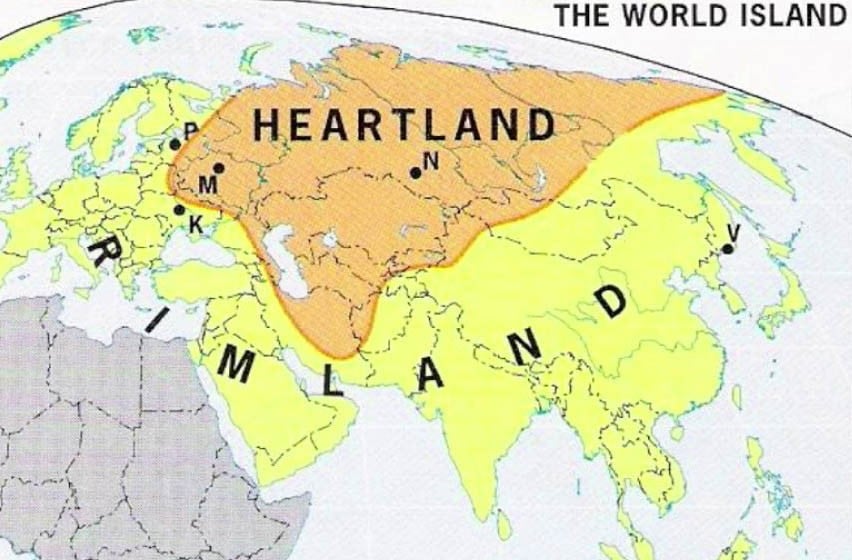 There are competing perspectives, all laying claims to make politics intelligible and predict it better than its competitors. One of these perspectives is H J Mackinder’s Heartland theory which helps us explain the way politics has been evolving in the South Asian, South West Asian and Central Asian contexts. Mackinder famously said, "Who rules East Europe commands the Heartland; who rules the Heartland commands the World-Island; who rules the World-Island commands the world".

Mackinder put forward three heartland theses, each slightly differing with the other. The geographical extent of heartland was equivalent to Great lowland (Western Siberia, Turkestan, the Volga basin of Europe terminate some 300 miles north of the Caspian), Iranian Upland (Persia, Afghanistan and Balochistan) and East Europe, stated Mackinder in his 1919 book titled Democratic ideals and reality. World Island, the joint continent of Europe, Asia and Africa, constituted two regions. Heartland and the rim land alternatively form the inner crescent comprising Arabia, Western Europe, India and East Asia. Rim land made up to 1/5 of the world Island’s area and 4/5 of its population.

Writing in 1904, Mackinder believed that Russia, being the pivot state or the core of heartland, held the central strategic position. Germany had the same strategic importance in Europe. Save for its western flank adjoining Eastern Europe or North German plain by extension, Heartland was surrounded by natural barriers by its northern, southern and eastern flanks. Mackinder reasoned that after its collapse in 1917, Russia lost the capacity to dominate the heartland. It was Germany that was the prime candidate for the heartland dominance hence the first statement in Mackinder’s triad, "who rules East Europe commands the heartland".

Mackinder’s Pivot Area is alternatively also called as both the core of Eurasia (1904) and Northern heartland (1919). Mackinder called the core of Eurasia as "Pivot Area because, in his Eurocentric gaze, the history of the world pivoted around the sequence of invasions out of this region into the surrounding areas that were more oriented to the sea", as to quote Collin Flint. Mackinder recounts how China, India and vast stretch area of the five seas--Caspian, Black, Mediterranean, Red and Persian--had to submit, at various times,  to the invasions from Manchus, Tamerlane, Seljuk Turks and Mongols, all originating from the heartland.

BRI, a $100 billion dollar programme, is China’s economic and geopolitical agenda. Beijing’s success with regard to its integration of the regional economies around Eurasia with that of China’s would mainly depend upon peace in Afghanistan, something that does not suit the American interests.

By Mackinder’s 1919 estimates, the world island, the joint continent of mainland Europe, Asia and Africa, consisted of 2/3 of the world’s landmass and 7/8 of its population. He said that whichever country or an alliance dominated world island would rule the world. Thus, what Mackinder said, "Who rules the World-Island commands the world."

Till 1900, advancement in naval technology had enabled rim land states to be comparatively more powerful than land powers. Ships travelled faster and farther and the latter lacked in strategic flexibility unlike in the case of naval powers. Nevertheless, this was fast changing according to Mackinder as it was the laying of modern railways that shifted the balance of power from the sea powers to land powers. Although railways, in their rudimentary form, existed as far back as 6th Century BC, the prototype of railways is traced back to 1830 with the founding of Liverpool & Manchester Railway in the north-west of England only to develop a national network of railways across the country.

Writing in 1904, Mackinder maintained that trans-continental railways were immensely remedying the adverse conditions of land powers, which hitherto were dependent upon horse and camel mobility unlike the sea powers that had relative edge in terms of mobility by access to steam and Suez Canal. Nowhere were the effects of railways as transmuting as in the Euro-Asia, a region that was inaccessible to ships but lay open to horse-riding nomads in the past.

China’s Belt and Road Initiative (BRI) is an intended enterprise of six economic corridors, of which China Pakistan Economic Corridor is a flagship project, straddling 60 countries in Asia, Europe and Africa. BRI, a $100 billion dollar programme meant to spend money on rails, roads, bridges and energy projects, is China’s economic and geopolitical agenda. Beijing’s success with regard to its integration of the regional economies around Eurasia with that of China’s would mainly depend upon peace in Afghanistan, something that does not suit the American interests. Peace at the court of Kabul would only give China an easy access to Central Asia and Russia, the latter being the traditional core of heartland. Such a scenario would not necessarily mean China dominating the world though it would definitely be a step in that direction.

Pakistan’s foreign policy towards China must not be a throwback to either Cold War days or post 9/11 era when Islamabad, a typical proxy, largely depended upon aid and finances from Washington and western financial institutions without due recourse to indigenous sources of development. This time with China needing Pakistan more than the other way round, Islamabad should not step into the role of a typical proxy state. Sovereign equality must guide us! This is perhaps only possible when the locus of decision making is the elected institutions of the state. It should not be the state of Pakistan only but also the society of Pakistan that should equally prosper!

Politics around the pivot of history