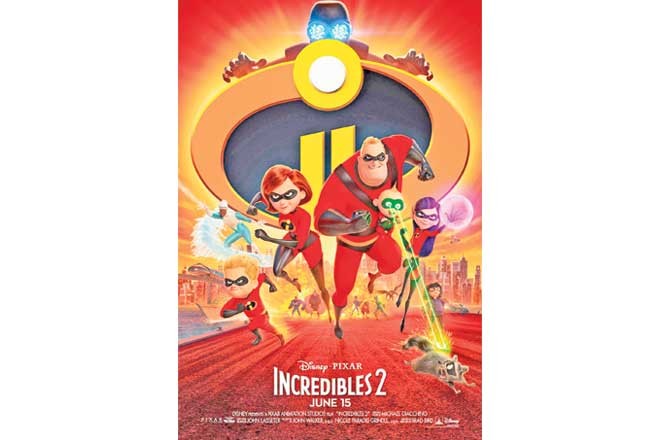 14 years ago, writer/director delivered a home run with the first Incredibles (the family of superheroes forced into retirement and hiding when all superheroes are banned) movie. Brilliant animation combined with a script that showed its respect for superhero lore and tropes while also affectionately poking fun at some of them. The movie also explored family dynamics and mid-life crises all the while delivering big laughs. The sequel also delivers more of the same - just slightly less successfully. The animation is still great but the novelty is gone and Bird doesn’t quite find enough new material to mine.

Still, what is there is quite enjoyable. The movie picks up almost from where the original ended and throws you right into a dynamic action sequence. From there our superhero family once again finds itself on the outs with the law and facing penury and a life of ennui until an overly ebullient billionaire Winston Deaver (Bob Odenkirk) comes along with a plan to rehabilitate superheroes in the eyes of the public. His scheme involves putting Elastigirl (Holly Hunter) front-and-centre which leaves Mr. Incredible (Craig T. Nelson) to be a stay-at-home dad, looking after their three kids, including the baby Jack-Jack (the movie’s secret weapon) and his suddenly burgeoning powers. This leads to some quite funny stuff and the chaotic throw down between Jack-Jack and a feisty raccoon is hilarious and an immediate classic.

However, by the end, as supervillain Screenslaver turns up to foil Winston’s scheme, the movie’s series of action sequences (though all well done on their own) start to blur into one another and you also feel that the other elder two Incredible kids don’t get enough screen or development time. There’s also the feeling that if not for the Incredibles and other superheroes coming out of hiding there wouldn’t have been this particular supervillain problem to resolve.

Cut to chase: Great fun - just not as incredible as the original.

Rajkumar Hirani is a modern-day Frank Capra. Not only is he a very, very good storyteller (with an excellent grasp over comedy and audiences’ emotional buttons) but his worldview mirrors that of the legendary Hollywood director: basic decency will eventually overcome all the nastiness and evil in this world. Because Hirani is so good at what he does he makes it mostly work but his movies can also come across as a tad simplistic in these modern times. The same holds true for Sanju, Hirani’s biopic of Sanjay Dutt.

While not completely avoiding Sanjay Dutt’s troublesome history, Hirani doesn’t really scratch too far beneath the surface either. His Sanjay Dutt is a man-child from beginning to end, getting into trouble (drugs, women, gangsters, etc.) despite his good intentions, led astray by some bad influences, his mistakes magnified by an unscrupulous media. The movie works overtime to rehabilitate the star’s public image and, to that extent, mostly succeeds (just don’t take it for the whole truth).

Along the way, Hirani and his cast deliver some good laughs and even elicit a tear or two at the end. Ranbir Kapoor is excellent in the title role, transforming himself inside out to capture the essence of Sanjay Dutt. Paresh Rawal, however, doesn’t look anything like Sanjay’s father Sunil Dutt (the senior Dutt was a much more of a strapping figure) nor does he sound Punjabi enough (despite this repeated use of the word ‘puttar’ but eventually Kapoor and Rawal work out their tango enough to move in lockstep and very effectively so. Of the rest of the cast I particularly liked Manisha Koirala’s Nargis. In a small role Koirala manages to deliver a complete person - brave, loving and with an engaging sense of humour.

Cut to chase: Enjoyable enough – some laughs, some tears wrapped in a somewhat simplistic package.