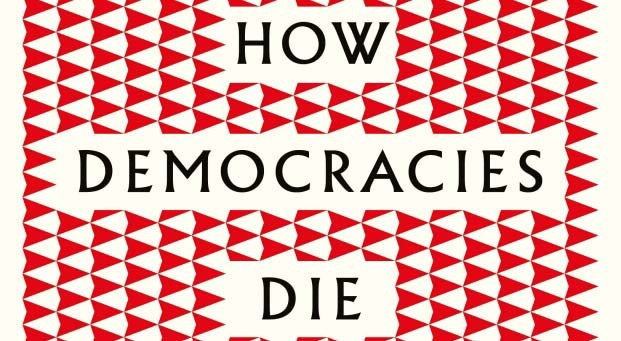 ‘Saving democracy’ has been the rallying cry of just about everyone with any aspirations for power in Pakistan. This often includes the most undemocratic of forces, which use many of the indicators underlined in How Democracies Die to undermine the very system they claim to uphold.

How Democracies Die, authored by Daniel Ziblatt and Steven Levitsky, was released to coincide with the first anniversary of the Donald Trump regime in the US and dissects the ‘how did we get here’ question. And while the book is dedicated to underlining the threats that democracy in the US currently faces, delineated through historical juxtapositions, the book has important insights for Pakistan -- especially in an election year.

The book kicks off by setting up its premise, with the principal argument being that while blatant autocratic forces have caused the more obvious damage to democracy on the surface, the abetment from the insiders is a different animal in terms of menace.

"Democracies may die at the hands not of generals but of elected leaders--presidents or prime ministers who subvert the very process that brought them to power. Some of these leaders dismantle democracy quickly."

The writers argue that overtly autocratic regimes are fading across the world, giving way to authoritarianism of a different ilk.

"Blatant dictatorship -- in the form of fascism, communism, or military rule -- has disappeared across much of the world. Military coups and other violent seizures of power are rare. Most countries hold regular elections. Democracies still die, but by different means."

The book underscores examples from history, underlining how ‘outsiders’ usurp power through a combination of naivety and ignorance of the political elite. Venezuela and Hugo Chávez is an oft-cited example throughout the chapters, and how the movement against a ‘corrupt governing elite’ with the promise to build a ‘more authentic’ democracy, eventually summoned a dictatorial regime.

This, of course, would echo in the eardrums of Pakistani political observers as not only the age old justification for military hegemony in the country, but also the fact that it is eerily similar to rallying cries that have been dominating the narrative in recent elections.

As Pakistan looks to complete a decade of democracy -- at least as a front -- it should start focusing on creating its own guardrails in a global environment.

The book was inevitably going to feature the paths that Adolf Hitler and Benito Mussolini took as the former’s seizure of the Reichstag and the latter’s March on Rome were the culmination of populist waves, that seamlessly merged with a violent fascism. This too has parallels in both the past and present of Pakistani political engineering.

The first chapter ‘Fateful Alliances’ argues that the rise to power of populist demagogues is aided by the succumbing of the political players, whose shortsightedness can often result in long-term damage to not just democracy itself, but the very foundations of states.

The book cites examples from Finland and Belgium when the fascist wave was taking over Europe a century ago, and Austria as recently as 2016, and how judicious politicians sacrificed temporary gains for themselves, or their parties, to forestall the rise of marauding autocrats.

"When faced with the rise of extremists or demagogues, they make a concerted effort to isolate and defeat them. Although mass responses to extremist appeals matter, what matters more is whether political elites, and especially parties, serve as filters. Put simply, political parties are democracy’s gatekeepers."

In Pakistan, it is these parties that have ensured military hegemony and downplayed parliamentary supremacy in a bid to get a slightly bigger share of the power pie, while touting political opponents as ‘enemies’ of the state.

In fact, the book argues without citing Pakistan as an obvious and ominous example, that for many, political disagreements do not amount to the rivals becoming actual enemies.

"As commonsensical as this idea may sound, the belief that political opponents are not enemies is a remarkable and sophisticated invention."

Despite not being particularly voluminous, the book still does manage to run around in circles. But it makes two crucial contributions to the philosophy of democracy and its near future.

The first of these focuses on what made Donald Trump possible in 2016, and how such conditions had actually existed in the past as well, only to be thwarted by the various ‘guardrails of democracy’.

"America’s democratic institutions were challenged on several occasions during the twentieth century, but each of these challenges was effectively contained. The guardrails held, as politicians from both parties -- and often, society as a whole -- pushed back against violations that might have threatened democracy."

One major ‘guardrail’ that the writers underscore are the unwritten rules of democracy in the US, comparing them to street basketball, that unlike the NBA or NCAA, isn’t codified but universally accepted-- any breach in which would be immediately rejected by anyone participating in the game.

Another factor behind the rise of Trump in the US is the post 1968 reformed presidential primary system, presenting the paradoxical argument that it is actually ‘too much democracy’ that eventually dealt a blow to democracy.

But the book takes the Republicans to the task -- an entire chapter, ‘The Great Republican Abdication’ is dedicated to it -- and argues that had they sidestepped their personal interests at the time Trump was blazing towards the party nomination, the US could’ve been saved from him.

The second significant contribution -- even if neither original nor extensive -- is that the book provides four behavioural warning signs to discern an authoritarian.

"We should worry when a politician 1) rejects, in words or action, the democratic rules of the game, 2) denies the legitimacy of opponents, 3) tolerates or encourages violence, or 4) indicates a willingness to curtail the civil liberties of opponents, including the media."

"They tell voters that the existing system is not really a democracy but instead has been hijacked, corrupted, or rigged by the elite. And they promise to bury that elite and return power to "the people."

While other countries, including Pakistan, would find themselves on the various stages depicted in the book, the authors underline three possible futures for a post-Trump America.

"The first, and most optimistic, is a swift democratic recovery… A second, much darker future is one in which President Trump and the Republicans continue to win with a white nationalist appeal… The third, and in our view, most likely, post-Trump future is one marked by polarization, more departures from unwritten political conventions, and increasing institutional warfare-- in other words, democracy without solid guardrails"

As Pakistan looks to complete a decade of democracy -- at least as a front -- it should start focusing on creating its own guardrails in a global environment, decreasingly conducive for pure democracy, all the while fighting the monsters of its own past.