An unforgettable last chat with Aslam Azhar, or ‘Aslam uncle’ to be more accurate 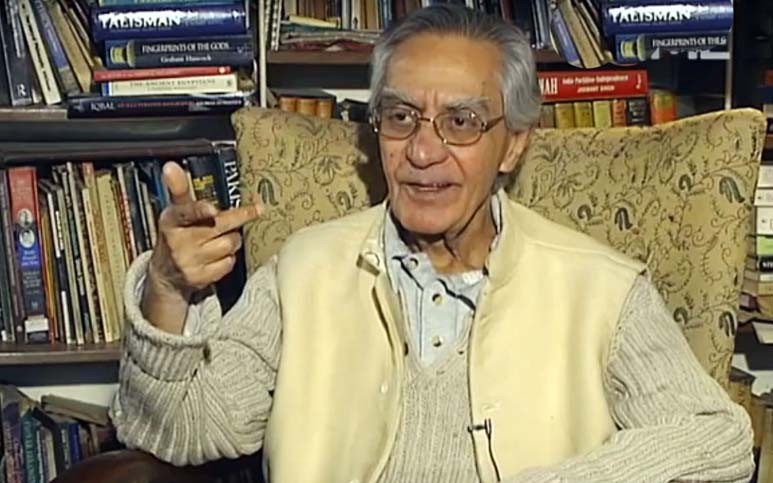 In 1983, my father met and became friends with a legendary man. The man was Aslam Azhar, the founder of Pakistan Television. As a 10-year-old girl, I didn’t know the difference between television and Pakistan Television, and felt privileged to meet the person who had ‘invented’ tv. A 51-year-old handsome man with a voice and persona that overwhelmed many, I, too, was captivated by Azhar’s style and charisma when I was introduced to him.

In 1964, Altaf Gohar who was the Information Secretary during Ayub Khan’s regime convinced Azhar to take up the task of establishing Pakistan’s first television station. He was then sent to Japan in the first week of August to learn how a broadcast system was run. After his three week stay, he came back and got married to Nasreen in September and moved to Lahore from Karachi to set up a station there. Pakistan’s first television station began transmission on November 26, 1964 under Aslam Azhar’s supervision.

When the military dictator General Zia-ul-Haq declared martial law in 1977, and several people were dismissed from government jobs, Azhar, being a progressive leftist, was also dismissed in March 1978.

Azhar then moved to Karachi and started a drama group called Dastak with Mansoor Saeed. They gathered an enthusiastic group of people from different walks of life. With minimal resources, he directed street plays that highlighted important social themes and responded to the prevailing political scene.

Azhar and his family enjoyed hosting friends at their house. A New Year’s Eve celebration was, and still is, a ritual at his house. Nihari, being Azhar’s favourite dish, was the main item served at gatherings at their home. Many members of Dastak belonged to middle and lower middle class including myself, but one never felt left out at his place.

Just a few days before his death, I had the privilege of meeting and talking to Aslam Azhar about his life. Little did I know this would be my last interaction with him. Nasreen had invited us over to their place to celebrate Christmas because Aslam uncle’s attendant ‘Khan’ was a Christian.

He had not opened up about his life like this before nor did I have the courage to ask him such personal questions.

Aslam uncle spoke about his early days with fondness. "I was born in 1932 in Lahore. I attended an all-boys school called Central Model School and studied there till matriculation. I was a good student who was fond of reading from a young age. I also took part in debates and received medals for my performance. Since there were no females in school, I didn’t get a chance to flirt with girls until 10th grade," he exclaimed with his typical rambunctious laugh.

"However, I would sometimes bunk classes with friends. Government College Lahore was my next destination where I studied for the next five years. But my passion for debating didn’t fade and, soon enough, I had become a well-known debater," he kept nodding his head as if deep in thought.

When I asked Aslam uncle about any particular aspect of his personality that made him stand out among his peers, he replied, "I think it was my voice, it drew a lot of people towards me, especially women…"

"I was however similar to other boys in their twenties. I enjoyed watching Hollywood movies. Good Earth was a personal favourite which I watched many times, while Deborah Kerr was one of my favourite actresses. I also enjoyed the company of intelligent women and could not stand artificial people. The knowledge that I gained from books on a wide range of topics was my asset because it gave me knowledge, and thus, confidence over others." he glanced towards the books on his side table.

As Aslam uncle caught my eyes on his cigar, he almost predicted my next question. "I started smoking in the last year of college. In England, I began smoking a pipe and continued to do so until my doctor prohibited. Cigars were my next choice; I like its aroma and therefore continue it till today."

"While studying in Cambridge, I fell in love with a German girl named Lilly and we tied the knot in 1953. The marriage couldn’t last long and we got divorced within seven years due to personal issues. We have a daughter Yasmeen who lives in Germany.

"I came back to Lahore in 1960 and joined Burmah Oil Company. The company posted me to Karachi again. Theatre was my passion so I joined a theatre group called The Karachi Arts Theatre Society of which Nasreen was already an active member. I started spending time with Nasreen. We would go out for long walks and watch movies together. This was the most beautiful period of my life. In Nasreen, I found a companion and soul-mate. We got married in 1964. Our comfort zones were quite similar which made life easier and that is the reason we are still together.  With Nasreen, I had three lovely children: Usama, Arieb (a renowned Sufi singer) and Umaima."

Azhar lived a fulfilling life on his own terms. At age 32, he saw success. However, he was not a materialistic man; despite holding a powerful post, he did not make money or property. For him fulfillment in life had nothing to do with material gains. In his last years, he preferred a life of solitude and privacy. He carried a treasure of knowledge and wisdom with him to his grave.